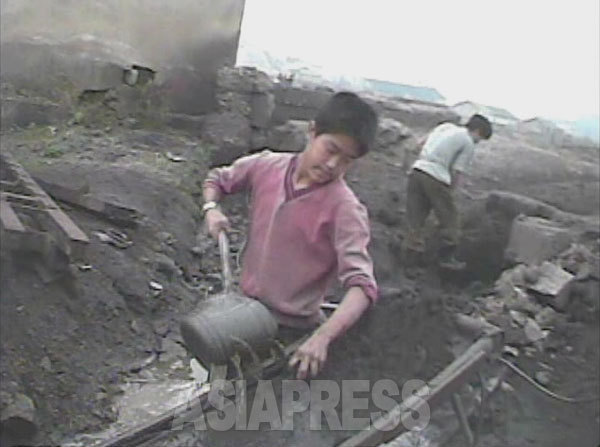 The discovery of large amounts of gold dust in a northern river is said to have triggered a sudden “gold rush”, with local authorities, farmers, and workers in a scramble for riches.

According to a reporting partner in Ryanggang Province, who spoke with ASIAPRESS on July 4, the discovery of gold dust was made during the building of a hydroelectric power plant in Dancheon City, South Hamkyung Province, when water was temporarily diverted from upstream areas for construction purposes.
Next page : ◆ Financially stretched regime looks to…

Next Page： ◆ Financially stretched regime looks to exclude residents from profits
1 2
Facebook Twitter はてブ Pocket Feedly
RECOMMENDATIONS
＜Inside N.Korea＞ Expansion of the market economy as the driving force behind social transformation--based on sources from inside N.Korea. (PART6) Collapse of the food rationing system weakened control over the people. by ISHIMARU Jiro
2016/Dec/27 5 Social transformation caused by the expansion of the ma...
Fishy Business: Will Resumed Smuggling at the Chinese Border see a Return of the North Korean ‘Ghost Ships’?
◆ Illegal fishing in Russian waters draws gunfire On October 7, a Nort...
Optimism in North Korea: As Poverty Spreads Residents Start to Play Down the Pandemic…"COVID is like the common cold" and "Eating garlic will keep us safe"
While the North Korean authorities advertise that they are maintainin...
＜Inside N. Korea＞ Lockdown Blues: Residents Grow Anxious as Quarantine Authorities Forcibly Seal Off Entire Neighborhoods for 20 Days
◆ Special alert issued at the end of July In North Korea, strong count...
＜Inside N. Korea＞ “Don’t Tell Anyone...”: Censors Scramble as Overseas Laborers Return Home with Whispers of the Outside World
According to multiple reporting partners living in the northern part o...
＜Interview with a N. Korean Woman＞ "I live with goats and pigs in my apartment" The desperation driving people to raising animals at home
Many North Korean city dwellers are raising goats, pigs and chickens i...