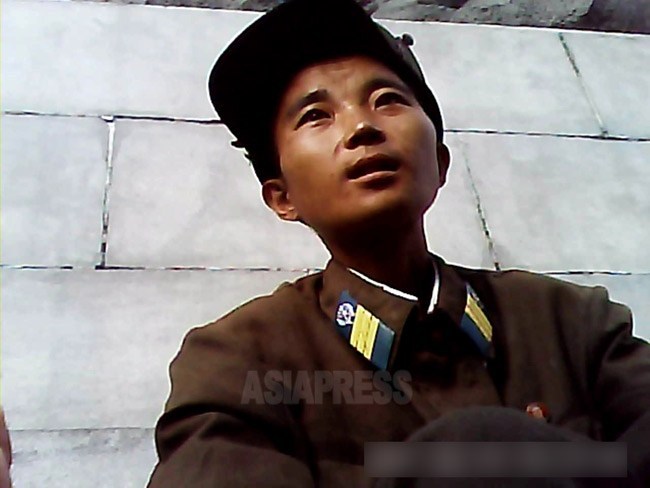 Loosely fitting uniform around neck. A 30-year old noncommissioned officer said that he was on his way to home because of malnutrition. He belonged to a construction corps. Taken at Northern region on August 2013. (ASIA PRESS)

◆ Hunger of soldiers started from 80’s.

Lee Sang-bong, a defector from North Korea in Japan said: “Soldiers ate their fill until around 1975. Meal was composed of 800gram of half of rice and mixed grains with egg and even meat. Soldiers were of sturdier build than civilians. Without completion of military service, it was not possible to be a member of Worker’s Party, thus no opportunity to succeed in the society. The parents urged their sons to join the military. Deterioration of the military meals began at the early of 80’s. It was from around “the March of Hardship” in the 90’s when the death from starvation in the military began.” It is a generally agreed opinion of elderly people in North Korea.
Related article: <Kim Jong-un’s Starving Soldiers – “Just a spoonful of oil for me…” A soldier pleads for grace> 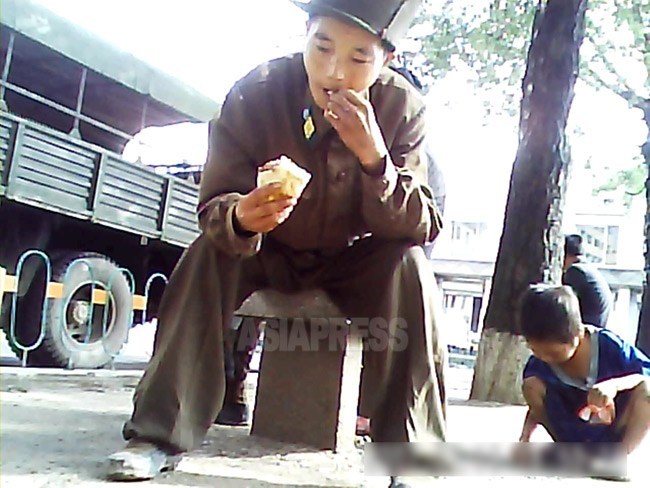 The noncommissioned officer said “(so hungry) just spoon of oil, please.” The reporter was unable to stand and gave him a bread. He just snapped up and took it to his mouth. A poor child was picking up crumbs. Taken at Northern region on August 2013. (ASIA PRESS)

Next Page： ◆ Widespread starvation in construction corps
1 2
Facebook Twitter はてブ Pocket Feedly
RECOMMENDATIONS
＜N. Korea Interview＞ “Nobody Knows, Nobody Cares”: Workers’ Party Official Surprised to Learn of Leader’s Surgery, Reports No Changes Within N. Korean Society
Information has been spreading around the world since April 21 of Kim ...
The Spread of "Impure Recordings" Lead to Executions in Hyesan and Chongjin City
2013/Dec/05 Written by ISHIMARU Jiro Across North Korea, from the end ...
＜Latest Report from N. Korea＞ Regime Aims to Block Coronavirus at Border as Local Hospitals and Populace Remain Woefully Unprepared for Potential Outbreak
The North Korean authorities have announced through state media that t...
＜Inside N.Korea＞ Expansion of the market economy as the driving force behind social transformation--based on sources from inside N.Korea. (PART7) Information from outside being commodified and spread across the country. The government is losing control of the movement of citizens. by ISHIMARU Jiro
2016/Dec/28 5-3 The control of information is being weakened The Nort...
＜Inside N. Korea＞ Scarier than the police...Housewives turned “people’s units” leaders are now becoming more powerful as key resources used by N. Korea to control its population
Starting this year, North Korean authorities have increased the roles...
＜Inside N. Korea＞ Candle in the Wind: Burner Phones Bring Freedom of Communication But Now Face Crackdown
Many people in North Korea use burner phones, bought under the names o...