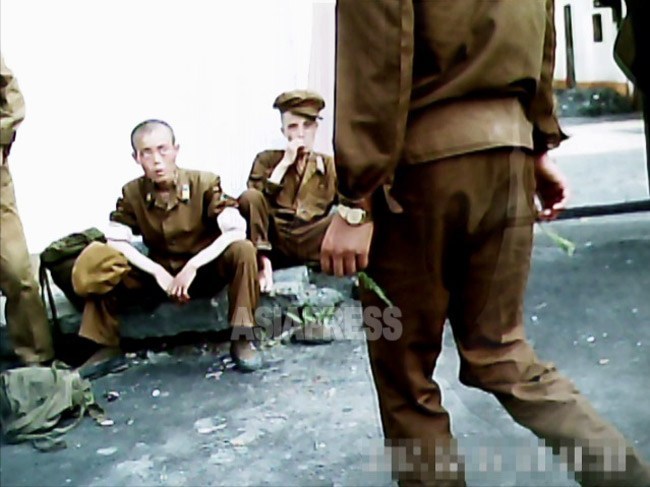 Emaciated soldiers, like skeleton, of construction corps. were on the move to be hospitalized because of malnutrition. Taken by Koo Gwang-ho at South Pyongan Province on July 2011. (ASIA PRESS)

Especially, the construction corps for the civil engineering work has the highest rate of malnutrition. It is called “Engineering Corps” or “7th or 8th Department.”

Kim Dong-cheol, a reporting partner in North Korea, explains “They provide the meal as stipulated. But the problem is too much labor.”
Related article: 〈Photo Report 5〉 Malnutrition Rampant Among The People’s Army

Assigned soldiers to the construction corps spend their whole military years while using shovels and pickaxes without any exercise of shooting during their 11 years of service. They insist that all these are for the country, but in reality the young North Koreans are forced to provide their labor to the state for free. (ISHIMARU Jiro)

A young soldier got so emaciated as to have his uniform loosely fit. He was on evacuation trip to a hospital because of malnutrition. He belonged to a construction corps. Taken by Koo Gwang-ho at South Pyongan Province on July 2011. (ASIA PRESS)