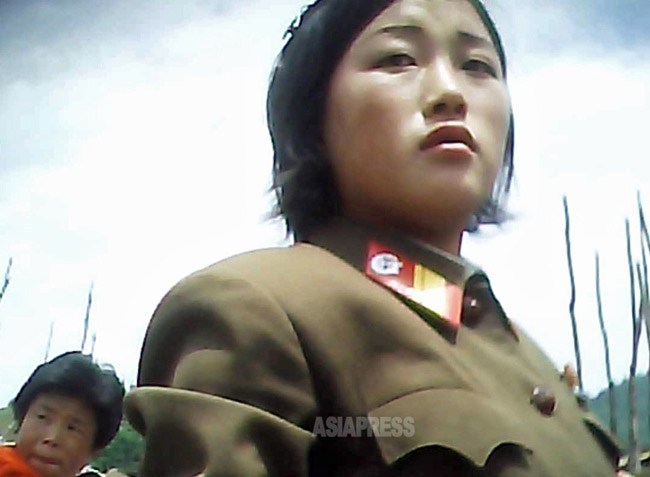 The proportion of female soldiers in North Korea’s military has been rising recently. Some report that the proportion is as high as 40 percent. This photo shows a female soldier who has come to buy goods at a street market. Photographed in Ryanggang Province in June 2013 by ASIAPRESS

North Korea’s military enlistment process begins in early April. Each spring, 17 year-old boys and girls, freshly graduated from high school, will gather in their new military uniforms for a ceremony attended by parents and local residents.

The ceremony for the “glorious enlistment in the People’s Army” is meant to be a celebration but, for the parents of new recruits, the occasion can bring an array of emotions. Though the People’s Army allows soldiers to visit home for certain holidays, parents are unlikely to meet their child often over the next 10 years. Beyond that, parents are deeply concerned about the harsh barracks lifestyle that their children will experience following enlistment.

The most disturbing of parent’s concerns is malnutrition, a particularly common problem in the military. This concern is accompanied by the fear of their child falling victim to an accident or to sexual harassment- a major issue for enlisted women in particular. This year, parents were temporarily put at ease, as the enlistment process was postponed due to the coronavirus. An unceremonious farewell, however, came in late April.

According to a reporting partner who investigated the effect of the coronavirus on the recruitment process from April to June, “This year’s recruits were deployed sequentially since late April without a farewell ceremony. Boot camps in each region provided accommodation and 20 days of training. Recruits who showed no signs of coronavirus infection were incorporated into units and squads following training. During the training period, all recruits were prohibited from leaving the bases. They were also not mobilized for farming efforts in the countryside. This was to prevent coronavirus from spreading to the unit and to avoid unnecessary contact with civilians. Because they were strictly quarantined, they could not leave to buy food with the money given to them by their parents, even if they were going hungry.”

What is the status of recruitment in North Korea? In the last report, ＜A Look at Korean People’s Army Recruitment through Secretly Obtained Documents (Part 1): 13 Years of Stolen Youth> , ASIAPRESS examined official documents regarding the enlistment process.

Through a reporting partner in North Korea, ASIAPRESS acquired a document internally-disseminated by the Workers’ Party in March 2020. The purpose of the document, entitled “All Citizens Must Fulfill the Demands of Military Service,” is to reinforce the public’s knowledge of the Military Service Act which was enacted by the 10th Standing Committee of the Supreme People's Assembly held in December 2003.

NextPage:  ◆ Military service terms decided and altered at the discretion of the State…

Next Page： ◆ Military service terms decided and altered at the discretion of the State
1 2 3 4
Facebook Twitter はてブ Pocket Feedly
RECOMMENDATIONS
＜Inside N. Korea＞ Sexting Sting: Roadside Cell Phone Inspections Cause Embarrassment as Police Probe Data and Texts
Mobile phone usage has expanded greatly in North Korea, with 5 million...
＜Inside N. Korea＞ Signs of Starvation: Farmers Forced to Survive off of Potatoes as Regime’s Unreasonable Quotas Leave Them with Nothing
There are signs of starvation in rural areas in North Korea. Designate...
The Making of Rimjin-gang 〈03〉
The Making of Rimjin-gang The Making <01> <02> <03>...
＜Inside N.Korea＞ Government Evaluation of 70 Day-Battle Leads to Nervous Officials - Punishment of Poor Achievement and Secret Drinking,
The recent the Worker`s that ended May 9 caused strain and exhaustion ...
＜Inside N. Korea＞ Breaking Point: Armed Standoff as Border Guard Storms into House of Commanding Officer to Air Grievances
◆An incident underlied by the poverty faced by soldiers? On March 8, a...
＜Inside N. Korea＞ Ban on privately operated restaurants
North Korean authorities have suspended the operation of private rest...
◆ “A Taxi Driver” Gains Popularity Among North Korean Youth The Kim Jo...
＜Inside N. Korea＞ Expansion of the market economy as the driving force behind social transformation--based on sources from inside N.Korea. (PART4) Marketization leads to rapid development of the transport system. by ISHIMARU Jiro
2016/Dec/22 3-2 The emergence of a marketized transport system The ma...
＜Photo Report＞ Female Soldiers in Miserable Conditions: Seven Years of Military Service Starting at 17 Years Old.
2017/Jan/24 Parents, whose daughters will graduate from high school, ...
[Video Report] A rare glimpse of ‘No. 10 Checkpoints’ set up by the State Security Department
The reality in North Korea is that citizens are not allowed to move fr...