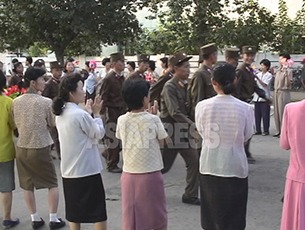 Well-dressed residents attend a grand ceremony to celebrate the enlistment of new recruits. Photographed in August 2006 in Chongjin City by Lee Jun (ASIAPRESS)

● Military service is based upon a high sense of consciousness and integrity.
● To serve faithfully in the military is a noble and wonderful tradition of North Korean youth.
● The heroes of the War for the Liberation of the Fatherland, including Li Su-bok, and the heroes of the 60’s and 90’s such as Kim Kwang-chul and Gil Young-jo, were all faithful soldiers who performed their military duties better than anyone else.
● All young graduates should enlist in the People’s Army and display great loyalty and patriotism to shine in their time serving in the military.
● In particular, recruits must be trained to fight to the death to serve the leader of the revolution, respecting the duty of military service faithfully.