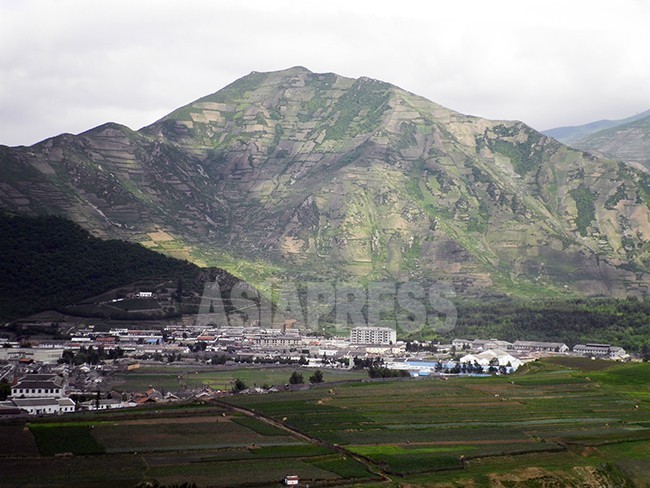 A mountain that has been cleared to the top. There are hardly any trees. Photographed from the Chinese side of the border with Musan county, North Hamkyung Province in May 2010 by Li Jin-su

According to reporting partners in North Hamkyung and Yanggang Province, North Korean authorities are forcing citizens to cremate the buried remains of ancestors and relocate tombs away from mountains and farmland. In an attempt to secure the land and restore forests, the regime has placed the burden of relocating ancestral tombs on residents, causing widespread discontent. (Kang Ji-won / ISHIMARU Jiro)

According to reporting partners, the measure was ordered by the Central Committee of the Labor Party, before being passed to the party committee of each province, and ultimately delivered to residents at inminban (local political unit) meetings. The order was received before cheongmyeongjeol on April 5, the traditional day for tending to tombs. In a move to transition away from burials to cremation, subsequent burials are banned, with bodies to be cremated instead.

The first tombs to be relocated were those around roads and railroads. The first period of relocating ended on April 10, with a second round to be completed by June 10. Graves that have not be relocated are not to be tended to any longer and will soon be disposed of by authorities.

A reporting partner from Yanggang Province complained, “Why are they interfering with the tombs of our ancestors? They told us not to bury our relatives for the next 3 years- many people are anxious that if we move the tombs hastily, 3 generations of graves will be destroyed. Especially the remains of ancestors that have been buried for a long time- how are we supposed to relocate the remains when nothing is left? Residents are awfully worried.”
Next page : Residents complain that “Authorities are ordering cremations to make money”…

1 2
Facebook Twitter はてブ Pocket Feedly
RECOMMENDATIONS
“Hunger Will Kill Us Quicker Than Coronavirus”: 91% Decline in Trade Leaves Vulnerable Locals Facing Starvation
◆ North Korean exports amount to only $610,000 North Korean exports to...
Rimjin-gang English Edition for iPad App
Rimjin-gang (NEWS FROM INSIDE NORTH KOREA) First English Edition Now a...
＜Kim Jong-un's visit to China＞ Behind the scenes of smuggling in North Korea
North Korea and China share two rivers as their border: The Amrok-gang...
＜Inside N. Korea＞ Won Plunges After Regime Attempts to Confiscate Foreign Cash off Merchants and Force Companies to Trade in Local Currency
“The North Korean won is plummeting.” News was first reported on Janua...
Rimjin-gang (NEWS FROM INSIDE NORTH KOREA) First English Edition Now available on iPad App
Rimjin-gang is unique in that it is based solely on the reports and an...
N.Korean Railway Workers Earn Through Bribes and Side-jobs As Monthly Wages Drop Below 20cents
North Korean Railway Workers Earn Through Bribes and Side-jobs As Mont...
Rising discontent as control reinforced to prepare the 7th Workers Party Conference in May… Forced labor to the runaways from their work places and coerced savings to banks…
Declaring nationwide 70 days battle (*1) to prepare the Workers’ Party...
N.Korea : Starving 23 year-old Homeless Woman (Rimjin-gang/ASIAPRESS)
23 year-old Homeless Woman Found Dead (2011/Feb/05) ISHIMARU Jiro (C...
＜N.Korea Crisis＞ Why is there a Food Shortage Crisis in the Breadbasket Region of Hwanghae? (PART1)
Written by LEE Jin-su2012/May/07 Possible reasons other than a simple ...
＜N.Korea＞ N.Korean Military Facing Recruit Shortage Due to Increased Draft Dodgers and Deserters
2017/Jan/20 An ASIAPRESS reporting partner inside North Korea reporte...