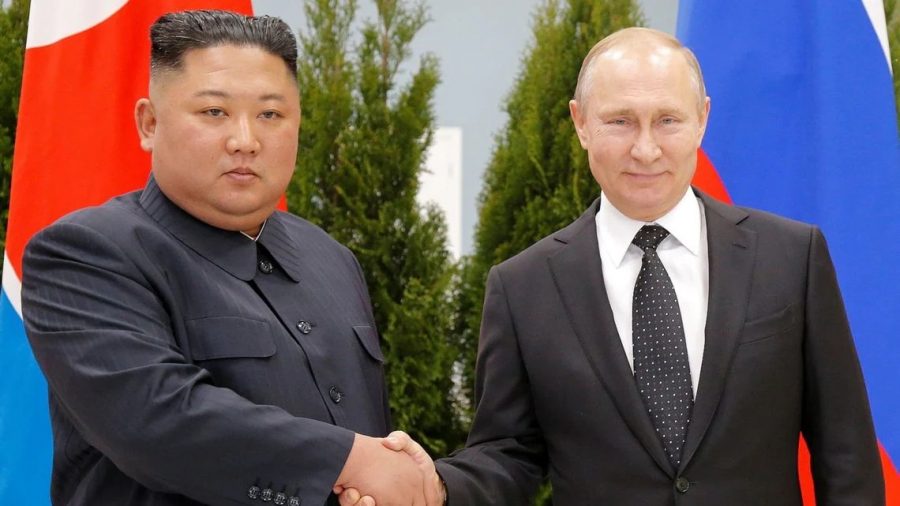 Kim Jong-un has met with Putin once before. He visited Russia’s far eastern city, Vladivostok, by train in April 2019. Photo quoted from Labor Newspaper.

◆"Do you know anything about the situation in Ukraine?" We asked residents directly, but...

While the Russian invasion of Ukraine has shaken the world and forced countries to react, as of March 7, North Korean authorities have not reported a single photo or a single second of footage to the public, and have not given any explanation of the situation to the general public or even to the party or government officials (ISHIMARU Jiro / Kang Ji-won).

ASIAPRESS asked five of our reporting partners in North Pyongan Province, Ryangang Province, and North Hamkyung Province since the beginning of March if they were aware of the Russian invasion of Ukraine and any international tensions that had arisen, but none of them were aware of it.

Next, we asked our reporting partners to try speaking with party and administrative officials directly to find out what their grasp of the situation in Ukraine was.

As a result, we learned that as of the 7th, many cadres were unaware of the outbreak of war in Ukraine and had not been briefed on the situation.

One of the reporting partners (a Labour Party member) who lived in the urban area of North Hamkyung Province who conducted the investigation explained the following.

"Only a few of the cadres knew about it. Most of them thought it was not a war between nations, but an ethnic conflict between the countries that made up the former Soviet Union. One trade organization official, perhaps hearing it from a Chinese trader, said, 'There seems to be a lot of interest in it around the world.'"

◆Why is there silence on the situation in Ukraine?

Let us consider why Putin's war, which is shaking the world, has yet to be conveyed to the people at all.

The most important principle of diplomacy for North Korea is "respect for autonomy." North Korea has always harshly condemned the behaviour of the U.S. and stressed the importance of fighting hegemony and defending independence to its own people, saying that a major power should `not threaten nor advance on an independent country with a military force.

However, Russia, which North Korea supports as a counterweight to the U.S., has now violently overthrown the small nation of Ukraine, trampling upon the "respect for autonomy" that North Korea has always held up as a national policy. This means that the defence of Russia cannot be reconciled with North Korea’s usual condemnation of the U.S..

Although the Kim Jong-un regime's support for Putin will not be shaken in the near future, I suspect that Kim Jong-un will keep a close eye on the war, as well as the evolution of China's position and the situation in Russia, and begin explaining the situation domestically only after he is able to see some progress in the situation.

North Korea was one of the few countries that clearly expressed its support for Russia at the UN General Assembly. On February 28, the regime released a short statement on the issue through a spokesperson for the Foreign Ministry via the Korean Central News Agency.

The following is the full text of the short statement by the spokesperson of the Ministry of Foreign Affairs.

The spokesperson for the Ministry of Foreign Affairs of the Democratic People's Republic of Korea (DPRK) gave the following answer to the question put by KCNA on February 28, as the U.S. piles up sanctions and pressure against Russia with the Ukrainian crisis as a momentum:

As it became known, the situation of Ukraine is now drawing attention of the international society.

The root cause of the Ukraine crisis totally lies in the hegemonic policy of the U.S. and the West which indulge themselves in high-handedness and arbitrariness towards other countries.

The U.S. and the West, in defiance of Russia's reasonable and just demand to provide it with legal guarantee for security, have systematically undermined the security environment of Europe by becoming more blatant in their attempts to deploy attack weapon system while defiantly pursuing NATO's eastward expansion.

The U.S. and the West, having devastated Iraq, Afghanistan and Libya, are mouthing phrases about "respect for sovereignty" and "territorial integrity" over the Ukrainian situation which was detonated by themselves. That does not stand to reason at all.

The greatest danger the world faces now is high-handedness and arbitrariness by the U.S. and its followers that are shaking international peace and stability at the basis.

The reality proves positive once again that peace would never settle on the world at any time as long as there remains the unilateral and double-dealing policy of the U.S. which threatens peace and security of the sovereign state.