The charge for the crackdowns is changed from 'lewd video' to 'South Korean recording materials'.

From August the storm of the crackdowns on so-called 'impure materials' has swept across North Korea within the inerior of the state apparatus.

Beginning in Pyongyang with the firing squad execution of the entertainment group, reports have emerged from a number of different areas in North Korea of similar executions being carried out by mid-level government officials. The original reason given for these actions - the distribution of 'Impure recordings' - has since been completely changed, new claims being issued that these co-called corrupting materials were imported by the South Korean government. Let us examine the claims issued by the North Korean government:

In September, further announcements were issued by the North Korean government stating, "Those who view or illegally contribute to the dissemination of impure materials will be severely punished". 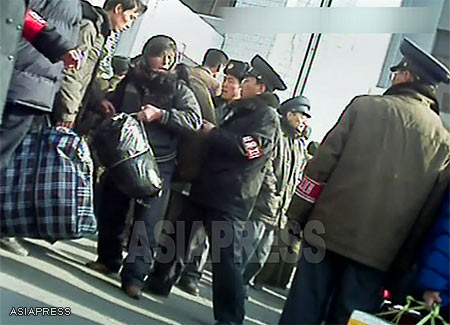 In front of the Sinuiju railway station people carrying large bags into the station are being stopped and searched by the officers of the Public Order Maintenance Corps (질서유지대), on the lookout for illicit materials being distributed within the country. Sinuiju City, North Pyongan Provice. ( November 2012, Taken by Rimjin-gang's reporting partner in North Korea) ASIAPRESS

The Crackdown started with the 'Lewd Video'

"Security officers from Pyongyang have been dispatched to the provinces as part of the clampdown on material smuggled from South Korea, however, the target of these investigations are not normal citizens, rather ranking officials. They have even had their homes searched. The people who watch the most South Korean materials are the ranking officials and until now police were too afraid to touch them. This time, however, they are taking a more hardline."

On August 23rd, our reporting partner living in the Northern province of Ryanggang reported by telephone on the latest events coming out of North Korea, emphasising that this is not the first time that North Korea has taken steps to crackdown on the movement of illicit materials inside its borders. Time and time again, however, progress to control the flow of such 'lewd' material has been impeded. Accordingly, according to the reporter, there is no need to consider these efforts any different from what has been previously attempted.

However, firing squad executions in various provinces within North Korea have been called in by our reporting partners in North Korea and all have as the common denominator a renewed crackdown on 'impure recordings' as a motivator. These reports first started attracting world attention following an article in the South Korean newspaper Chosun Ilbo on August 29th claiming that on the 20th of that same month, "more than a dozen of people including members of North Korea's Milky Way Symphony Orchestra were executed by firing squad for the filming and illegal distribution of a 'lewd video'."

By this time rumours of the 'Entertainer's Execution Incident' had already spread nationwide. On August 30th, Mr B, our reporting partner living in North HamKyung Pronvince, expressed the following on the matter:

- Have you heard anything about the execution of the entertainers?

"I hea rd from a police officer who is my acquaintance that 25 entertainers were executed by firing squad for making 'lewd recordings' and selling them in China." (At a later date, he corrected the number, clarifying that more than a dozen people were executed.)

- Can you explain about the situation in North Hamkyung Province?

"According to the police officers who dealt with the matter [of 'lewd' recorded material], in XX area of Saebyeol County, televisions and video recorders were confiscated from some 40 households. In some homes, entire families who had seen a 'lewd video' named the Day of the Gisaeng (Note: Korean Female Entertainer) were tied up and pulled from their homes, I was told."

- So those in charge of the crackdown were the police?

With the issuance of Kim Jong-un's 'August/17 Policy' (8.17방침) [The numbers proceeding each verbal instruction given by Kim Jong-un is assumed to refer to the date issued] officers from the State Security Department (the secret police) from Bureau 27 in Pyongyang arrived with the purpose of carrying out inspections.

These security officers have been searching both night and day in people's homes and on their USB drives in an effort to apprehend those involved. They claimed that, "Our enemy (South Korea) has smuggled 10,000 USB memory drives into North Korea in an effort to infiltrate our country".

The secret police from Bureau 27 in Pyongyang are specialists in covert intelligence and digital operations. If the case is to crackdown on "obscene materials", it is a moral matter, and the police deals with these issues. But when the secret police appears, it is deemed to be a political issue.

Mr. B also added that rumors are being passed around explaining that the reason Pyongyang's entertainers were targetted was because of the filming and recording of a sex video that was later discovered on a USB memory. The video was leaked to a foreign country, and the enemy (South Korea) deliberately smuggled it back into our country. However, It is unlikely and unnatural that the obscene video made in our country was smuggled in from a foreign country, Mr. B added.

Our reporting partner Mr.B expressed his uncertainty over special 'August/17 Policy'. In north Korea, 'Policy' refers to a direct command from Kim Jong-un. If the 'August/17 Policy' is indeed a ruling from the top if the political chain, it has a supreme political meaning. This makes it a top priority for the security services of the state. If we take this into consideration, it makes me think that this policy is in fact not entirely meant to address the issue of 'lewd videos' in North Korea.

Announcement on the crackdown on 'Impure Propaganda'

As of mid-September, our reporting partners working across North Korea have, almost simultaneously, reported on announcements on the 'Anti-impure Propaganda Crackdown', as information has emerged from official sources.

The following was reported via telephone link by reporter Mr.B:
"For the announcements a meeting of the People's Unit was opened and police officers were called to attend, being told "Those people who have in the past been exposed to malicious things must confess".

ASIAPRESS North Korea reporting team requested a copy of the announcement. Unfortunately, Mr.B does not have a digital camera, however, he noted down all articles related to the announcement and read it for us via telephone using our safe-line.

The announcement is posted in public areas with high volumes of foot traffic such as train stations and public boards in the street.

Strangely, the announcement was publicly released on December 25th 2004, on this point Mr B sheds some light:
" The announcement was originally handed down from the top ten years earlier. It means that this is a warning to the people that they are under threat, according to the local police."

In Ryanggang Province, the announcement also contained similar information to that found in the 2004 document, according to other reporting partners in the area.
So it can be understood that the announcement conveyed by Mr. B is the same as the 2004 version.

While the 2013 announcement was published through the 'National Defence Commission, People's Safety Deaprtment', the 2004 version was promulgated by the 'Ministry of Security'. Since the initial publication it is believed that only the name has changed.

The materials listed in the announcement as 'Impure propaganda materials' include South Korean books, magazines, leaflets and videos. This also includes information stored and disseminated on USB drives. The re-announcement, ten years later, of a crackdown on materials considered harmful to the North Korean state is a deliberate move by Kim Jong-un, designed to personally exert his control over the country.

At the same time in early August, that the crackdown was put into motion, Kim Jong-un regime announced implementation of the 'Lewd video-crackdown'. It is deemed that Kim Jong-un launched a series of crackdowns, the first stage of this trivialized events as implementing control on 'Lewd videos' , and later expanded into a large scale political crackdown.
*** Rimjin-gang

ISHIMARU Jiro
Ishimaru was born in 1962 in Osaka, Japan. He is the Osaka office representative for ASIAPRESS.
He studied abroad in Seoul for two and a half years and then in '93 traversed the entire 1400 kilometer China-North Korean border. He has made reports from inside North Korea three times, and has been to the border region more than eighty times. Up to now he has interviewed more than 850 North Koreans. Ishimaru is the publisher and chief editor of Rimjin-gang.

Facebook Twitter はてブ Pocket Feedly
RECOMMENDATIONS
A glimpse into North Korea’s COVID-19 situation (2) Urban lockdowns are slowly being lifted, and people in areas where lockdowns have ended are being sent to farms
After the North Korean regime acknowledged an outbreak of COVID-19 on ...
Possible Firing Squad Executions Punish Violators of "Kim Jong-un's Instructions"
2014/November/07 Written by ISHIMARU Jiro, Editor in Chief, Rimjin-gan...
＜Inside N. Korea＞ Not So Special: Kim Jong-un’s Unused Tourist Zone in Samjiyon is Falling Apart
More and more issues are plaguing Kim Jong-un’s priority project in R...
＜Interview with N.Koreans＞ "Is it any better in Kim Jong-un Era? Not at all! Preferential treatment is given to the Party officials by sacrificing the needs of the residents in the regions outside of Pyongyang!"
2015/December/13 Edit by KANG Ji-won, defector reporter, Rimjin-gang &...
＜Interview with a N.Korean＞ How do the N.Korea people think about four years of Kim Jong-un’s ruling? Acid evaluation calling him “a kid”
-How do the people outside of Pyongyang evaluate Kim Jong-un’s rule si...
"Jang Song-taek Was Human Scum" - Massive Campaign by the N.Korean Authorities
2013/December/25 Written by PAEK Chang-ryong, a defector reporter.Sinc...