Cover of an internal document designated as an absolute secret. Photo obtained by ASIAPRESS.

Internal Workers' Party documents obtained by ASIAPRESS reveal that in selecting "convoys" (bodyguards) to protect Kim Jong-un and other top-ranking officials, the authorities are conducting a background investigation that goes back as far as their grandparents, sometimes even extending as far as second cousins (ISHIMARU Jiro).

◆What is a guard?

The document we obtained was issued by the Central Party Committee of the Workers' Party, and was entitled "Proposal to Set Up a Successful Identification System for Convoy Candidates" and was issued on September 25, 2021.

The convoy is a military unit responsible for the personal security of Kim Jong-un, his brother Kim Jong-chol, sister Kim Yo-jung, aunt Kim Kyong-hui, and other members of the Kim family, as well as a small number of his closest aides. It is said to belong to Unit 963 of the General Directorate of Protection, but there are no further details available.

The impression of a tall group of guards surrounding Kim Jong-un in a V-shaped line at the North-South Korean summit meeting in Panmunjom in April 2018 is strong, however, there are even entire hospitals, cafeterias, and villas called "special pavilions" exclusively for use by the Kim family and other top officials in Pyongyang and provincial cities. It is convoys that are stationed at these exclusive facilities and put in charge of guarding them. It is believed that there are many security guards placed there. 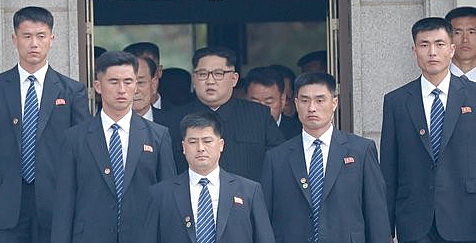 The text begins with the words "foundation identification."

The word "foundation" refers to one's family background in North Korea. The authorities trace back one’s family for generations to confirm the identities of family members and relatives.

"It is extremely important in North Korea to know what your ancestors did and what status they belonged to going back to the Japanese colonial period and the Korean War period."

A former defector, a former member of the Ministry of Security (secret police), who entered South Korea around 2010, describes it. The foundation he describes as good or bad is, for example, as follows.

◆ Check up to the sixth degree of kinship

In the document, the detailed scope and methods of investigation were described for "foundation identification" and "background checks".

Protocol requires that the person’s background and current occupation be investigated up to the sixth degree of kinship for immediate (paternal) and external (maternal) grandparents, and even to the husbands and wives of ancestors.

Furthermore, it states that "At least three persons shall be prepared who can verify the foundation, but if it is difficult, one person must be made to confirm the foundation."

The document calls for finding a living witness, not just a documentary confirmation, yet it is doubtful how many people are still alive after 77 years of liberation from Japanese colonial rule, although it is hoped that at least one person can be found. 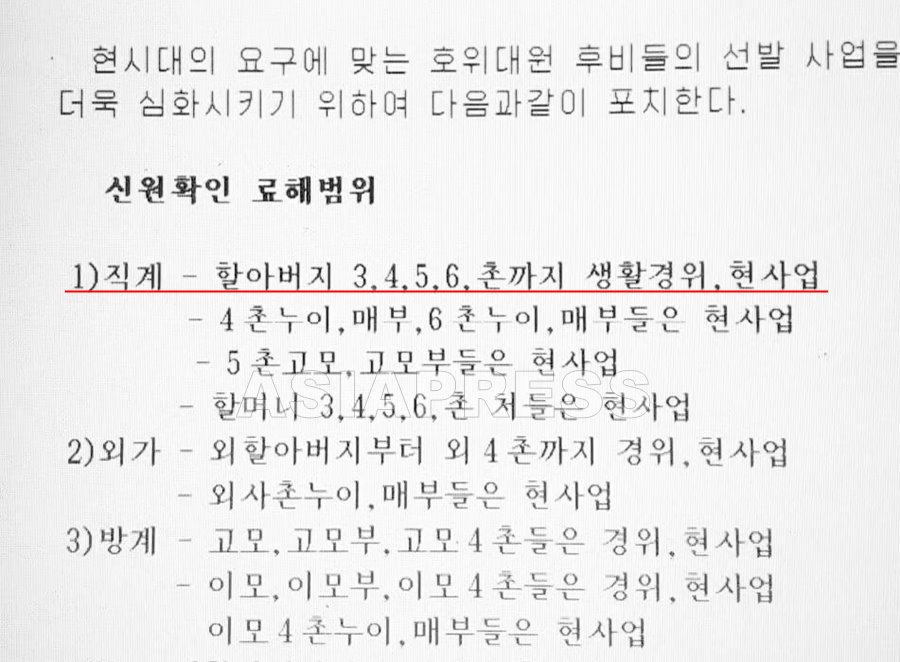 In the document, the scope of the background check includes "the life history and current occupation of the immediate grandfather to the third, fourth, fifth, and sixth-degree of kinship." Photo obtained by ASIAPRESS.

It seems that having a good foundation is not enough. The requirement for a detailed investigation into whether anyone has served an indoctrination (imprisonment) sentence suggests that, even if a candidate comes from a family loyal to the Kim family regime, if the person and his/her ancestors have a history of imprisonment for violating the law, the person will probably be removed from the list of candidates.

Every country would do a background check on its highest-ranking security personnel. However, what country would insist on the backgrounds of grandparents and relatives going back more than 70 years? The "foundation investigation" is a symbol of a North Korean-style status society that is as fixed and fluid as a rock.

The full translation of the internal documents obtained is as follows. 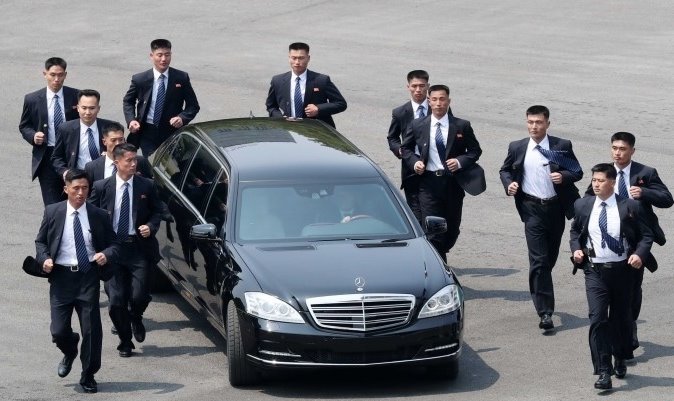 Figures in (), aside from years, are notes by the author.

Absolute Secret.
Draft policy for making the identification of prospective members of the guards fruitful.

Background Verification
At least three confirmers should be provided.
Make sure that the basis for the confirmation is clear, although one or more persons shall be confirmed for each background.
From the scientific and objective background checks principle, do not omit any background information and ensure a 5:5 ratio of finger stamps and seals.

To further deepen the selection project of prospective guard members to meet the demands of the current era, the following arrangements have been made.

Scope of Identification Verification
1. Direct line (meaning paternal side) - life history and current position of grandfather up to the 3rd, 4th, 5th, and 6th degree
- 4th-degree cousins and cousins' husbands, 6th-degree relatives and their husbands' current jobs
- Current occupation of aunts and uncles in the 5th degree and their husbands
-Current status of grandmother's 3rd, 4th, 5th, and 6th-degree relatives and their wives

Regarding the current position investigation