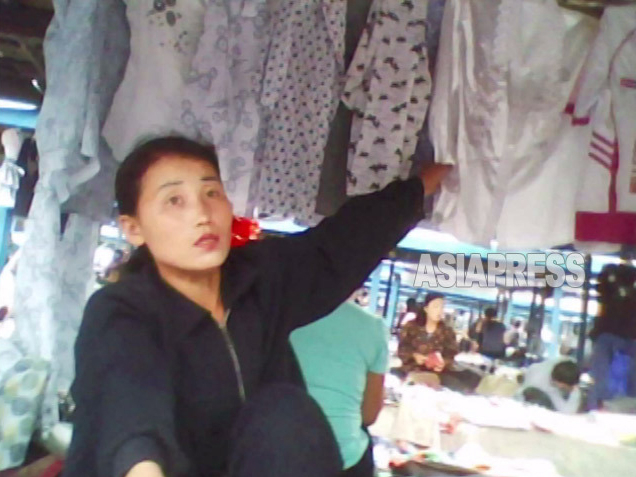 ◆ “If the blockade continues, there will be panic”

In a bid to prevent the novel coronavirus from spreading through China and into North Korea, authorities last week sealed off the border with China, blocking the flow of people and goods. The impact of this move is already being felt across the country, with the subsequent rise in market prices has led to a growing sense of anxiety among residents. (Kang Ji-won/ISHIMARU Jiro)

The first signs of the blockade’s effect became evident on January 31.

A reporting partner living in northern Ryanggang Province reported, “The prices of Chinese-made goods have began to rise. The price of tangerines rose from 4 to 6 RMB per kilogram. The cost of 5 kilograms of cooking oil rose from 37 to 40 yuan. The prices of car parts, herbal medicine, shoes, and miscellaneous goods also rose by 5-10%. There is a growing concern that the blockade at the Chinese border will be prolonged and that goods will not come through.”

In North Korea’s central and northern regions, the RMB has become the primary currency, with the prices of goods and services even listed in RMB. As of February 2, the exchange rate value of 1 RMB was 1,250 North Korean won (roughly 172 South Korean won).

Rumors have been spreading that the markets may be shut down in order to prevent infection, subsequently causing a panic amongst ordinary people who rely upon small, private business to make ends meet. As of February 2, the markets were not closed down, though the sale of live animals such as poultry and rabbits had apparently been banned.
Next page :Prices continue to rise...

Next Page： ◆ Prices continue to rise
1 2
Facebook Twitter はてブ Pocket Feedly
RECOMMENDATIONS
Residents of N. Korea's Embattled Cities Face Starvation Amid Continuing Coronavirus Blockade
One of the characteristic works of French painter Millet is a painting...
Compulsory Collection of Harvest for Military Supply - Farmers' Discontent Growing
2014/January/29 Written by PAEK Chang-ryong . a defector reporter. &lt...
＜Inside N. Korea＞ Markets in Turmoil Across the Country: Households Register to Receive Chinese Aid and Trade Grinds to Halt as Food Prices Hit Yearly High
Turmoil is spreading in markets across North Korea. The prices of sta...
＜Inside N. Korea＞ “No Soap but Many Broken-Down Cars”: The Reality of Life Under the Paralyzed COVID-19 Economy
◆Chinese Products have disappeared from the market In North Korea, it’...
＜Inside North Korea＞ A 23 year-old homeless woman found dead
2011/February/05 ISHIMARU Jiro (Chief Editor) 23 year-old Homeless W...
N.Korean Drug Trade Spreads to Ordinary Citizens (PART1)
2015/Jan/12 Written by PAEK Chang-ryong, a defector reporterThe rapid ...
＜Inside N. Korea＞ Market survey shows “Resolution 2270”, the toughest-ever sanctions, didn’t work.
2016/Dec/6 For the last seven months, the ASIAPRESS reporting team ha...
＜Latest Report on N.Korea＞Another year of emaciated soldiers in N.Korea; Young Soldiers suffering with Malnutrition (Four Photos)
In late July, a reporter for ASIAPRESS was on a cruise ship on the Ya...
＜Inside N. Korea＞ Candle in the Wind: Burner Phones Bring Freedom of Communication But Now Face Crackdown
Many people in North Korea use burner phones, bought under the names o...
Young Defectors Escapes to Japan to Be with Her Mother, 62 Years After the Start of the Repatriation Project to North Korea
On December 14, 62 years ago, the first ship of the "Repatriation Pro...