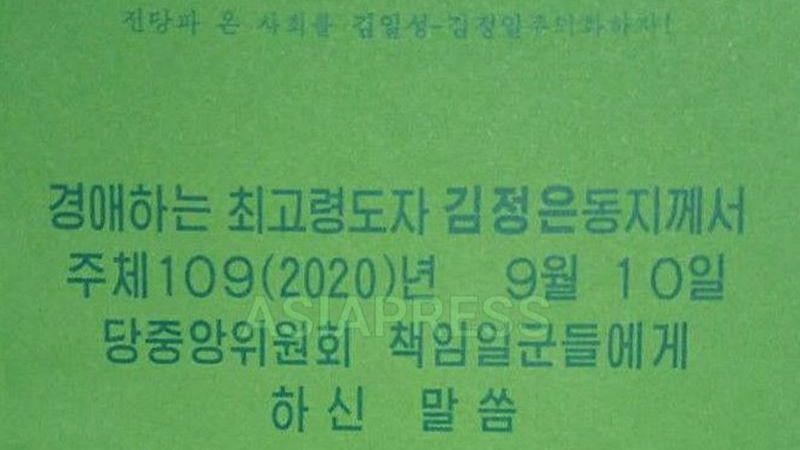 On December 4, North Korea adopted the “Law on the Elimination of Reactionary Thought and Culture”. Although the text of the law has not been made public, there is no doubt that the target is “Hallyu”- the South Korean cultural wave.

Previously, Kim Jong-un set up a new organization to enforce control of the “Korean Wave” and was pushing strongly for more than a year for the adoption of the new law. Recently, ASIAPRESS obtained several secret documents prepared by the Workers' Party and investigated the actual measures of control enforced within the country. This article is the first in a series of reports on Kim Jong-un’s new policy of inciting “Anti-South Korean sentiment.”

◆What were Kim Jong-un’s top-secret remarks?

The first of the documents obtained by ASIAPRESS is entitled “Remarks from the Honourable Supreme Leader Kim Jong-un to Laborers at the Party Central Committee on September 10, 2020.” The 3-page long document was designated as “top-secret.”

The document lists institutions and positions for its limited distribution and was created to pass on Kim Jong-un's instructional remarks at the Workers' Party Central Committee to senior party and administrative officials across the country.

Based on these "words of encouragement," each organization will prepare a separate document that defines its enforcement policy and the content of its political thought education program for its members. This will be discussed in more detail later.

The full text of Kim Jong-un's “remarks” is as follows:
“We must strongly eradicate the [South Korean] ‘puppet words’ and ‘puppet style’ in our society.

In the past, I have repeatedly warned against the phenomenon of young men and women who are not blood relatives using the ‘puppet’s language’ such as ‘oppa’ (older brother) and ‘dong-saeng’ (younger sister, brother) to refer to each other.” However, this phenomenon has not yet disappeared among some young people.

This is a typical example of the perverted ‘puppet language’ and ‘puppet style’ that is widespread in our society.
The phenomenon of using ‘puppet words’ has appeared among some artists as well. Among the younger generation, they may refer to each other that way, but we have to better educate them so that such a phenomenon will never occur among the Youth Alliance and other young members of our country.” 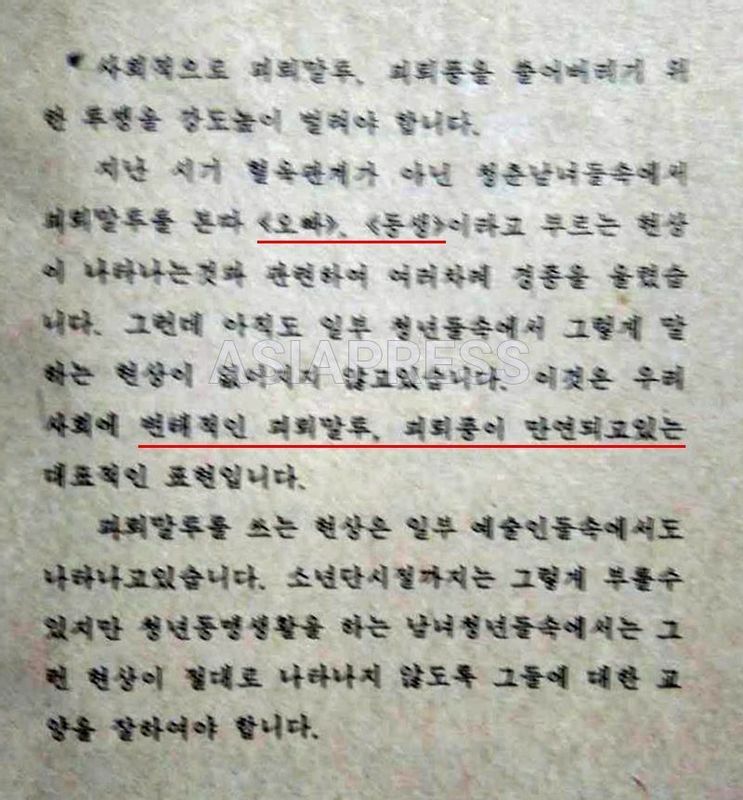 The text of the document is designated top-secret. The upper line shows the words "oppa" and "dong-saeng" and the lower line shows Kim Jong-un’s statement regarding the “spreading of perverted puppet words and puppet style.” Photographed by ASIAPRESS.

Needless to say, the “puppet” that Kim Jong-un refers to is South Korea. The implication is that South Korea is a puppet of the United States. In South Korea, the terms "oppa" and "dong-saeng" are commonly used between people who are close to each other. Kim Jong-un directly criticized this custom and has ordered what could be coined a "word hunt.” This shows the extent to which the “Korean Wave” has penetrated North Korean society.
NextPage: ◆South Korean-style text greetings such as...

Next Page： ◆South Korean-style text greetings such as “bye-bye,” “chal-ka,” and “ty” are popular among North Koreans
1 2
Facebook Twitter はてブ Pocket Feedly
RECOMMENDATIONS
＜Inside N. Korea＞ Order to Abolish All "Hidden Fields": Farmers Fear Starvation as Ban Begins
The North Korean authorities have ordered the abolition of all privat...
＜Kim-Trump Summit＞Left in the Dark: With No End to Sanctions in Sight, Citizens Face a Long Wait for Electricity
◆Left with little choice, citizens learn to steal electricity from the...
Profiles - ASIAPRESS N.Korea Reporting Team
Ishimaru Jiro Ishimaru was born in 1962 in Osaka, Japan. He is the Osa...
N.Korea Food Shortage: Not a matter of absolute shortage, a matter of distribution and access -1
Not a matter of absolute shortage, a matter of distribution and access...
＜Inside N.Korea＞ Celebrating Mood in Pyongyang Is Propaganda, High Alert Is Reality
2017/Apr/14 Many foreign media, including Japanese newspapers and bro...
＜Inside N. Korea＞ 22-Year-Old Man Jumps to his Death Following Arrest For Watching Foreign Film, Leading Bereaved Family to Rise in Protest
◆ Conducting house-to-house investigations without a warrant In North ...