Military tensions between the two Koreas are once again easing since August 25, when the North officially expressed regret over the explosion of a mine in the Demilitarized Zone. In an interesting twist, however, the North Korean government is claiming it was South Korea that issued the apology.

Rimjin-gang's North Korean reporting partner who lives in the country's Northern region, told us the following in relation to the North-South talks:

"In the People's Unit and the workplaces, the authorities announced that the military provocation was initially caused by the U.S and South Korea. They say that these provocations have now been quelled and the threat of war neutralized as they have apologized for their mistakes. "
(NOTE: People's Unit(인민반); The lowest local administration unit composed of neighborhoods)

This reporting partner added:
"Following the all-clear announcement and the return to a pre-wartime state on August 26, the government halted the civil defense force 'Red Guard'(적위대) drills, mobilized in response to the emergency. But the 'Instruction Troop' and military soldiers remained on alert for a further week."

(NOTE: The Instruction Corps(교도대) ;This is the largest civil force. It has nearly the equivalent level of ordinary army infantry equipment and combatants. It is the North Korean equivalent of the reserve army). 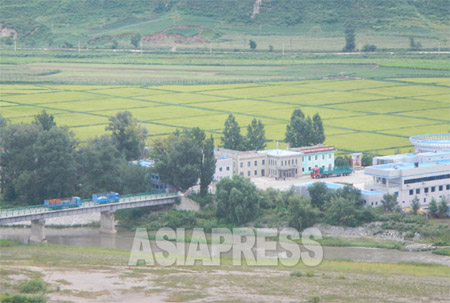 Hoeryong city in North Korea's Northern border town near China. This picture was taken a few days after the DMZ explosion. Despite the ramping up of tensions in the southern areas, there seemed to be few changes around the Chinese border zones. (Photo taken from Chinese side.) ISHIMARU Jiro (August 2015). ASIAPRESS

Replying to Rimjin-gang's editing team's question over how the official state TV reported on the North and South talks, our North Korean reporting partner commented:

"How can I watch the TV when we don't have any electricity? We only have an electricity supply on national holidays. Even on these occasions the voltage is so poor that we can't always get a clear picture." 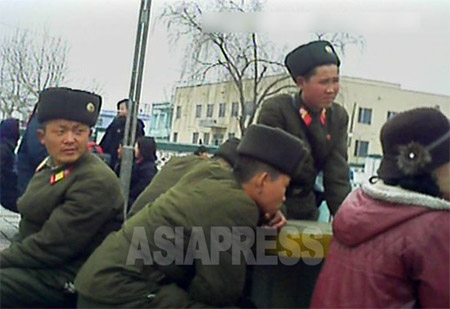 Unlike in 2013, when the Kim Jong-un administration declared a state of war against its southern neighbors, inside North Korea there has been relative calm as talks between the two Koreas took place and eventually reached resolution. This picture was taken in Pyongsong city/South Pyongan Province, northeast of Pyongyang in March, 2013.(PHOTO: Team Mindeulle) ASIAPRESS