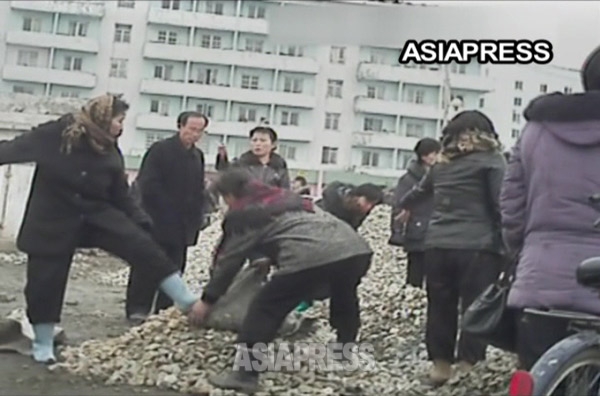 North Koreans mobilized to collect gravel to build a greenhouse on a square near apartments. Photograph taken in March 2013 in Pyongsong, South Pyongan Province, by ASIAPRESS.

Starting this year, North Korean authorities have increased the roles and duties of inminban (people’s units). As the authority held by inminban leaders has risen, people are afraid, calling the leaders “scarier than the police.” The reason for this change is the Kim Jong-un regime’s strengthening of its control over the people under the pretext of preventing the spread of COVID-19. (Kang Ji-won)

Inminban are the lowest administrative units in North Korea. They typically manage 20-30 households in a particular area. Inminban leaders relay orders from local district offices to residents and are also in charge of keeping a close eye on the (ideological) tendencies shown by ordinary people. Local district offices have long appointed housewives with “irreproachable conduct”as inminban leaders.

Inminban leaders are tasked with understanding what is going on in each household and managing issues as they come up. Specifically, this means the leaders confirm where members of households are living, what their jobs are, how much they earn, and whether they allow people from other places to sleep in their homes. The next most important task inminban leaders have is to relay the policies of the government and hand down instructions where necessary.

Inminban leaders are also involved in mobilizing people for labor projects handed down by the district offices and ordering households to deliver various goods – called “non-tax burdens” in North Korea – to provide food to the military and materials for construction projects. In short, inminban leaders live among the people to do the bidding of the Kim Jong-un regime. 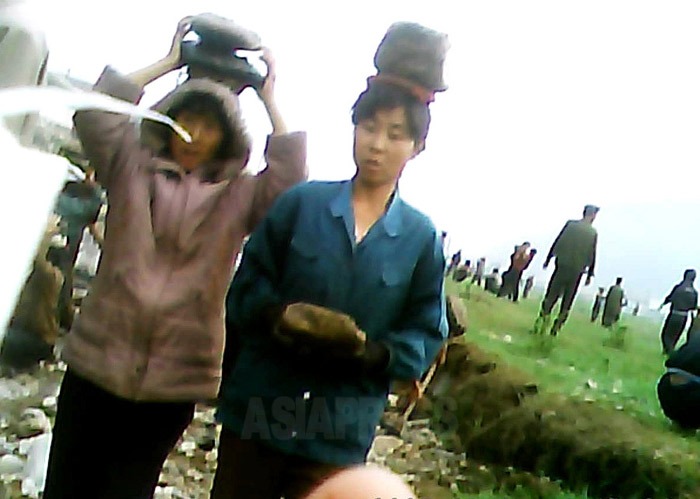 Women mobilized to move rocks to cleanup a river. Photograph taken in June 2013 in the northern part of the country by ASIAPRESS.

Inminban leaders themselves also need to make a living, which means many are involved in commercial and agricultural activities. North Korean authorities continue to expand the household management role played by the inminban leaders on a yearly basis, which has led to increasing benefits for these officials. An ASIAPRESS reporting partner living in the northern part of the country recently reported:

Following the outbreak of the COVID-19 pandemic, the Kim Jong-un regime has placed a priority on preventing the virus from entering the country and establishing a system of disease-prevention controls throughout the society. Moreover, the regime has taken efforts to prevent the collapse of social order due to the worsening economic situation by exerting controls over people’s behavior. The regime has strengthened the authority held by inminban leaders, who live among the people and manage their daily lives in a direct way.

Next Page： ◆ Scarier than the police...Everyone has to stay on the good side of their local inminban leader
1 2
Facebook Twitter はてブ Pocket Feedly
RECOMMENDATIONS
Peddlers Carrying the Future of N.Korea on Their Backs
The Daily Life of North Koreans: Peddlers Carrying the Future of North...
＜Inside N. Korea＞ Put On Ice: New Year Performances in Samjiyon Scrapped after Power Cuts Turn Apartments into “Freezers”
The New Year’s Day art performances, which were being prepared extensi...
[Video Report] North Koreans Forced To Provide Labor
Citizen mobilization in North Korea doesn’t only mean mobilization in ...
＜Inside N. Korea＞Recent farming situation (1) Farm mobilizations begin in earnest…The authorities work hard to prevent stealing of harvested crops
With the start of the fall harvest in North Korea, the authorities are...
[Video Report] Nominal Farm Mobilization: People Feel Squeezed
◎ASIAPRESS rimjingang YOUTUBE playlist North Korea has a system to mob...
＜Inside N. Korea＞Discharged But Disgruntled: Former Soldiers Wreak Havoc After Being Sent to Cooperative Farms
This spring, soldiers who were discharged from the People's Army and ...