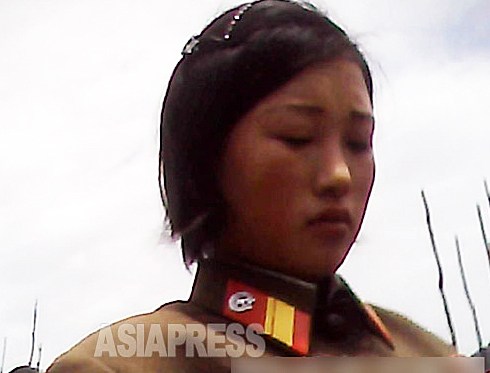 A female soldier wanders around a local market. Although she is not malnourished, her face has a gloomy expression. We do not know how many years she has served in the military, although according to her badge she is a petty officer. She is also wearing a barrette. June 2013, in Ryanggang Province. Taken by Team “Mindeulle” (ASIAPRESS)

Parents, whose daughters will graduate from high school, are constantly worried about mandatory conscription.  A large number of girls have to start military service in April each year.

For the past five to six years, the Korean People’s Army has suffered from a shortage of male soldiers.  Because of the famine and the social chaos that ensued in the mid-1990s recruitment has become scarce since during that period, a massive number of children and toddlers had starved to death.  Those who managed to survive have extremely skinny and atrophied bodies caused by malnutrition. The inability of couples to become parents because of the impossibility to raise children under such conditions accelerated the declining birth rates. Simply put, there just isn’t enough young able bodied men.

At present, the “generation of famine” has occupied the majority of soldiers in the army.  The lack of male soldiers has been supplemented by extending the period of the military service by a year (in 2014 the extension was from 10 years to 11 years) as well as recruiting more female soldiers.  Around a third of the country’s girls in high school are forced to enter the military once they turn 17.  In the same 2014 extension women’s service extended from 6 years to 7 years.  Conditions in the military for women are often miserable, where female soldiers have at times experienced missed periods due to a lack of basic nutrition. 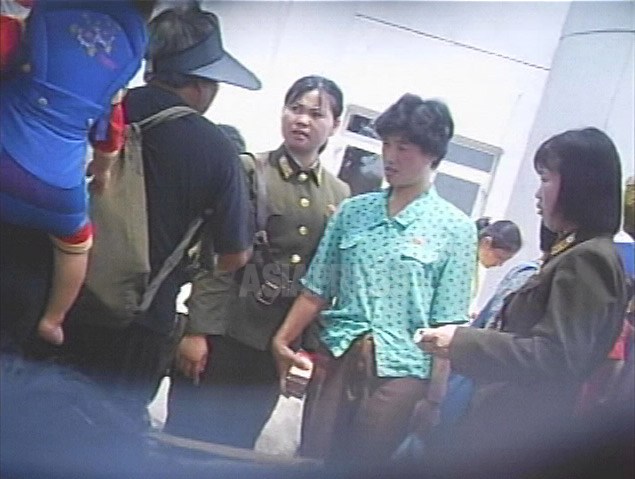 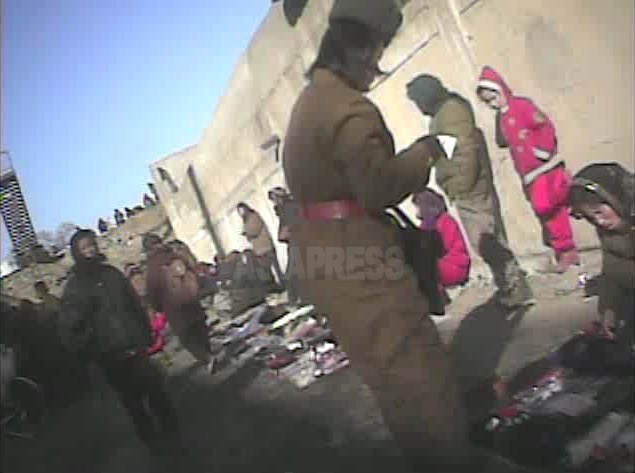 A female soldier at a hawker stall in Pyongyang. Her clothes are stuffed with cotton to deal with the severe cold of the winter. December 2008, in Sadong-guyok, Mirim-dong. Taken by Lee Song-hui (ASIAPRESS) 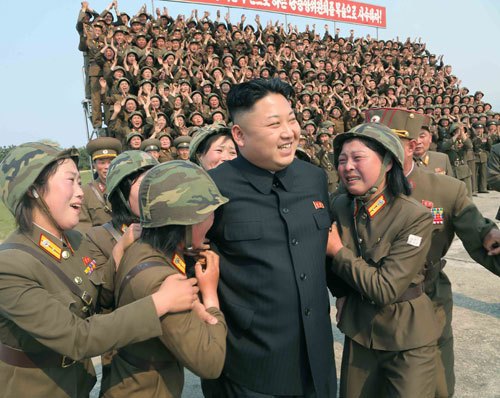 Female soldiers passionately welcome Kim Jong-un's visit to the troops. Apparently, they were all moved to tears. He prefers to release these kinds of pictures, surrounded by female soldiers. Quoted from the Korean Central News Agency on April 24, 2014.

Facebook Twitter はてブ Pocket Feedly
RECOMMENDATIONS
Highly Favored, But Hard to Procure, Pork a Rare Treat in N.Korea
2014/May/06 Written by PAEK Chang-ryong, a defector reporter North Kor...
＜Inside N.Korea＞ Why are North Korean Squid Boats Washing up on Japanese Shores?(3 Photos)
2017/Dec/28 Wooden fishing vessels, most likely from North Korea, are ...
Student Smugglers: High-Schoolers Sneak into China to Smuggle and Steal for their Families’ Futures
With the Chinese border remaining sealed to block the spread of corona...
Pressure Point: China Stifles Smuggling as North Korean Exports Tumble
According to trade figures released by China’s customs authorities in...
＜Latest Report on N.Korea＞People Trapped Behind Barbed Wire (4 Photos)
In late July ASIAPRESS reporter recently visited the Yalu River on th...
＜Inside N. Korea＞ Month-Long Lockdown Begins for Third Time in Hyesan as Residents Fear Further Hardship and Starvation
It has now been confirmed that the city of Hyesan in North Korea's Rya...
＜Inside N. Korea＞Authorities Concerned as Starving Soldiers Brazenly Attack Farms and Homes to Steal Food
In North Korea, the harvest of corn, which is the country's staple fo...
＜Inside N. Korea＞ Student absenteeism on the rise due to excessive requisition from school; a third of students are absent from school in local cities.
2016/Dec/19 Recently the number of student absenteeism has grown in l...
＜Photo Report＞ Abandoned Elderly (PART4) Collapsed Social Welfare System Has Left the Elderly on the Streets.
2016/Oct/11 Pyongyang has been the only area in North Korea where peo...
＜Inside N. Korea＞ Drug Trade: Addicts and Traffickers Turn to Opium as Methamphetamine Prices Skyrocket Due to Border Blockade
The price of methamphetamine trafficking has skyrocketed in North Kore...