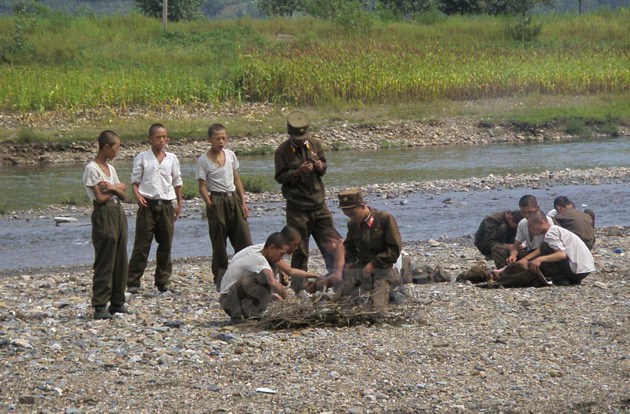 Soldiers broiling corn that they stole from a nearby field. They are all skinny. September 2008. Taken by Chang Jeong-gil (ASIAPRESS)

An ASIAPRESS reporting partner inside North Korea reported that a number of draft evasion–malingering–and desertion have taken place, causing recruit shortage in the North Korean People's Army.  Based on an interview with an officer concerned, the state authority is taking strong measures against it.

In the Mid-January, the reporting partner in a Northern part of North Korea met an officer of the “Military Service and Mobilization Division.”  It is lead by a formation instructor who belongs to Ministry of People's Armed Forces.  Since the division is in charge of recruitment, the reporting partner asked about the supplementary recruitment of soldiers.
Related article: ＜Photo Report on N.Korea＞ Starving People’s Army: Mother Concerns Conscripted Son

He reported that “According to an officer of the Military Service and Mobilization Division, the number of new recruits is only around 86% in proportion to the number of discharged soldiers.  Since the military is facing recruit shortage, the state authority has ordered to conscript every potential recruit–except people with a serious physical problem.  Therefore, the division has already started to go to each school to carry out medical checks for the next recruitment in the coming spring.  It is because parents often scheme to prevent their children from getting drafted–such as faking sickness–when the recruitment season approaches.  This time, the Military Service and Mobilization Division has intended to conduct medical checks before the evasion occurs.”

What is the fundamental reason for the shortage of soldiers in the North Korean People's Army?  In fact, the social chaos and famine in the mid-1990s have given birth to the phenomenon.  A huge number of children including toddlers starved to death during the period.  Those who managed to survive have extremely smaller body due to malnutrition.  Moreover, declining birth rate was accelerated since more and more people could not afford to raise children.  At present, the “generation of famine” has occupied a considerable number of soldiers in the army.  This is the biggest cause of the lack of soldiers.  The shortage has inevitably throttled the conventional troop organization and formation.
Related article: Soldier’s Hard Life 5. Poorly Nourished Young Soldiers: Soldiers’ hunger started from 80’s.

From 2013, reportedly, the Kim Jong-un regime has lowered down the minimum standard of height from 145 cm to 142 cm for men.  In 2014, the period of the military service was extended by a year: 11 years for men and seven years for women.  They are the attempts to solve the recruit shortage.

[Note: A source said that the period of the military service was changed again at the end of 2016 although the information has not been confirmed yet.]

Next page:  Other problems