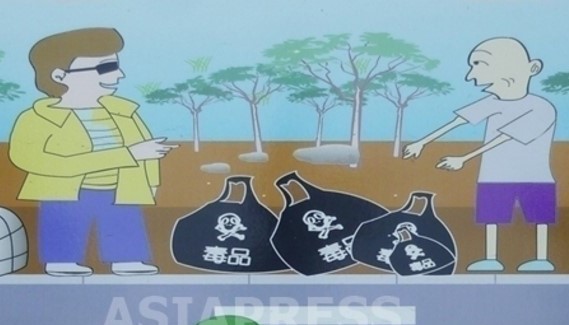 (Photo) Methamphetamine smuggling from North Korea is a threat to China. The photo shows a "No Smuggling and Drug Trafficking" sign erected by public security authorities along the border, photographed by ISHIMARU Jiro in July 2017.

The price of methamphetamine trafficking has skyrocketed in North Korea, and the number of people caught for taking or black-marketing the drug has plummeted. It is said that the reason is the coronavirus (Kang Ji-won).

"The price of methamphetamine was 100-150 RMB per gram a year ago, but now you can't buy it even if you pay 1,000 yuan. There is no product. Ever since the Chinese border was closed to prevent coronavirus spread, raw materials and reagents have failed to enter the country, making trafficking impossible. Thanks to this, women whose husbands are addicts are very relieved."

Our reporting partner in North Hamkyung Province informed us of this on December 22.
(※1 RMB is about 0.13 USD)

◆ People are "Switching" from Methamphetamine to Opium

North Korean society is highly contaminated with methamphetamine. Since around 2000, technicians at pharmaceutical factories have been involved in producing the drug, which has been trafficked and spread throughout the country with the claim that 'it is effective in relieving fatigue.' Many people would take the drug casually as if they were smoking a cigarette. A shocking report of a survey of North Korean defectors that has been published in South Korea, states that 10 to 20 per cent of the adult population has used methamphetamine before.

Instead of methamphetamine, which has been depleted, opium is gaining popularity with traffickers and addicts.

In North Korea, opium has long been used as a medicine. It was often grown in gardens and manufactured for medical use. As a result, society has been lenient in its attitude toward the use of opium, and the punishment for its use has been loose.

General medicines have also been depleted since the COVID-19 pandemic due to a sharp decrease in imports from China. As such, traffickers are distributing opium as a therapeutic alternative to imported medicine. Still, since new addicts are getting hooked and even fatal accidents have occurred, the security bureau (police) is shifting its focus to opium rather than stimulants.

◆ The fatal accident caused by opium

"Opium is sold at 20,000 won per gram (about 4.16 USD). In mid-December, a man addicted to methamphetamine died after taking the wrong amount of opium in Musan County. There was also a case where a parent gave opium to their 12-year-old daughter who had a cold, and she did not regain consciousness for three days," said our reporting partner.

The North Korean economy has been hit hard by the drastic decline in trade with China, but, on the bright side, the previously wide-spread methamphetamine trade is disappearing.