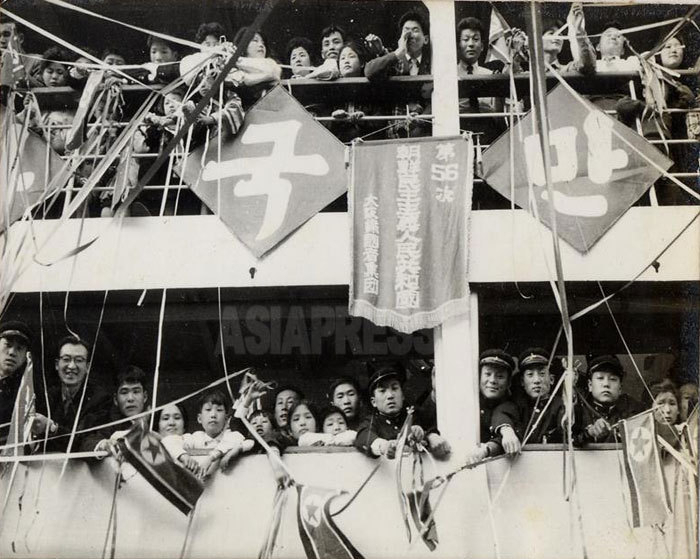 Zainichi Koreans boarding the ship for returnees in Nigata. Young children, middle school, and high school students make up the crowd. What kind of life was in store for those passengers in North Korea? Picture taken in 1961 and provided by the late Yang Young-hoo.

On December 14, 62 years ago, the first ship of the "Repatriation Project to North Korea" for Koreans living in Japan departed Niigata port for Chongjin, North Korea with 975 people on board.

The project continued for the next 25 years, with a total of 93,340 Koreans in Japan and their Japanese family members moving to North Korea (about 6,800 of them were of Japanese nationality). It unknown what kind of life awaited all of the people brought to North Korea. Indeed, many were never heard from again, with nobody sure of their whereabouts.(ISHIMARU Jiro)

◆A Young Woman's Surprising Defection from North Korea to Japan

Last December, Ms Yang Hee (pseudonym), a defector from North Korea who was only about 20 years old, entered Japan.

She crossed the border into China from her village in northern region of North Korea and got to Japan just before the coronavirus spread and invaded countries worldwide. She was arrested by public security and detained for almost a year before entering Japan. As far as I can tell, this is the first time a North Korean defector has entered Japan since a man in his early 20’s (Jin-soo, pseudonym) entered Japan at the end of 2017.

At the time when they had lost contact with their mothers and were about to give up, both Jin-soo and Yang Hee decided to flee North Korea on their own. They had no contact with each other, lived in different places, and had no money on hand. Even so, they left their homes for Japan, crossing mountains and rivers to reach the border with China before crossing over. It was as if their mothers were summoning them to Japan.

The sudden news of Yan Hee’s successful defection from China was greeted with joy by both her mother and those related to the escape effort, a member of which said, "It's a miracle, it's a great accomplishment." The reason for this was that vigilance in North Korea was getting stricter with every year, and the Japanese and South Korean organizations providing support had believed that it would no longer be possible to escape from North Korea.

The number of North Korean defectors entering South Korea has dropped from a peak of 2,803 in 2008 to less than one-tenth of that number in the past few years. Many of the recent defections included people who were in hiding in China for a long time after leaving North Korea.

Brokers who have been aiding and abetting defectors have been arrested one after another and given severe sentences. As a result, the market price for the defection business has also skyrocketed, and by 2019 it was said to cost 2-3 million yen (17-26 million USD) per person to travel from North Korea to South Korea via China.

In addition, the COVID-19 pandemic blanketed East Asia last year. It is expected that fewer than 100 people will enter South Korea this year. The Kim Jong-un regime has tightened controls on movement within the country due to the coronavirus quarantine, making it difficult to reach the border with China. It is fortunate that Yan Hee left North Korea right before the pandemic.

Both defectors had been separated from their mothers since they were less than ten years old, and their memories of them were hazy. "I just wanted to see my mother again," Jin-soo said of his motivation for defecting from North Korea, but he must have also made up his mind to make a better life for himself.

◆ The Japanese Government and Society's Acceptance of North Korean Defectors

Ninety-five percent of those who have defected have settled in South Korea. The total number of defectors is about 34,000. More than 200 have chosen to go to Japan, and most of them live in Osaka and the Tokyo metropolitan area. All of the defectors who have resettled in Japan are children and grandchildren born in North Korea to people who left Japan through the repatriation project.

In this way, the Japanese government has accepted North Korean defectors with ties to Japan, regardless of whether or not they have Japanese nationality. Looking at the project that began 62 years ago, Yan Hee is part of the third generation of returnees from Japan, and Jin-soo is among the second generation.

◆ Hiding the fact that they came from North Korea

Most of the returnees from North Korea living in Japan hide the fact that they came from North Korea. There are two reasons for this. First, they are afraid that their family and acquaintances who remain in North Korea will become implicated or punished.

The second reason is that they are worried that they will be disadvantaged if people know that they come from North Korea. North Korea has a bad reputation in Japan, and they are afraid of being seen as suspicious. I have met about 80 North Korean returnees so far, and many of them pretended to have come from South Korea for fear of being discriminated against in such areas as employment, dating, and marriage.

When Ri Hana, who lives in Osaka, told a new acquaintance that she was a defector, she was shocked when she was told, "I heard that people in North Korea starve and eat grass."

"It hurt me that people looked at me with such curiosity as if I were a rare animal in a zoo."

There are about 400 members of the Japanese returnee population who have escaped from North Korea and are now living in South Korea.

Yan Hee now lives with her mother in Osaka and is attending school. Jin-soo is working in the Tokyo metropolitan area while attending school too. His Japanese is almost perfect.

These two young people have succeeded in escaping from the North, risking their lives. I can only hope that they may now decide their own future paths and live peaceful lives.

＜Related Article＞
Facebook Twitter はてブ Pocket Feedly
RECOMMENDATIONS
Kim Jong-un has started to make nuclear threats. Did he learn this from Putin’s strategy of escalation? What he’s protecting as his people starve...(ISHIMARU Jiro)
Putin is a frightening dictator. Over the past 60 days, the world has...
＜Latest Photo Report＞ Scenes of North Korea Captured by Super Telephoto Lens (2) People Trapped in a "Cage” of Their Own Construction [ISHIMARU Jiro]
North Korea continues to stubbornly maintain its “national isolation”...
Discontent Over Special Rations and Criticism Towards Wasted Expenditures on the Launch
2012/May/04 Written by ISHIMARU Jiro, Editor in Chief, Rimjin-gangDesp...
＜Inside N. Korea＞ ‘Made in Kaesong’ is North Korea’s hottest brand ... unauthorized operations continue at the Kaesong Industrial Complex
In February 2016, it was revealed that factories within the Kaesong In...
＜Inside N. Korea＞ Hopelessly High: Regime Combats Rising Drug Abuse as Citizens Seek Escape From Reality
◆ Are even elementary school students engaging in drugs? A ‘public den...
Possible Further Executions Related to Jang Song-taek Carried Out
Three persons - including the husband of Jang's niece, and two actress...