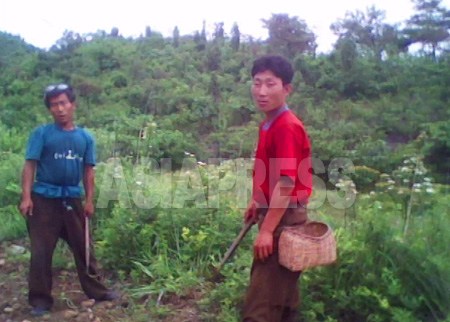 There seems no prospect for the betterment of farmers struggling to make ends meet in North Korea. The photo (below/above?) shows farmers working in a cornfield. They told us that they were sowing beans and corn. Taken by Kim Dong-cheol (ASIAPRESS) in South Pyongan Province, June 2010.

Reporting partner, ‘A,’ living close to Hoeryong City in North Hamkyung Province, reported as follows: “In July, a couple and their daughter died after eating grass porridge as a substitute for actual food at xx collective farm in Hoeryong. It is not known whether they committed suicide or were poisoned by the porridge. The corpses were found when the family didn’t show up for work at the farm. The farm itself is covered with weeds because people are too weak to work.”

Another reporting partner, ‘B,’ reported from North Hamkyung Province, in late July, on the deteriorating situation: “A woman in her 50s was found dead in her home. She lived alone as her son was conscripted into the military and her daughter lived with her husband. Locals said that since June she had been living on corn borrowed from the head of the residents’ cell. Investigators found no food in her home except corn rice. The cell leader who lent her rice is also under investigation. Villagers explained that the woman hadn’t been into work for several days and they suspected she had died of starvation.”

As the food shortage worsens in rural areas, parasitic practices are becoming more common. For example, loaning out vital foods on the proviso that these will be repaid with interest in the autumn.

Reporting partner ‘B’ described the details of the loan sharking: “People borrow 1kg of corn on the promise of returning 1kg of rice. But it doesn’t work because the shortage of staple foods is so serious. Businesspeople in the open market purchase corn by the ton and lend it to small groups or work cells in collective farms on the condition that, come the harvest, they will get their investment back in rice. Usually farm officials are involved in these schemes, receiving bribes of 250 kg of rice per ton of corn. Farm members are easily trapped into debt as government officials conspire with the businesspeople to exploit desperate rural workers.

Why are farmers going hungry? It is because of exploitation.

The North Korean government introduced a system of small group management in 2013. It allowed farmers the right to personally make use of crop production excesses. However, as the cost for vital farming materials such as fertilizer and everyday necessities like clothes and soap rises, farmers are forced to sell their extra crops at the market. Consequently, by autumn, they have run out of basic foods such as corn and rice. The fundamental problem is that the target set by the state is so high that there remains too little for farmers to subsist on after submitting their allotment. Although they insist that the system was introduced to boost collective farm production, local authorities continue to collect staple foods from farmers, claiming them as provisions for the military and for residents in the capital (Pyongyang). Such excessive collections force farmers into extreme poverty and, in some cases, result in starvation.
Related Article: [Video Report] People under pressure for requisition of military provision

In 2011, North and South Hwanghae Province, the grain belt of North Korea, experienced a poor harvest due to flooding. Regardless of the difficulties that residents were faced with during this period, the regime collected the same volume of grain that year as every other year. The state’s apparent disregard for locals’ desperate conditions resulted in an unknown number of farmers starving to death the following spring.

Facebook Twitter はてブ Pocket Feedly
RECOMMENDATIONS
＜Inside N. Korea＞ "The Russia Boom": Traders Scramble to Make Russian Connections after Kim-Putin Summit
◆ Is Russia providing oil, food, and fertilizer? A reporting partner l...
＜N. Korea’s COVID-19 pandemic＞ Reports of people dying following the lockdown of Hyesan, Yanggang Province…The authorities fail to provide medicine and medicine to those in isolation…The Kim Jong-un regime is intent to prevent information leaks about the situation
According to two ASIAPRESS reporting partners who delivered reports on...
＜Inside N.Korea＞ Pregnant Woman Killed By Heavy Truck (2 Photos)
2017/Nov/13 Multiple reporting partners reported on a fatal traffic ac...
＜Special Rations for Kim Jong-il's Birthday＞ Gap Between Capital and Countryside Grows as Kim Jong-un Regime Blatantly Abandons Rural Areas
February 16 is the anniversary of the birth of the late Kim Jong-Il k...
＜Inside N. Korea＞ More Elderly and Children Begging in the Streets…Girls at Greater Risk of Sexual Abuse
The population of vagrants, known as "kochebi," has been on the rise ...
Polling Stations Under 24 Hour Surveillance As The Station's Notice Boards Vandalised
The Forthcoming Election in North Korea: 2014/March/07 Written byISHIM...
＜Inside N. Korea＞ Dangerous Directive: Kim’s On-Site Order Causes Series of Fatal Construction Accidents
A reporter partner living in the northern province of Ryanggang spoke ...
[Video Report] Chinese products and currency are playing a vital role in N.Korean market
Taken by our team ‘Mindeulle’ (ASIAPRESS) In October 2013, an ASIAPRES...
＜Inside N. Korea＞ Student absenteeism on the rise due to excessive requisition from school; a third of students are absent from school in local cities.
2016/Dec/19 Recently the number of student absenteeism has grown in l...
＜Inside N.Korea＞ Real Evaluation On Kim Jong-un By His Own People
2017/May/1 While I have worked in journalism specialized in North Kor...