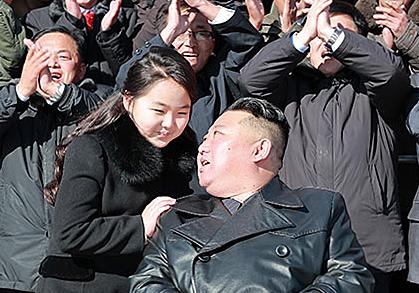 Kim Jong-un and his daughter take part in a commemorative photograph with persons of merit involved in the missile launch. The South Korean government believes that her name is “Kim Ju-ae.” (Rodong Sinmun, November 2022)

On November 18, North Korea conducted a test of a long-range ballistic missile called the “Hwansongpo-17.” Kim Jong-un inspected the test site along with his daughter. He also took commemorative photos with people involved in the missile’s development. How have North Koreans responded to the photos? (KANG Ji-won / ISHIMARU Jiro)

South Korean authorities believe that Kim Jong-un’s daughter is named “Kim Ju-ae.” The Rodong Sinmun calls her jajae, a term used to refer to one’s child in a respectful manner.

There appears to be a lot of interest among North Koreans toward the recent public appearance of “Kim Ju-ae.” ASIAPRESS asked two female reporting partners living in the northern part of the country about the atmosphere in the country and their thoughts about their leader’s daughter. The two women live in different areas. The opinions they express below are their own.

◆ Rumors circulate that Kim Ju-ae is a “great genius”

A: People aren’t talking rudely about her. Among themselves, all they ask how old she is, and comment on how similar she looks to her father and mother. We still have no idea how old Kim Jong-un is exactly. People are curious about how old his child is.

―― Were you surprised at seeing pictures of her published in state media?

A: I wasn’t particularly surprised. Kim Jong-il also took his son Kim Jong-un around on many on-the-spot inspections, so it’s natural that he’d take his daughter on them, too.

―― What are they saying about her?

A: Rumors say that she’s a genius and that she remembers everything she sees. She’s probably getting education tailored for gifted children, not studying with ordinary students. 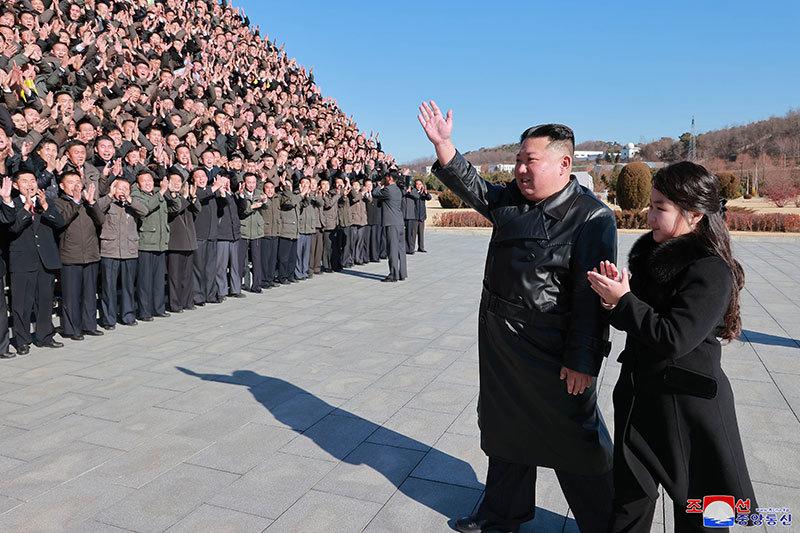 Kim Jong-un and his daughter take part in a commemorative photograph with persons of merit involved in the missile launch. The South Korean government believes that her name is “Kim Ju-ae.” (Rodong Sinmun, November 2022)

◆ Is Kim Jong-un really any different from the rest of us?

―― Is anyone criticizing her?

A: One elderly person living a difficult life said, “She’ll have nothing to envy in the world because she’s the daughter of the Supreme Leader.” The state security agency probably has gotten word of that comment.

―― What kind of things do people intimate with each other say?

A: One of my relatives said that “They say (Kim Jong-un) is like God, but he has a child, so he’s just like the rest of us.” I also wonder if he’s really that different from us. That being said, saying even that could be construed as insulting Kim Jong-un, so we can’t go around saying something like that.

※ “(We have) nothing to envy in the world” is a common phrase used in North Korea that suggests anyone who complains about an equal society ruled by the Supreme Leader will not be forgiven.

―― How have people responded to the appearance of “Kim Ju-ae”?

B: Oh, the jajae (a respectful term used to describe another’s child) photographed (and published in state media)? People can’t say what they really think. Who would dare talk about the daughter of the Supreme Leader? All they are openly curious about is her age, what school she attends, and whether the Kims have a son.

―― What rumors are spreading about her?

B: The Kims’ son still seems to be young. People don’t really know how many kids the Kim family has, anyway. There’s a rumor that Kim Jong-un took his daughter to the missile testing site because she’s a great genius and she’s advising her father.

―― When Kim Jong-un dies, do you think his daughter could rule the country?

B: That’s ridiculous. It’s nonsensical for her to become Supreme Leader, a position that has been handed down in the Kim family for generations. Moreover, it doesn’t make sense because she’s a girl, not a boy. The state controls its people and teaches them that.

―― People’s lives are tough, so do you think they can be unconditionally loyal and grateful to the leader?

B: No, but people are taught to shut their eyes, noses, mouths, and ears and be loyal just to the Supreme Leader. This nation is just a big pig sty.

B: Work colleagues talk about how ridiculous it is for the leader to bring his daughter around on official business. Parents with kids her age are more worried about ensuring they have enough to eat at the table. Children (of the leader) are probably all geniuses. When Kim Jong-un first appeared publicly, they said he was a “great genius” and a “genius of geniuses.” They’re doing that again, so it just seems like a ploy. She’s just a person like us.

――Why do you think she was taken to the missile testing site?

B: I can’t say. We had no idea about anyone else in Kim Jong-un’s family except for Ri Sol Ju (his wife) until now. Now that the daughter has appeared, everyone’s curious about her. However, people will get into big trouble if they talk about her. The authorities continue to investigate the ideological tendencies of the people as part of efforts to crackdown on rumormongering. Everyone’s being careful about what they say because even a trivial remark could lead to the authorities seeking out the source and put that person in big trouble.

At this point in time, ASIAPRESS was unable to confirm from its reporting partners that Kim Jong-un’s daughter is named “Kim Ju-ae.” While it seems clear that rumors are spreading throughout the country about her being a genius, the authorities could have intentionally spread these rumors among the population.