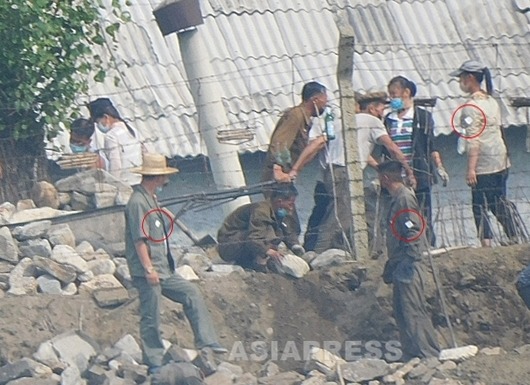 North Korean urbanites mobilized to repair a levy on the Yalu River in North Pyongan Province. Working without pay, these people face even more pressure on their lives. Taken by ASIAPRESS on the Chinese side of the border in mid-July 2021.

＜Interview with a N. Korean＞ (1) “It’s ridiculous that the government launches missiles while its people remain starving”

While the world is focused on North Korea’s missile launches, ASIAPRESS wanted to explore what kinds of lives North Koreans are leading, what they’re interested in, the current situation surrounding COVID-19 (which had, for a brief time, spread like wildfire in the country), and what kinds of things North Koreans want to share with the world. An ASIAPRESS reporting partner in the northern part of the country provided some honest answers regarding these questions. (KANG Ji-won / ISHIMARU Jiro)

The reporting partner interviewed for this article lives in the northern part of North Korea and is a businessperson. The interview, which was conducted by phone, took place right before the test launch of a long-range ballistic missile (the Hwasong 17) on November 18. ASIAPRESS smuggles Chinese cellphones into North Korea to maintain communication with its reporting partners.

◆ Many elderly people have died due to the lack of medicine

―― International commodity prices are increasing a great deal these days. What’s the situation in North Korea?

We depend largely on Chinese goods. All of the Chinese imports have increased in price. The items that have seen the most increase include medicine, cooking oil and condiments. Prices of these things have decreased a bit now with Chinese goods entering the country through Sinuiju and Nampo.

That’s right. Anyone caught selling medicines are unconditionally sent to forced labor brigades. Nobody’s allowed to sell medicine. In the past, private sellers could sell medicines, but now nobody is allowed to buy them from private sellers even if they have the money to purchase them. It’s also hard to obtain medicinal supplies. Many people around me who had been suffering from diseases have died. There’s no drugs and people can’t receive medical treatment. Elderly people who suffer from diarrhea die almost immediately. There’s a lot of people dying due to the lack of medicines even though they could survive if they just had a couple of pills.

※ A "labor training unit" is a "short-term forced labor camp" where those who are deemed to have disturbed the social order, disobeyed the authorities, or committed minor crimes are detained without judicial procedures and sentenced to forced labor for up to one year. These camps are in cities and counties throughout the country and are managed by the security bureau (police).

―― So, the authorities have prohibited private citizens from selling medicines. But is there medicine in state-run pharmacies?

I don’t see how that could be.

―― So, you’re saying that medicine needed by people just isn’t in those places?

It’s not there. Those working in the public health sector can get medicine along with the rascals in positions of power. All of us living in the lower rungs of society cannot.

―― The food shortage in the country is dire, but is there rice in the markets?

Yes, there is. It’s just that people don’t have money. Ordinarily, we’d need to purchase and sell the goods coming in from China, but that’s not how things are working right now. Really, there’s just nothing coming into the country from our perspective. Absolutely nothing.

People can’t buy things at the markets even if they want to because they don’t have the money. We’re facing tough and difficult circumstances. Now the authorities are preventing people from even selling food. 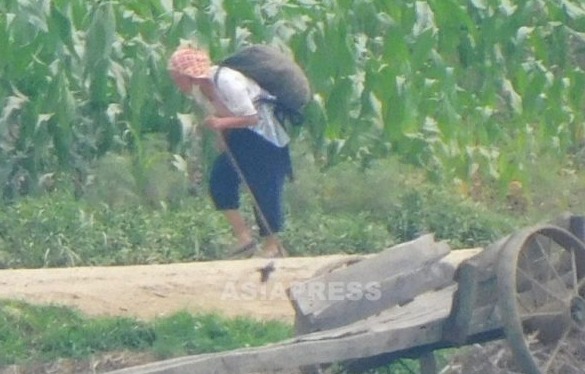 A woman weighed down with a large bag seen walking near a farm field. Taken by ASIAPRESS on the Chinese side of the border in July 2021.

◆ The COVID-19 situation has stabilized, but…

―― How is the COVID-19 situation. What percentage of the people around you have gotten the disease?

――What are the numbers based on neighborhood watch units?

Everyone in our neighborhood watch unit has gotten COVID-19. At first, they didn’t know it was COVID-19, and they just suffered from sore throats and headaches. Then we realized we had gotten COVID-19. Everybody got it.

※ Provincial cities do not conduct PCR tests except in rare cases, so it doesn’t appear that anyone received firm COVID-19 diagnoses.

―― How many people do you think have died over the past three years to COVID-19, malnutrition or disease?

―― Do the authorities lockdown cities or do public health authorities conduct crackdowns as part of efforts to combat COVID-19?

The situation has changed a lot from the past, so the authorities just instruct people to self-isolate at home for around three days. They’ll give people two days’ worth of fever reducers, but that’s it. During citizen meetings, they tell people to wear masks.

※ Neighborhood watch units (inminban) are the lowest administrative units in North Korea. They typically manage 20-30 households in a particular area. Inminban leaders relay orders from local district offices to residents and are also in charge of keeping a close eye on the (ideological) tendencies shown by ordinary people.

◆ A second round of immunizations

―― How many vaccinations have you received?

I got a vaccination in early September and another in early October. I didn’t know they were COVID-19 vaccines, however. I thought they were just flu vaccines.

―― Did other areas of the country conduct vaccinations, or was it just the border region?

I heard that other regions didn’t get vaccines, but I’m not completely sure.

―― Is there anything you’d like to tell the world? Tell us your honest opinions.

I’m not sure if this will sound right, but all of us just want to live like human beings. People here just believe that getting a meal means living well.

A lot of people have died because of the lack of medicines and because they can’t get medical treatment. There’s nothing to eat because of the border blockade. There’s so much difficulty that we aren’t scared of COVID-19 anymore.

The authorities are so overcontrolling that people are scared just to go out for a walk. There’s so much that is banned or prohibited now, and everybody just toes the government line. Everybody seems like a robot.

Yes, we just to as we’re told. We’re not allowed to criticize anything.

Honestly speaking, I wish the government would stop doing all those nuclear and missile tests and do something to improve the lives of the people. There’s a lot of people surviving off of just one meal a day.

That’s why I get really angry when I heard about the missiles. Our neighbor survives on two meals a day. They’d be really happy if they could get rice. I hope either the two Koreas get unified quickly or the country opens up. (END)

＜Related Article＞
Facebook Twitter はてブ Pocket Feedly
RECOMMENDATIONS
Highly Favored, But Hard to Procure, Pork a Rare Treat in N.Korea
2014/May/06 Written by PAEK Chang-ryong, a defector reporter North Kor...
＜Inside N. Korea＞ High Class: 5 Students Arrested for Smoking Meth at School
In North Korea, the rampant use of stimulant drugs is a serious proble...
＜Inside N. Korea＞ Tension Mounts as Regime Regulates Markets, Confiscates Stocks, and Slanders Price Gouging Shopkeepers
To prevent the spread of novel coronavirus to North Korea, the Kim Jon...
＜Kim-Trump Summit＞Left in the Dark: With No End to Sanctions in Sight, Citizens Face a Long Wait for Electricity
◆Left with little choice, citizens learn to steal electricity from the...
＜Inside N.Korea＞ Alert for Drone! Ammunition Distributed to Shoot Down!
2017/Mar/24 The North Korean government is said to start a joint dril...
＜Inside N. Korea＞ Power Play: Is China Responsible for Returning Electricity to Border Residents?
An ASIAPRESS investigation found that the supply of electricity to res...