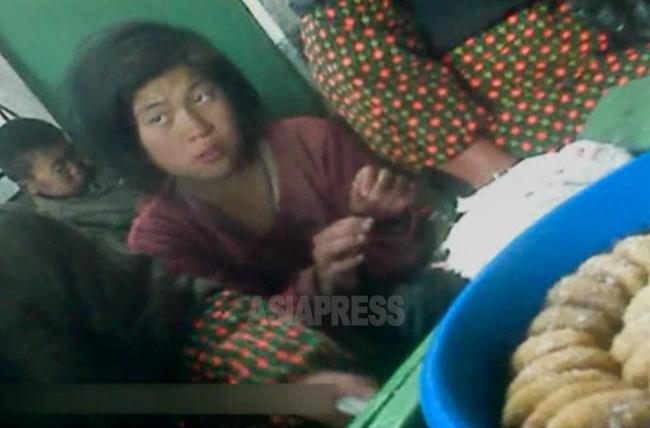 North Korean high school students have long taken videos and pictures with their cell phones to show to others, but their country’s government has recently begun efforts to crack down on what it calls “non-socialism behavior.” In late September, the government handed down an official notice to schools and citizen organizations in Hyesan stating that it would heavily punish such behavior. An ASIAPRESS reporting partner in Yanggang Province provided the following report. (KANG Ji-won)

In September, an incident involving a cell phone occurred in Hyesan. The reporting partner provided the details:

“A student at Sinhung Middle School was filmed giving a homeless person bread and ordering them to do martial arts moves. The student showed the film to other students, after which he was caught by the authorities. Then, in October, an official notice was handed down saying that the authorities will heavily control what videos are taken with cell phones.”

◆ Young people film dancing, kissing and harassment of the homeless

There are an estimated six million cell phone users in North Korea, or around 30% of the population. Use of mobile phones in North Korea rapidly expanded following the start of a new cell phone service in December 2008. Smartphones are particularly popular in the country given that they can take video and can connect to North Korea’s intranet. The phones cannot connect to the Internet, however.

What kind of videos do middle and high school students in North Korea like to make? The reporting partner explained:

“Middle and high school students, along with young people in general, have filmed dancing, kissing, fights that break out among adult neighbors, and ‘special moves’ such as roundhouse kicks, Taekwondo patterns, and breaking stones with fists. Young people have also filmed themselves harassing homeless people, where they’ll give the homeless food and force them to dance.

Cell phones are not allowed to be brought into school, but many students frequently do just that and gather to watch videos. Students with fun or unique videos to share can gain popularity among their peers. That’s why young people try hard to make videos.”

◆ The authorities monitor even the emails of young people

“The authorities have handed down an official notice saying that if there’s a problematic video on a cell phone, the phone will be confiscated and school officials, Youth League officials, and even family members will be held responsible. The neighborhood watch units have also warned that young people should avoid taking any strange videos.”

◆ N. Korea’s regime is concerned about the spread of information through cell phones

For the past several years, North Korean authorities have made unannounced house searches along with searches of personal items on the streets – all without warrants. During these searches, the officials look at the content of cell phones first. Another ASIAPRESS reporting partner in North Hamgyung Province said:

“Now I’m uncomfortable about even having a cell phone. Getting caught makes things tough, so I don’t even use the email or camera functions on my phone anymore. I just use it to call other people. There are people who complain that the government should just stop people from using cell phones if it’s going to harass people so much.”
Why, then, is the Kim Jong-un regime making so much effort to crack down on how cell phones are used? There are two reasons for this. The first is related to the government’s intensifying efforts to control the behavior and thoughts of young people. In this vein, the North Korean government enacted the “Youth Education Guarantee Act” in March 2021 as part of full-fledged efforts to exert control over young people.

The second reason involves the North Korean government’s distrust of personal devices such as cell phones. The country’s leadership is likely concerned about videos or pictures being taken of incidents, accidents and other aspects of the society that can then be spread throughout the country absent of government control.