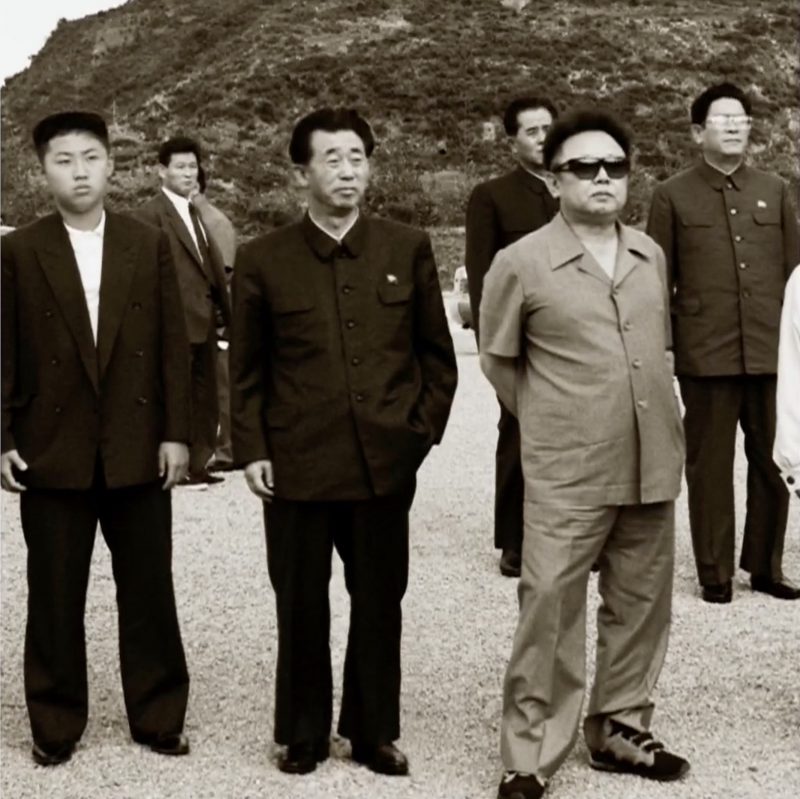 A young Kim Jong-un (to the left). The photograph appears to be taken when he accompanied his father on an on-the-spot inspection. The image was grabbed from a KCTV broadcast in May 2022 following the death of General Hyun Chul-hae.

Starting in late September, North Korea fired off a succession of ballistic missiles. The Japanese and South Korean media reported in detail about the firing range and other details about the missiles, but my upmost concern was focused on how the North Korean people viewed the launches. People in the country’s provinces are suffering from untold impoverishment, meaning that the government’s massive infusion of funds into the missile launches is essentially leading to the neglect of ordinary people’s lives and suffering.

◆ "When will our country’s food shortages be resolved?”

In mid-October, one of ASIAPRESS’s reporting partners living in the northern region of North Korea contacted me, saying:

“Most people have no interest in missile launches or things like that because they’re worried about putting food on the table. Is there discontent? Yes, of course. The government has long talked about us completing our nuclear weapons and missiles so that we can win in a war, but people are wondering when our food shortage problems will be resolved. People can’t say this aloud because they’re scared. All they can do is complain among those close to them.”

“The authorities have spread so much propaganda about how nukes and missiles are needed to protect socialism and the country’s autonomy – and that the American imperialists’ confrontational policies are causing people’s difficulties – that people without access to information from other countries just believe it.”

◆ The worst food shortages since the mass famine of the 1990s

The poverty suffered by North Koreans presently is the worst since the mass famine of the late 1990s. While the number of deaths by starvation are not as widespread as during that time, elderly people, children, and the sick are continuing to lose their lives due to the lack of food and medicine.

Following the start of the COVID-19 pandemic in January 2020, North Korea shut down its borders, stopping trade and preventing people from coming and going. Private business activities have been so restricted that people in cities without as much cash income as before are joining the ranks of the “food-short households.”

The following reports give us a glimpse of the tragedy unfolding in the country:

“Urban dwellers sent to farms are starving there during the fall harvest season”
“I’ve seen a lot fewer elderly people on the streets over the past two years”
“There was a family that, having exhausted all other options, committed suicide by eating rat poison”

According to statistics released by five UN agencies (including FAO and UNICEF) in July, there have been more than 10 million North Koreans, or 41.5% of the country’s total population, suffering from malnutrition from 2019 to 2021. This figure is similar to Yemen, which is embroiled in a civil war. It also shows that North Korea is Asia’s poorest country.

The Kim Jong-un regime, meanwhile, continues to plow money into nuclear and missile weapons development despite knowing that its citizens are starving. Some experts claim that the country’s military expenditures exceed 30% of its GDP. Given that people are dying of starvation and disease, the Kim regime’s logic of developing nuclear and missile technology to guarantee the security of the state is falling apart. The survival of ordinary people, it seems, is not of much interest to the country’s leaders.

North Korea was deeply transformed after Kim Il-sung established his monolithic leadership system in 1967. This system has been continued through the succession of his sons Kim Jong-il and Kim Jong-un coming into power, and the regime has come to require complete loyalty and obedience toward the Kim family from its people. There is little doubt that the development of nuclear weapons and missiles - while allowing ordinary people to starve - is aimed at perpetuating the rule of the Kim family.

North Korea can immediately improve the devastatingly low level of nutrition suffered by its people by opening up its borders, allowing people to conduct economic activities freely, reducing its overreaching military expenditures and putting the money into medical care for its people, modernizing its agricultural industry, and importing food from abroad. Unfortunately, the interests of ordinary North Koreans are at odds with those held by the Kim family.