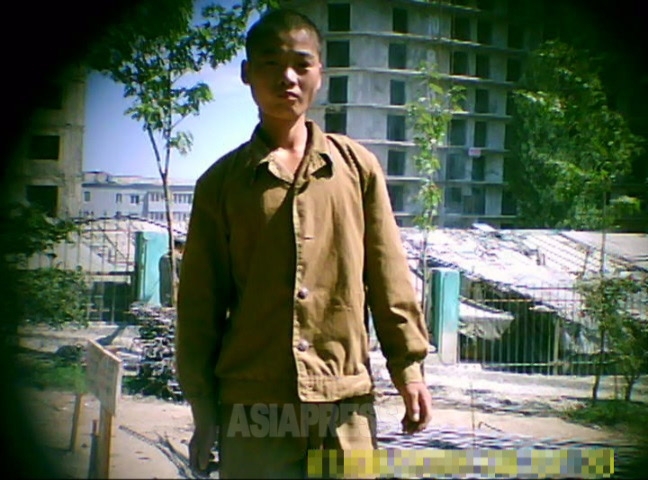 (Photo) A young man mobilized for the construction of a Pyongyang apartment. Photographed in Pyongyang in August 2011 by Koo Kwang-ho (ASIAPRESS)

A reporter partner living in the northern province of Ryanggang spoke with ASIAPRESS in early July about how Kim Jong-un’s impromptu orders led to a series of tragic accidents.

“On June 27, a mobilized worker in his 40’s fell while repairing the exterior wall of an apartment building in the Shinheung neighborhood of Hyesan City, dying later in hospital. On the 29th, another man in his 40’s, who was mobilized to paint the exterior walls of an apartment building in Hyesin neighborhood, fell and died instantly. Both of the men had been mobilized for the city’s beautification project, which was launched on Kim Jong-un’s spontaneous orders.”

The city’s beautification project is said to have begun after Kim Jong-un, on a visit to the area, spontaneously gave orders for the work. The orders were apparently issued on June 1, when North Korea’s Chosun Central News Agency reported that Kim Jong-un visited Chagang Province for on-site inspections.

The reporting partner heard the following account of the moment the orders were given.

“In Chagang Province to inspect the munitions factory, Kim Jong-un, upon seeing shabby houses along the main road, complained, ‘It’s such a shame. It is because of officials not doing their job that people are still living like this, in such poor houses, in the 21st century.’”

With these words, wide-scale urban beautification efforts were launched across the county. In this rush to please the leader and complete the various projects as soon as possible, however, mobilized workers have lost their lives.