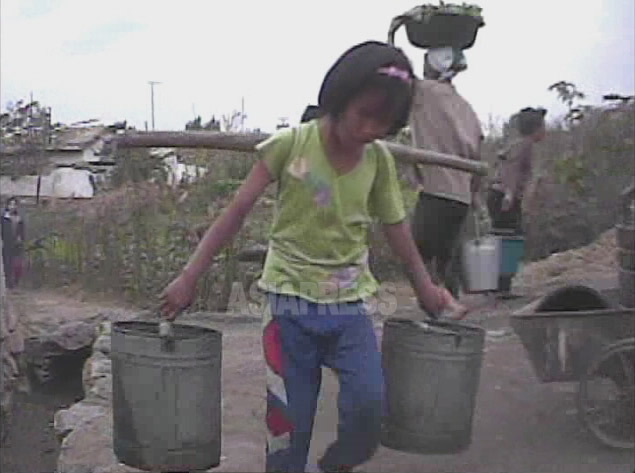 (Photo) A girl collects water during a power outage. With all her strength, she hoists the pails of water. Photographed in South Hwanghae Province in October 2008 by Shim Uicheon (ASIAPRESS)

◆Left with little choice, citizens learn to steal electricity from the government

According to a survey conducted by ASIAPRESS reporting partners in January and February, residents in the northern provinces of North Korea have been living without electricity, almost entirely, since November of last year. While government agencies and important industrial facilities have been guaranteed electricity, residential areas across Yanggang Province and North Hamkyung Province have remained pitch black. In addition, most areas in North Pyongan Province, apart from Sinuiju City, have been without electricity as well.

According to a reporting partner, “There is total darkness at night. Electricity isn’t supplied to these regions- not even 1 second’s worth. Some people manage to steal electricity from the government agencies, while others are bribing officials for it.”

Collecting information for ASIAPRESS, most reporting partners found that bribes for electricity in Yanggang and North Hamkyung Province typically amounted to 20,000 North Korean won per month (about 2.5 USD).
Next page : As 70 percent of the country’s electric supply…