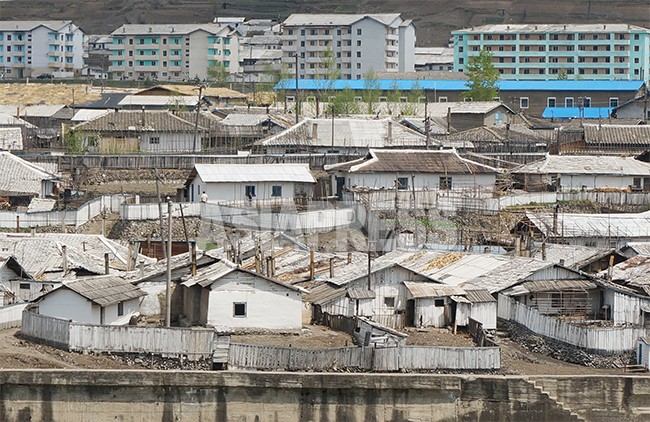 A photograph of Hyesan. The city’s lockdown was lifted in mid-June. There were reports of people dying amid shortages of food and medicine. This photo was taken in May 2014 from the Chinese side of the border. (ASIAPRESS)

fa-arrow-circle-right＜Inside N. Korea＞ Investigating the COVID-19 Situation (1)…Some areas of N. Hamgyung Province suffer a death rate of 3-5%…Nobody believes the government’s statistics…Increasing deaths of children and elderly people

The Korean Central News Agency continues to announce new fever cases every morning. On July 2, new fever cases were reported to be around 3,540, less than 1% of the cases reported during the peak of the pandemic in mid-May (around 390,000 cases). State-run media continues to claim that only 73 people have died so far. However, many people in country say that the statistics do not reflect reality. ASIAPRESS recently conducted an investigation on what has been happening in the northern part of the country following the North Korean government’s acknowledgement of a COVID-19 outbreak on May 12. This second installment of a multi-part series of articles focuses on circumstances in Hyesan, Yanggang Province. (ISHIMARU Jiro, KANG Ji-won)

I live in an apartment in the central part of the city. Four people have died from the 42 members of my inminban, including two elderly people, one child, and one young person.

I’ve heard that, on average, there have been around 2-5 deaths per inminban in the city. I can’t confirm whether these people have died of COVID-19, starvation, or another illness, but the authorities are claiming that most of these people died of other illnesses.

I live in an area of the city a little ways away from the city center. My inminban is made up of around 50 people and there have been 3 deaths, including two young people and one child. One of the young people who died was a former soldier who had been suffering from tuberculosis. He suffered from a high fever after the spread of COVID-19 and then died. The authorities claimed he had died from tuberculosis, not the coronavirus.

Disease control rules are still strictly enforced, and the authorities are also conducting crackdowns. People can’t visit other cities or counties, but from late June we’ve gradually been able to travel by car. I’ve heard a rumor that all the restrictions will soon be lifted.

◆ Lifting of restrictions on vehicular movement between cities

I understand that 2-3 people are dying per inminban on average. I don’t know whether people are dying because of the coronavirus, starvation, or other illnesses. It’s unclear what’s really going on because many people who died during the lockdown had already been suffering from malnutrition or lack of medicine to treat their illnesses.

There’s quite a few people who are suffering from the aftereffects (of COVID-19). They are losing their sense of hearing or smell, or even suffering from paralysis of the limbs. I’ve heard that inminban in the Sinheung-dong neighborhood, where the rich people live, have not suffered from any deaths.

(As of June 30) prohibitions on movement between regions are gradually being lifted. It’s not easy for people to travel by foot, but vehicles are allowed to move between cities. The authorities have allowed vehicles with just a driver and one other person to move goods. There are many trading company vehicles travelling back and forth between cities. (End)