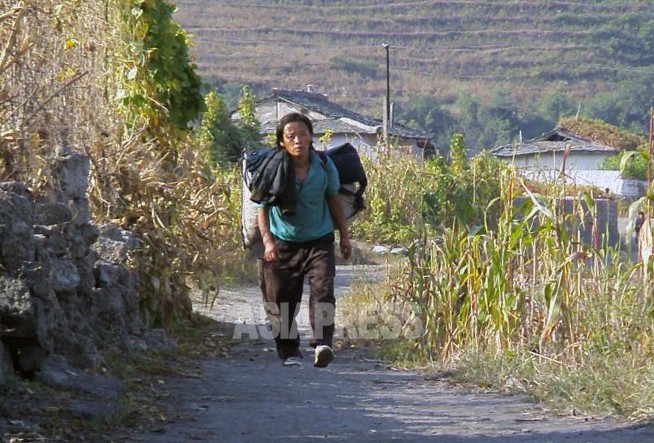 (File Photo) A female farmer carrying a large bag. This photo was taken by ASIAPRESS’s Jang Jung-gil in October 2008 in an agricultural area on the outskirts of Pyongyang.

The spread of COVID-19 in North Korea began in early May, right when full-fledged efforts started on the transplanting and seeding of rice nationwide. Bans on movement made it impossible for urban North Koreans to be mobilized to agricultural areas. The land on collective farms were full of weeds.

Only after the lifting of lockdowns and bans on movement in mid-June did the Kim Jong-un regime mobilize urban North Koreans to farms as part of efforts to make up for lost time.

“A,” an ASIAPRESS reporting partner in a city in North Hamgyung Province reported: “Everyone is being mobilized. Inminban and Socialist Women's Union members are being sent in rotation to the farms and working from the morning hours to 4 PM. Everyone must participate. People who return from work on the farms are given certificates showing their participation. If you don’t have one of these, you can’t buy things at the market. Of course, (the authorities) are strictly confirming the temperatures (of everyone being mobilized).”

※ Inminban are North Korea’s lowest administrative units and are made up of 20-40 households. The Socialist Women's Union is made up of non-working adult women, generally housewives.

People are also being mobilized from various government organizations, factories, and enterprises. They are given select areas of a collective farm to work on along with quotas to complete. Some workers “commute” to the farms, while others are there on a more permanent basis. In short, workplaces create “agricultural area labor brigades” to work on the farms until the end of the fall harvest.

Another reporting partner in Yanggang Province told ASIAPRESS: “The focus now is on weeding. Farmers had to weed their land at night when people weren’t being mobilized from the cities. There were also people who falsely claimed they had COVID-19 symptoms just to get out of the mobilizations.”