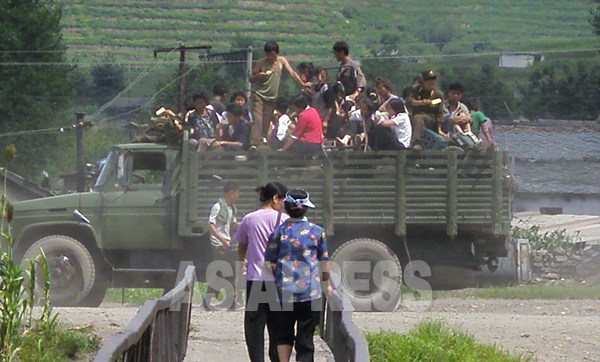 The back of this military truck is full of people. To receive money for gasoline and equipment, the military also runs a ‘servi car’—a transport service. In September 2008 in a suburb of Pyongyang. Taken by Chang Jeong-gil (ASIAPRES)

3-2 The emergence of a marketized transport system

Trucks and dump trucks started to work as passenger vehicles called “servi car.”  The word “servi” comes from the English word “service.”  In some areas, it is also called “boricha”–“bori” meaning to earn in Korean.  The official state organizations—the military, the police, the Party, the administration, the intelligence agency, and youth associations—run the servi-car business and take passengers to their destinations for money.  They also temporarily lend vehicles to individuals in return for commission fees from them.  The latter case is a form of “outsourcing” where the driver has to pay for the cost of gasoline and equipment, which goes straight to the organizations.
Related Article: ＜Inside N. Korea＞ Expansion of the market economy as the driving force behind social transformation–based on sources from inside North Korea. (PART1)

A “Bori bus,” a developed version of a service car, is also a popular choice for mid to long distance transportation.  People called “tonchu” (lords of money), new entrepreneurs, import second-hand buses and pay money to the government in order to operate a company under the name of the state.  Since private corporations can not operate in North Korea, there are companies called “basement,” superficially operating under the name of sate-owned companies but are essentially private businesses. 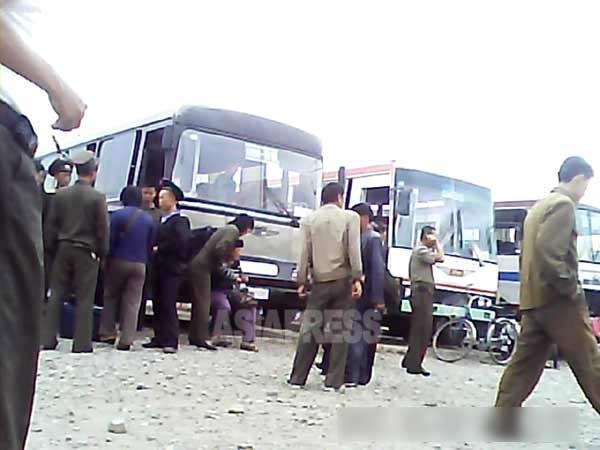 The bus terminal of a “boricha” in a suburb of Sariwon City, North Hwanghae Province. The destinations are written on the windows of the buses. Soldiers also use this transportation method. September 2013. Taken by our Team “Mindeulle” (ASIA PRESS)

The fare of a state-owned transport like trains and the city buses is a fixed price, however, that of “servi car” and “bori bus” depend on market prices that depend on resource prices (such as gasoline prices).  The graph below shows the fares of trains and buses for main lines, based on our survey inside North Korea.
Next page: The fare table of the state-owned railway connecting northern parts of North Korea and Pyongyang