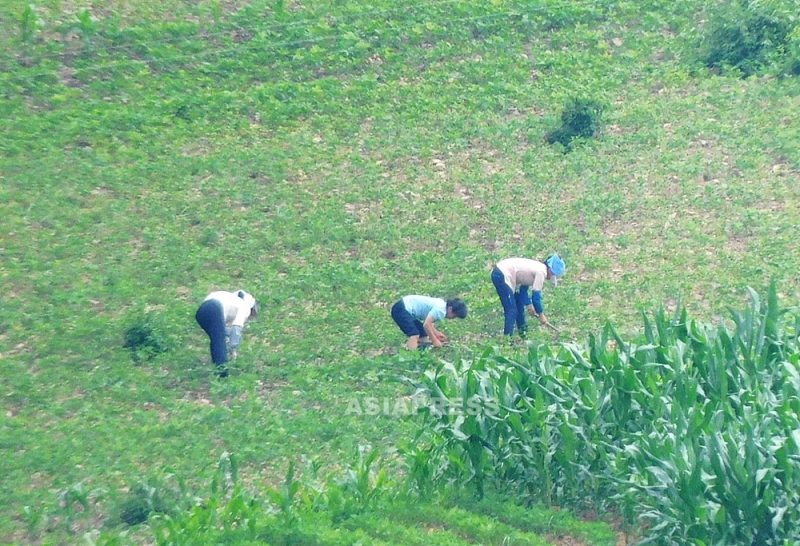 (File Photo) Farmers weeding by hand. This photo was taken in July 2021 on the Chinese side of the border. (ASIAPRESS)

◆ People are being stopped from farming on private plots

Meanwhile, the difficulties faced by farmers continues. “A” told ASIAPRESS that: “There’s been an increase in food and money-short households, with many people suffering from edema on their faces due to malnutrition.”

According to “A,” farmers are allowed to farm private plots of land up to 100 pyong, but because there’s not enough food distributed by the collective farms, people are farming in “hidden plots” near mountains on top of their original private plots of land. These hidden plots of land are called sotoji, which the Kim Jung-un government has strongly cracked down on as part of efforts to protect the country’s forests.

Despite the crackdowns, farmers have avoided being caught by secretly cultivating beans or barley near reforested areas. However, even this is being frowned upon by the authorities this year. “A” provided further explanation about this:

“If farmers stick to farming their own land, they don’t do their work on the collective farms. There are people who cultivate crops on small plots of land deep in the mountains, but they face confiscation of everything if they are caught. If you’re lucky, you can hand over 40% of your crop yield to the forestry management officer for him to turn a blind eye.”

Farmers are facing food shortages due to exploitation and crackdowns by the authorities. (KANG Ji-won)