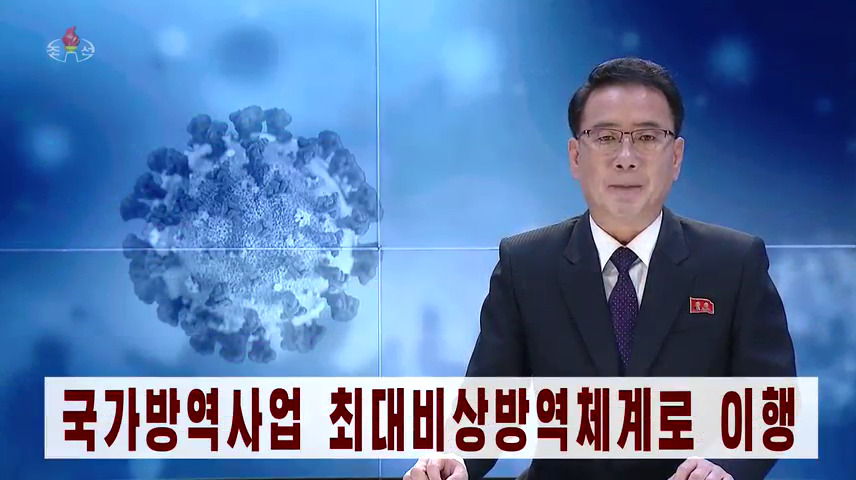 A KCTV broadcast on May 14 informing viewers of North Korea’s COVID-19 situation.

It has been a month since the Kim Jong-un regime acknowledged an outbreak of COVID-19. North Korean authorities have been releasing the number of new fever cases, recoveries and people undergoing medical treatment on a daily basis; however, they have stopped releasing information about deaths. It is unclear whether the data released by the government is accurate, and whether fever cases refer to people infected with COVID-19. There is so little information available, it is impossible to know the real COVID-19 situation in the country and how the authorities are responding. ASIAPRESS received reports from several reporting partners in the northern part of the country in early June. (KANG Ji-won, ISHIMARU Jiro)

◆ The authorities simply use temperature checks to determine infections

“A” lives in Yanggang Province in an apartment with his family. “B”is a party member who lives in a city in North Hamgyung Province.

―― How are the authorities conducting temperature checks?

A:  The head of the inminban (people’s unit) and a member of the “emergency quarantine team” go around to each household in the inminban to check people’s temperatures 2-3 times per day. They say that the government will provide masks and medicine if people self-report they have fevers.

―― What happens to people with fevers?

A:  They are isolated and can’t leave their houses for any reason. No one is allowed to visit them and officials talk to them from outside their doors to check how they are. Around a week after they begin their quarantine, officials check their temperatures. If their fevers have subsided, they are registered as having been “cured.” While registered as “people with fevers,” even the heads of their inminban are not allowed to come in contact with them, which means their temperatures are not taken during that period.

―― How do the authorities place people in quarantine?

A:  Most are quarantined at home. People who live by themselves are put into isolation facilities. There’s no set period in which people are quarantined. The authorities are saying that symptoms (of COVID-19) improve after a week to 10 days, and the quarantine period ends once fevers subside.

A:  Not at all. All they do is conduct temperature checks. People with difficulties breathing or serious symptoms go to the hospital, but there’s no particular medical treatment they receive there. I hear they are simply given fever reducers through IV and cold medicine.

A:  I also got infected by COVID-19. I had a hard time after getting a fever, but recovered eight days later. I received a medicine called paracetamol from my inminban. There are tons of people with fevers. However, most are recovering. People want the lockdowns to be lifted as soon as possible. The atmosphere of tension has subsided compared to the beginning (of the lockdowns).

※ He doesn’t know if he actually got infected with COVID-19 because he was never tested for the virus. Paracetamol is a commonly available fever reducer.

―― Tell us about the situation in the district you’re living.

A:  I heard from the head of my inminban on June 6 that we have six people in serious condition, 12 people who have recovered, and seven people who have symptoms (of the coronavirus).

※ One inminban appears to be made up of around 40-100 people.

Next Page： ◆ Sickly, malnourished elderly people are dying
1 2
Facebook Twitter はてブ Pocket Feedly
RECOMMENDATIONS
＜Inside N.Korea＞ North Korean state agencies openly engage in large-scale smuggling
◆ Large-scale smuggling carried out in the open "All kinds of goods ar...
Profiles - ASIAPRESS N.Korea Reporting Team
Ishimaru JiroIshimaru was born in 1962 in Osaka, Japan. He is the Osak...
＜Interview with N.Korean People＞ Defection of Thae Yong-ho, the minister at NK mission in London, is “natural”
ASIA PRESS, amid of flow of news from South Korean media, covering th...
＜Inside N. Korea＞ Field Testing: Regime Releases Thousands From Quarantine for Farming Season, Days Before Receiving Coronavirus Test Kits
According to reporting partners in North Korea, people who had been pl...
＜Inside N. Korea＞ Homeless and Helpless: Residents Young and Old Beg as Population Fears a “Second Arduous March”
◆ People’s lives deteriorating as sanctions continue There is a growin...
＜Inside N. Korea＞Porn and Punishment: What a Sex Scandal Reveals about the Regime’s Struggle to Control Outside Information
◆80 arrests and a massive rally to protect the youth from ‘foreign inf...