It was discovered that the North Korean 2014 calendar does not mark the birthday of the First Secretary, Kim Jong-un. His birthday is 8 January, which is blank in the newly published calendar. The ASIAPRESS North Korea Reporting Team obtained the calendar from a North Korean trader in China. 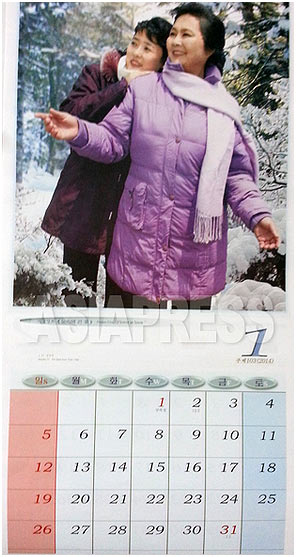 The North Korean calendar of 2014 does not mark Kim Jong-un's birthday, 8 January, as a national holiday. It is left blank, thus marking it as an ordinary day.

On the 2014 calendar, which features prominent North Korean screen actors, the date of Kim Jong-un's birthday is left blank. This means the North Korean state does not recognize this day as a national holiday.

Other national holidays remain unchanged from the 2013 calendar, this includes the birthdays of Kim Il-sung on 15 April, and Kim Jong-il on 16 February, both marked in a red letter.

There was speculation that this year's 8 January would be marked as a national holiday since the North Korean state has been forging ahead with the idolization and absolutization of Kim Jong-un following the death of Kim Jong-il in 2011.

However, it seems that the state plans to develop a series of images imbuing moralistic ideals for the duration of the three-year mourning period. This is in accordance with Confucian dictates, predominant in Korean traditions. It is also related to the fact that the North Korean supreme leader should be revered as the 'greatest personification of moral obligation'.

The true reasons for the omission to the 2014 calendar are as yet unclear, but there is a possibility that Kim Jong-un felt pressured to wait to include his own birthday on the list of nationally observed days, following the massive liquidations currently taking place since the execution of Jang Song-thaek, former Vice Chairman of the National Defense Commission.
### Rimjin-gang ------

Facebook Twitter はてブ Pocket Feedly
RECOMMENDATIONS
＜Inside N. Korea＞ Poverty-Induced Civil Unrest Prompts Orders to Strengthen Security Around Military Bases, Police Stations, and Kim Family Statues
In North Korea, security at military armouries, security agency facil...
Voice of the ordinary N.Koreans: “Nuke test only brings hardship to people,” “No better life in Kim Jong-un’s era”
Asia Press has covered the inside situations and responses of North Ko...
＜N. Korea＞ A Mysterious 33% Surge in the Won Against the RMB…Are the Authorities Manipulating N. Korea’s Currency?
The value of the North Korean currency, the won, has suddenly skyrocke...
Living in Pyongyang - The Real Story (2) Losing the Struggle to Survive Leads to Suicides and Homeless People
2013/August/09 Speaker： GU Gwang-ho,Rimjin-gang reporter Editors：ISHIM...
＜Inside N. Korea＞ “Death to Defectors”: Kim Yo-jung’s Campaign Incites Hatred Against Defectors and Stokes Fear among their Families Still in the North
The Kim Jong-un regime has been holding mass rallies across the countr...
＜Inside N. Korea＞ A report about the COVID-19 situation from a party member in North Hamgyung Province: Those with fevers are placed in isolation and their apartment buildings are put under lockdown, People continue to go to work and the markets remain open, People are more scared of lockdowns than the disease
On May 13, the day after North Korean authorities officially acknowle...