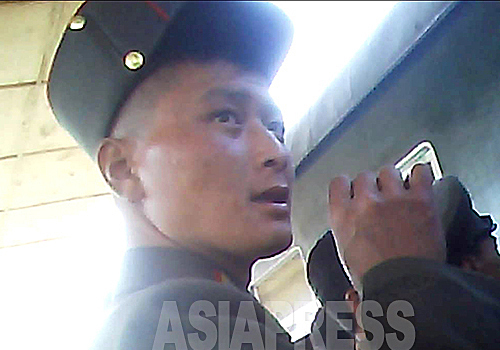 (Photo) A soldier tries to board a train with a cigarette in his hand. Photographed at Hyesan Station in October 2013, ‘Mindeulle’ (ASIAPRESS).

This spring, soldiers who were discharged from the People's Army and subsequently deployed to rural areas have been causing problems across the country. Discharged soldiers have been behind violence, theft, and other acts that have broken local order. Indeed, these incidents have become so frequent that the police cannot respond in any meaningful way. In mid-July, Mr. Kim (pseudonym), a reporting partner living in North Hamkyung Province, investigated a cooperative farm to learn more (Kang Ji-won).

“When a large number of discharged military personnel arrived, three of them were assigned to my work group. There were only two older men working there, so I thought it would be a big help to have more men, but they've been causing a lot of problems and causing trouble.”

When Mr. Kim visited Cooperative Farm ‘A’, an old acquaintance of his told him the following:

The main problem is the issue of women. Those who have been discharged from the military are in their mid-to-late twenties and have just finished eight years of military service. Therefore, they follow women around without coming to work, trying to find a marriage partner, and have constant disputes with the women's families. The report continued:

“When they fight, they beat others until they bleed. Also, they swear at the women on the farm. At the beginning of July, one of them drank alcohol and beat up the group leader, and was questioned by the police. However, even the police were having trouble controlling them. A farmer lamented that it was as if a group of bandits had arrived.”

At Farm A, they originally tried to create a sub-group consisting only of discharged military personnel, but since they caused too many problems, they gave up and dispersed the group.

After the Workers' Party Congress held in this January, the Kim Jong-un regime took the decision to drastically reduce the number of military personnel. The period of military service was shortened from 13 years to 8 years for men and from 8 years to 5 years for women, and soldiers who had reached maturity were to be discharged as of 2020.

The main purpose of this was to redirect the workforce to key industries that were severely understaffed. Discharged military personnel were mainly deployed in rural areas, mines, coal mines, and construction sites for national projects.

“There were complaints from those who were to be discharged from the military, saying, 'You mean I have to spend the rest of my life with a stag beetle, a pickaxe, and a shovel?’”, said another reporting partner.

◆ Placement in rural areas is the worst

In North Korean society, farmers are positioned at the lowest level. In addition to being poor, they have almost no chance of being allowed to move to cities or change jobs, even if they want to. Their children and grandchildren will have to work as farm laborers. It is the worst possible placement for a young person.

The government also seems to have taken care in establishing farming villages. Mr. Kim explains the situation at Farm A as follows:

“We were instructed by our superiors to be responsible for providing food for discharged soldiers, so we managed to prepare and give them food, but they sold it all and bought clothes. Moreover, since they had nothing to eat, they were clamouring to be registered along with the ‘Food Insecure Households.’”

A " Food Insecure Household" is a household that has run out of cash and food. If recognized as such, a household will receive some food support from the local farm and be exempted from going to work in order to earn money off the farm.

◆ Joining the Workers' Party is Difficult and Futile

In North Korea, it has been said that “if you join the military, your head will turn to stone in three years,” meaning that even if you are discharged and return to society, you will be useless. Nevertheless, most discharged soldiers live diligently for a year as candidate party members in order to be given preferential treatment upon joining the Labour Party. However, at Workers' Party Congress held in January 2021, the rules were changed and the procedure for joining the party became stricter.

“I heard that they tried to make the discharged soldiers into candidate Party members and give them a decent life on the farm. However, when they were placed in the countryside, they had no hope for future development and were not sure whether they could become Party members or not. It's hard and frustrating.”

“It's almost as if a bunch of disgruntled people have been gathered and put on the cooperative farms. It is almost inevitable that these young people will become violent when placed in such groups.”

＜Related Article＞
Facebook Twitter はてブ Pocket Feedly
RECOMMENDATIONS
Falling Birth Rate and Draft Dodging Erode N.Korean Military
2014/July/29 Written by PAEK Chang-ryong, a defector reporter"Starved ...
Feuding Over Fuel: Regime’s Lifeline Under Threat as China Arrests Gasoline Smugglers
◆ Gas prices have stabilized- but why? North Korea has been subjected ...
From The Editor
To the Readers of the English Edition of Rimjin-gang : ISHIMARU Jiro (...
[Video Report] What do the ordinary people eat in N.Korea? There are many types of food sold at hawker stalls. (Hawker stalls are individually owned food stalls)
What kind of food is available at hawker stalls in North Korea? In Jun...
＜N.Korea＞ N.Korean Military Facing Recruit Shortage Due to Increased Draft Dodgers and Deserters
2017/Jan/20 An ASIAPRESS reporting partner inside North Korea reporte...
With time running out for the aging families of Japanese abductees, the Abe administration must lay out a roadmap for settlement talks with North Korea (ISHIMARU Jiro)
January 12 marked the 59th birthday of Keiko Arimoto (有本恵子), a Japanes...