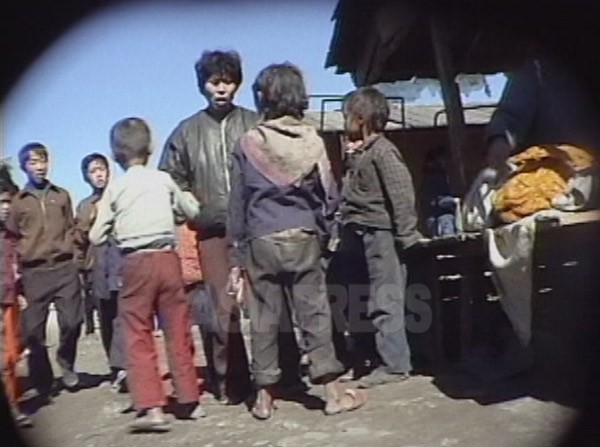 (Photo) 3 Kochebi children abused by a woman who says they are in the way of her business. Photographed by Kim Hong in September 1999, when hunger was at its worst, in Musan County (ASIAPRESS).

Since the beginning of June, the lives of the North Korean people have been deteriorating as if a weir had been broken. It is frustrating that the reality of the situation has not been conveyed to the world. This is because the Kim Jong-un regime has closed the borders to prevent the spread of the coronavirus, preventing people from coming in and out of the country, thus preventing information from being released. The writer has maintained contact with his reporting partners using a Chinese cell phone brought into North Korea. However, the current situation is judged to be the worst humanitarian crisis in Asia.

As I have mentioned several times before, the cause of this crisis is the blockade of the border with China, which has led to a sharp decline in trade. Another factor is the tightening of controls on movement and commerce within the country- it is as if martial law had been declared.

The significant slump in trade reduced everyone's cash income. Food is no longer available for those who have depleted their reserves. The fears that residents expressed a year ago, "I'm more afraid of hunger than of coronavirus," have become a reality. Vulnerable groups such as single senior citizens, single mothers, and families with sick people were the first to fall on hard times.

What do people do when they can't afford to live? Our reporting partners explained as follows:

"When people run out of cash, they borrow money, rice, or corn from their neighbours or acquaintances. When that becomes difficult, they pawn or sell their household goods. In our neighbourhood, we often see debt collectors barging in and taking away everything, even pot kettles. The only recourse left is to turn to crime or, in the case of women, prostitution. In the end, they sell their houses."

◆Old people are dying in many places.

Those who have lost their homes have no choice but to wander the streets. Since last summer, there have been reports of an increase in the number of "kochebi" (homeless people) from all over the country. It is getting common to see abandoned children and older people begging in the market. What has been driving the situation is the sharp rise in grain prices since June. North Korea is now in the off-season leading up to the fall harvest. As such, at one point in early June, the price of white rice rose by 1.7 times and that of corn by 2.4 times compared to the month before.

Recently, many mines and factories have seen an increase in the number of workers who cannot come to work due to malnutrition. "It is no longer unusual to see collapsed people on the streets. The 'kochebi' that emerged last year may have all died," said a reporting partner from Musan City.

What shocked us was that since the latter half of June, we have been receiving reports from all over the northern part of the country that the elderly are dying rapidly. For example, a reporting partner in Hyesan City said, " Their bodies are so weak from not being able to eat that they die easily from colds and diarrhoea. This is because medicine is no longer coming in from China. If things continue like this, all the old people will die."

After Kim Jong-un's statement on June 17 acknowledging the food crisis, the North Korean authorities began to take the situation seriously. Surveys of "Food Insecure Households," those who had run out of cash and grain, began immediately in many areas of the country. On June 30, a reporting partner informed us that 5 kilograms of corn had been urgently provided to each of these households.

The chaos that is occurring in North Korea is an artificial disaster. It is a crisis of humanity caused by a lack of concern for the people and a preoccupation with coronavirus control. I want to call attention to the North Koreans’ plight so that the situation will not become even more tragic.

＜Related Article＞
Facebook Twitter はてブ Pocket Feedly
RECOMMENDATIONS
Exemplary-contributors Praised At The Public Notice-board
North Korea Food Situation - 3 2011/September/19 Report by Kim Dong-ch...
＜Inside N. Korea＞ Vagrant children are being captured and sent to the army at the age of 17.
◆ Hungry children on the run The economic downturn continues due to s...
University Students Are Bored With Formal Uniforms - Women Wearing Shorter Skirts As A Sign of "Rebellion"
The Daily Life of North Koreans2014/April/16 Written by PAEK Chang-ryo...
＜Photo Report＞ Cultures of ‘Enemy Nations” infiltrating into N.Korea: Mickey Mouse, Hello Kitty, and Doraemon.
2017/Jan/30 “Let’s defeat the “scheme of decayed cultural infiltratio...
N.Korean Authorities Distribute Jang Song-taek "Purge List" to Local Officials
2014/January/28 Written by ISHIMARU JiroNotification issued that Party...
＜Inside N. Korea＞ Worsened power supply paralyzed the train system, reportedly causing deaths in a stopped train
2016/Nov/18 According to ASIAPRESS partners in North Korea, the power...
Chang Jeong-gil on Pyongyang's Kangdong County
In the spring of 2008, the Rimjin-gang editorial staff asked our Nort...
＜Inside N. Korea＞ Would a visit by the Pope bring freedom of religion to North Korea, a country where even fortune-telling is illegal?
In early October, an unusual public event took place in Hyesan, North ...
＜Inside N.Korea＞Execution of Border Guard Officer Accused of Overlooking Defectors
On April 4, a reporting partner of ASIAPRESS, in a northern area of No...
＜PHOTO REPORT＞Sino - N.Korea Border: ［PART3］Tensions High In The Border City As A Special Team is Dispatched For Crackdowns
2014/April/20 (This report first appeared in the Korean and Japanese e...