The newly issued temporary money coupon "tonpyo." The photo was provided by a North Korean defector who obtained it.

When North Korea was unable to import from China special paper and ink to print its currency, the government temporarily issued “tonpyo” (cash vouchers) in August to September of last year. The government claimed that the tonpyo can be exchanged for regular currency at any time. However, soon after they were issued, ordinary North Koreans avoided using them due to distrust of government economic policy and the poor quality of the paper used to make them. ASIAPRESS examined what happened to the tonpyo about a year after their first appearance. (KANG Ji-won / ISHIMARU Jiro)

◆ People avoid “tonpyo” at all costs

“Tonpyo” are cash vouchers issued by North Korea’s Central Bank. They are worth 5,000 North Korean won, the same amount as the highest value of currency issued by the state.

Right after the “tonpyo” were issued in October 2021, ASIAPRESS obtained a confidential document written by the Propaganda and Agitation Department of the Workers’ Party of Korea. The document stated frankly that people distrustful of the Kim Jong-un regime’s currency-related policies were either refusing to use “tonpyo” in their transactions or were selling the “tonpyo” at steep discounts of up to 80% their face value.

A year has passed since then. An ASIAPRESS reporting partner living in the northern part of the country provided a report on the current situation regarding “tonpyo”.

―― Are “tonpyo” still being used today?

Other than people who try to earn money through tonpyo, ordinary people all try to avoid them. You could say that there’s really no one who uses them. 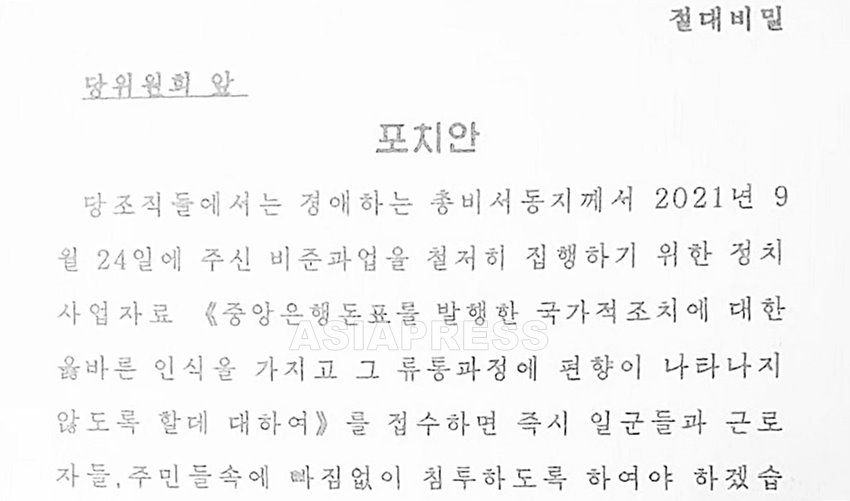 The cover page of a confidential document ASIAPRESS obtained in October 2021.

◆ “Tonpyo” still being sold at a discount

―― Are tonpyo still being bought and sold at a discount?
There are people who collect“tonpyo” in order to earn money. They’ll purchase a 5,000 won “tonpyo” for around 4,300 won with a view to exchange it for cash at a profit when the government prints regular currency again. When people who do this are caught, the government confiscates all the “tonpyo”. Kim Jong-un has even handed down a direct order about this, so people’s “tonpyo” are confiscated without any recourse if they’re caught.

―― Are “tonpyo” used by businesses?

The government claims that tonpyo are to be used to pay workers’ salaries, but this policy is only in place at a couple of state-run companies (in the city I live). In reality, there’s likely few instances where people are paid with “tonpyo”. That’s because there’s just so many people who don’t want them. Also, if you receive your salary in“tonpyo” you have to return (to the company) the cash difference between your salary and the “tonpyo” you receive.

―― Then, it seems “tonpyo” aren’t used much or at all among businesses.

The government continues to order the service industry (restaurants or state-run shops) and the public transport (bus) industry to use “tonpyo”. In short, it’s telling businesses to use the “tonpyo” in transactions with other businesses. The public transport industry, however, isn’t using “tonpyo” that much because long-distance bus services have been hit hard by COVID-19 (restrictions on movement). People in the service industry don’t like paying customers cash when they give out change. The paper the“tonpyo” are printed on is of such poor quality that they’re damaged easily, making it difficult for people to use them.

◆ Only people with power use “tonpyo” to make money

―― Can “tonpyo” be taken to businesses to pay for goods?

Cash or “jonpyo” (certificates used in B2B transactions) are needed to purchase goods. A woman who worked as an accountant at a steel factory in the city collected “tonpyo” and exchanged them for “tonpyo” to purchase goods from bread and beer factories for her business. But she was caught by the authorities and sentenced to six months in a forced labor camp.

※ North Korea’s forced labor camps are for people who disturb the social order or commit light infractions without going through the court system. The camps are operated by the city and county police.

ASIAPRESS understands that there are limits to the amount of regular currency “tonpyo” can be exchanged into. Only powerful people, meanwhile, can use “tonpyo” to make money given that cadres from ordinary factories or companies are unable to.

＜Related Article＞
Facebook Twitter はてブ Pocket Feedly
RECOMMENDATIONS
＜Inside N. Korea＞ North Korea's border with China is under martial law
Nighttime curfews and road closures continue at 6 a.m. People complai...
＜Inside N.Korea＞March Exports to China Plummets by 89%. Manager of Trading Company says “High ranks having really hard time.”
◆Manager of Trading Company says “High ranks having really hard time.”...
＜Inside N.Korea＞ North Korean Military Reinforces Protection Wall of Gallery, Feared by Trump’s Attack on Syria
2017/May/18 It is said that North Korean military started to repair a...
“We Don’t Want to Meet”: Fearing Coronavirus Infection, China Rebuffs N. Korean Advances at the Border and Delays Resumption of Trade to Late-May
◆ No fertilizers imported for the farming season The China-North Korea...
＜Interview with a North Korean Wwoman＞ Women “Revolt” Against Their Husbands as. Coronavirus MeasuresCoronavirus StrainChanges Marriages Nationwide Relationship [ISHIMARU Jiro]
A year and a half have passed since the COVID-19 pandemic began. Many ...
＜N.Korea Crisis＞ Why is there a Food Shortage Crisis in the Breadbasket Region of Hwanghae? (PART3)
2012/May/11 Written by LEE Jin-suFarming Villages' Crops Usurped by th...