Declaring nationwide 70 days battle (*1) to prepare the Workers’ Party conference in May, which was held 36 years ago, the North Korean government is tightening the control over the people. Security agents check every household to catch the absentees without a leave notice and the runaways from their work places. Complaints are rising as the people can’t receive wages or rations even if they go to work places. Several inside reporters informed that the people are coerced to deposit 1,000 won to banks every month during the period of the 70 days battle. (Reported by Kang Ji-won/ Edited by Paek Chang-ryong)

On March 8, A, a reporting partner of ASIA PRESS in north Hamkyung province reported that the regional government issued an order to make people work in the workplace with no one exempted and conveyed the atmosphere of the situation as follows.

(Even though we go to work) there is nothing special, we are just doing what we used to do. Security agents (police) are checking every household and sending the absentees without permission and the runaways to labor camps if caught. There are a lot of absentees and runaways who are caught by the authorities. 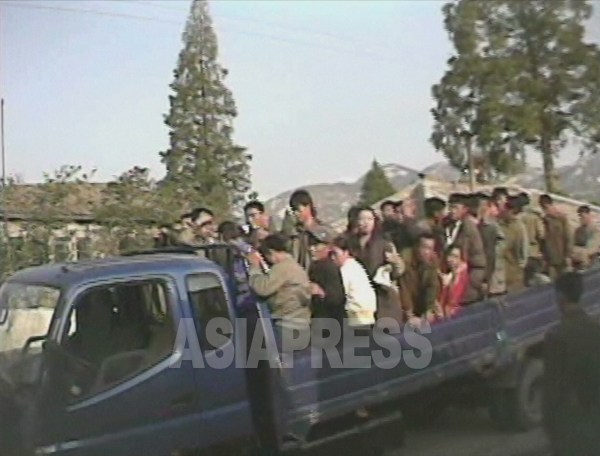 Labor camp detainees packed in a truck are heading for the work site in the early morning. Taken by Shim Ui-cheon at east Haeju city of Hwanghae province in September 2008 (ASIAPRESS)

All the people in North Korea are forced to enroll at a workplace after graduation from middle school except those who enlist in military, enter college, or become a homemaker. However, people are trying to do their own business by abandoning their workplaces since the wages are not paid due to a deteriorated economic situation. The authorities crack down on those who are doing their own businesses or hired in a private business, defining them “runaways”

Checking and control are enforced but some rich people pay certain amounts to the authorities to be exempted from the 70 days battle. Our reporting partner reported that they require people to pay 600,000 won (=U$70) per person, saying “Pay the money as a way to join the battle!”

Another burden of “the 70 days battle” is added to the people who have been forced to pay enough money and collective delivery of material by the authorities. There have been repeated patterns of collecting money from the people as ‘supporting money’ on big national events.