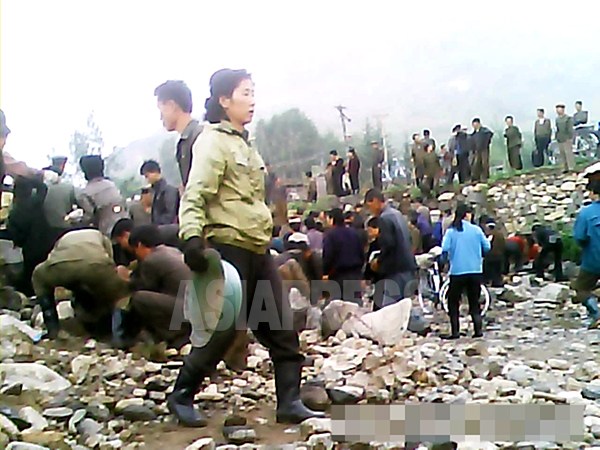 People who were mobilized for river improvement. Complaining is rising as mobilizing people is more frequent for the coming party’s conference. Taken by ASIA PRESS at a local city of northern area on June 2013

On telephone conversation on March 16, B, a reporting partner in other part of north Hamkyung province, told that the regional office began to urge everyone to deposit 1,000 won per month at a bank as 70 days battle started.

Officials of the regional office visit every house, saying “The state doesn’t have money. Our safe is totally empty. If you deposit 1,000 won every month until the end of 70 days battle, interest will be given." While I deposited my money two days ago, I was not told how much the interest would be. He continued that the people are negative to the urge for deposit as they had experienced the huge loss of their money at the currency reform (*2) by forced deposit.

He reported the current situation there, saying “they asked to deposit 3,000 won (amount for the period from January to March) and then suddenly changed the amount to 5,000 won, matching the period of 70 days battle. The officials who want to save their faces by achieving the goal demanded to deposit money in advance. But people remain unconvinced.”(There is no one who voluntarily goes to bank for deposit. Once bank get the deposit, they usually takes 50% of the withdrawal as commission.)

It is interesting to see how they draw the economic planning and how they would accomplish the goal in North Korea where functional manufacturing facilities are rare due to the paralyzed economy. Rodong Shinmun (a North Korea government newspaper) runs articles on ‘achievement of economic goal earlier than planned’ almost every day after the beginning of 70 days battle.

The front page of Rodong Shinmun on Mar 17 propagates how four factories in Pyongyang accomplished the goal of the first half of this year under the title “Achievement of the people’s economic goal for the first half of this year.” While no information is available for how they draw economic planning, it is interesting to see the reports that the factories have accomplished their goals even though there are two months more remaining for the target date.

Many endeavor competitions were started in North Korea, when there were extraordinary environments, or when they felt a necessity to secure the stability of the regime. The first 70 days battle, called “the battle for increasing,”(*3) was started by an order of Kim Jong-il for 70 days from October 21, 1974 to the year end. The battle was used to give justification to the nomination of Kim Jong-il as the successor. Being awarded with the title, “the hero of the republic,” in the following year, he was able to solidify his position as the successor with the achievement through the battle. It is apparent that the achievement of 70 days battle at this time must be attributed to the excellent guidance by its great young leader as well.

The central committee of the Workers’ Party pleaded its members with a letter to wage 70 days battle for the upcoming 7th Party’s conference on February 24. If counted that date as the first day, 70 days battle would seem to be finished on May 6.

*2 : Currency reform from November 30 to December 6 in 2009. The exchange rate for old and new money was 100:1 for cash and 10:1 for deposit respectively. The limit to exchange was 200,000 won for each household during the given period of 1 week. Any money over the limit became nullified. Cash rich people’s money became scrap paper by this measure. In addition, inflation began as the value of the “won” plummeted by the currency reform. The inflation hit hard on people’s lives as it caused price rise in markets.

*3 : “70 days battle” is originated from the endeavor competition movement  which Kim Jong-il addressed to accomplish 6 years plan for economic development in October 1974. The aim of the battle was to find every unused resource for economic development and ignite a fire for “speed battle” in every economic department through skill innovation. The North Korean government informs that the industrial products were increased by 1.7 times and 6 years plan was achieved two years earlier than planned by 1,100 factories and enterprises through this battle.