Battle For Livestock and Human Manure

Each New Year ordinary North Koreans are faced with the daunting prospect of getting through two events widely known as tedious and unavoidable. The first of these is Kim Jong-un's New Year's address.

When Kim Jong-il was in power North Koreans were obliged to recite and every single line, word for word, of each editorial article of the "Rodong Sinmun" (the mouth organ of the Korean Workers' Party), "Korean Peoples' Army Periodical" and "Youth Vanguard". Now, with the passing of the baton to his son, it is the words of the younger Kim that are poured over and committed to memory with great care. Recital competitions are often held in workplaces and schools. To receive a poor mark is to be subject to criticism. Each person thus takes it upon himself or herself to recite the full text of the Great Leader's address. This annual ritual is well known to be dull, at best, but for ordinary people there is little choice in the matter.

The second issue currently frustrating many ordinary people in North Korea is the forced mobilization of the civilian population for sowing seeds before spring, and making compost for rice planting. 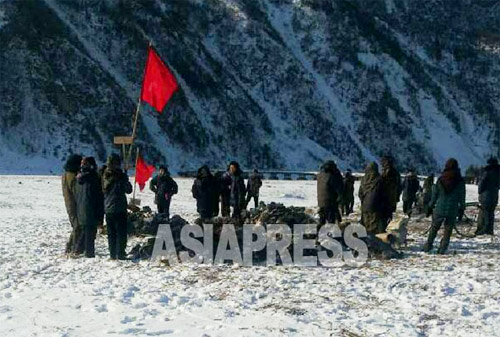 A group of women mobilized for compost collection on a bitterly cold winter's day. (Taken by Kim Dong-cheol, in the middle region of North Korea. Mid-January. 2015) ASIAPRESS 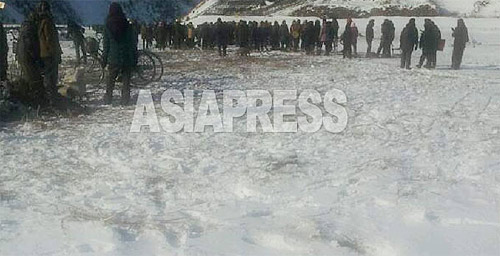 Nationwide compost making begins at the same time in North Korea. In workplaces and even in primary schools people are tasked to collect the assigned quota of livestock and human manure. It is said that all toilet pots are completely emptied during this mobilization period. (Taken by Kim Dong-cheol, in the middle region of North Korea. Mid-January. 2015) ASIAPRESS

The composts are made from animal and human manure, mixed with rice straw and dried plant matter. Workers have an assigned quota for the production of this compost. Rimjin-gang's undercover North Korean reporter, Kim Dong-cheol, who lives in the midland region of the country, explains more regarding this winter's compost mobilization activities.

"Every single family is tasked to collect compost. The quota is 100kg (=220 lb) a day and this should be met for each day, 10 days in total. It is this year's assigned quota. In the New Year's meeting of the People's Unit (NOTE: the lowest local administration unit composed of neighborhoods), it was underlined that every resident should participate in this mobilization with no exceptions. These days, there are heavy restrictions imposed in every sector of society, so I participated and took the job very seriously so as not to be marked out by the authorities."

In a large city such as Pyongyang, it is not easy to collect manure, so usually workers pay money instead of delivering compost to their workplace unit. In the countryside, it is said that compost collection can become quite competitive between people desperate to meet the quota.

Facebook Twitter はてブ Pocket Feedly
RECOMMENDATIONS
＜N. Korea Pro Report (Part 5)＞ How is N. Korea’s Economy Faring in the Face of the Coronavirus Pandemic and Continued Sanctions? A Look at the Regime’s COVID-19 Countermeasures
North Korea’s authorities continue to claim that, as of May 25, there ...
[Video Report] Kotchebi Girls, Sexually Abused and Exploited
The mid 90s’ were a chaotic period for North Korea. During this time ...
＜Inside N. Korea＞ Authorities and Families Anxious Following Mass Pardon of Malnourished Prisoners
The Kim Jong-un regime is planning a “great amnesty” or mass pardon s...
＜N. Korea＞ “Pour Shit in his Snout...Pres. Moon is a Dunce”: Profane Propaganda Documents Reveal Extent of Regime’s Hate Spreading Efforts
ASIAPRESS recently obtained an internal document of the Korean Workers...
＜Interview with N.Koreans＞ "Is it any better in Kim Jong-un Era? Not at all! Preferential treatment is given to the Party officials by sacrificing the needs of the residents in the regions outside of Pyongyang!"
2015/December/13 Edit by KANG Ji-won, defector reporter, Rimjin-gang &...
Rimjin-gang Report - Pyongyang Construction Sites to Build 100,000 Apartments (2011) North Korea
In the capital city Pyongyang, a fully-fledged construction boom has b...
Feuding Over Fuel: Regime’s Lifeline Under Threat as China Arrests Gasoline Smugglers
◆ Gas prices have stabilized- but why? North Korea has been subjected ...
Polling Stations Under 24 Hour Surveillance As The Station's Notice Boards Vandalised
The Forthcoming Election in North Korea: 2014/March/07 Written byISHIM...
＜Photo Report on N.Korea＞ China Controls North Korean Economy (1) Hard To Survive If China Places Sanctions on DPRK
2017May/15 It is obvious that North Korea is economically dependent o...
N.Korean Drug Trade Spreads to Ordinary Citizens (PART1)
2015/Jan/12 Written by PAEK Chang-ryong, a defector reporterThe rapid ...