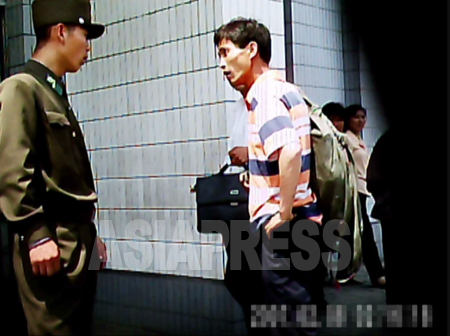 ◆All entry into Pyongyang blocked off

Reports indicate that, from September 1st, North Korea implemented special security measures to prepare for the September 9th celebration of the Day of the Foundation of the Republic. Entry into Pyongyang, where commemorative events were concentrated, was severely restricted and security was tightened near the Sino-Korean border. (Kang Ji-won)

According to ASIAPRESS reporting partners in North Korea, the issuance of travel certificates for Pyongyang was suspended entirely, preventing people and vehicles from entering the capital city. Additionally, thorough inspections were being carried out at checkpoints on roads and railroads.

Only people and vehicles registered in Pyongyang could pass through the checkpoints, which caused cargo transportation to virtually come to as top. Merchants sent goods to the cities outside of Pyongyang, such as Nampo and Pyongsong, so that vehicles from Pyongyang could come and pick them up. However, the merchants emphasized caution, saying "We are not trying to make any reckless moves during the special security period."

Next Page： ◆Police search private homes
1 2
Facebook Twitter はてブ Pocket Feedly
RECOMMENDATIONS
＜Photo Report＞ Kotchebi, the Homeless, Under the Kim Jong-un Regime (PART5) Toddlers and female Junior High School students roaming around a city. Some children have lost their legs.
2017/Jan/10 These pictures of “Kotchebi”, the homeless, were taken by...
The Changing Face of the Tuman-gang (Tumen River) - PART 1
Sino-North Korean border report: - Wire Fence Installed Along The Enti...
＜Inside N. Korea＞ “People are starving”: South to Send Support...But Will Food Reach Those Most in Need?
◆ Exploited citizens going hungry The World Food Program (WFP) and oth...
Arrest, Displacement and Suicide - The Purge of Jang's Affiliated Cadres Continues
2014/March/06 Written by ISHIMARU Jiro Editor-in-Chief of Rimjin-gangC...
＜N. Korea Interview＞ "So the sanctions will continue?" North Koreans Face Disappointment as US Summit Breaks Down
◆“But we had been expecting the sanctions to be lifted…” On February 2...
North Korea’s Second Wave? (1) Internal Documents Suggest Rising COVID-19 Cases
In July, North Korean authorities repeatedly insisted that they were s...