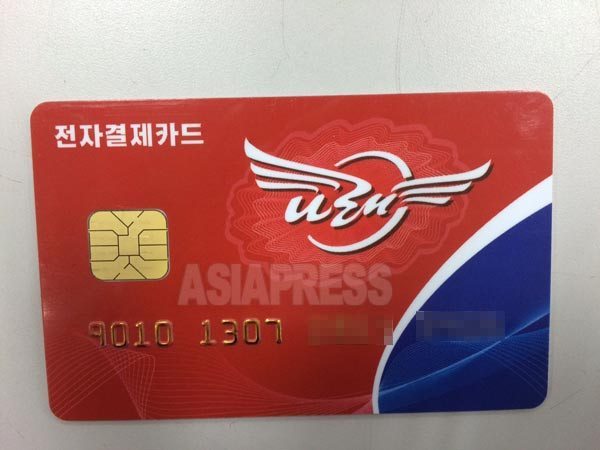 “Narae” debit card issued by the Foreign Trade Bank of the Democratic People's Republic of Korea. It is used for foreign exchange settlements. Taken by a Chinese tourist in March 2015

Following the issuance of bank cards for companies and individuals in local cities from the early 2016, the Central Bank of the Democratic People's Republic of Korea has started to install ATMs from the last fall.  According to ASIAPRESS reporting partners inside North Korea, some residents welcomed the card saying “It is more convenient,” while others showed a concern that “The state would monitor private properties” and “We don’t trust the government.”  (Kang Ji-won/Paek Chang-ryong)

Our reporting partner in Hoeryong City, North Hamkyung Province reported a change of financial system in the mid-December 2016, saying that “Recently, local banks have installed ATMs.  The number of residents using bank cards for money transfer and certain types of payment is on the rise.  At present, “Narae” debit card and “Jonsoung” cash card are issued by local banks in Chongjin City and Hoeryong City.  For the issuance of the card, one has to pay 10,000 Won and write a name, address, a mobile or fixed phone number.”  [Note: 1 USD is equal to around 8120 Won ] Related article: Rising discontent as control reinforced to prepare the 7th Workers Party Conference in May… Forced labor to the runaways from their work places and coerced savings to banks…

Now, how convenient are the bank cards?  The reporting partner explains: “Money transfer and payment can be made between those who have the same cards.  Jonsoung cash card can be used not only in a bank but also at a post office to pay telephone charges.  The fee on the money transfer is one percent, 1000 Won for sending 100,000 Won.  In the past, only big cities like Chongjin had available ATMs; however, branch offices in local cities have installed ATMs since the last autumn.  Hoeryong City has on one ATM as of now, but there will be more of them to meet the demands from the residents.”

Based on the writer’s experiences in North Korea, the entrance cards for particular organizations–such as the Grand People's Study House and the information center–were changed to the ones with IC  in the mid-2000s.  Since around 2009, IC cards for foreign currency payments have been available in specific retail shops such as Potonggang Department Store in Pyongyang.  However, only affluent people and high-ranking officials could use it.   Nowadays, the new payment system–once limited to foreign currencies–has included North Korea Won and gained popularity among residents in local cities.

In the mid-November 2016, another reporting partner, B, in a different part of North Hamkyung Province reported on the wide use of bank card that “In the past, I needed to transfer money via a post office.  It took time and they charge 10% of the principal as a fee, so I used to use a black market transfer.  The number of people using a bank card is increasing since the commission is only 1%, and they can transfer and pay money on the spot if they go to a bank.”
Related article: ＜Inside N. Korea＞ Expansion of the market economy as the driving force behind social transformation–based on sources from inside North Korea.

As a bank card has become a major transaction method, a banker is becoming an increasingly popular occupation.  The reporting partner, B, described the current situation in the North Korean society that “As banks earn commission, they distribute 20 days’ worth of rice to staff out of their own pockets every month.  Although companies earning foreign currencies are still more popular, a number of women favor the banking industry now.”
Next page: Long-held distrust and vigilance: citizens beware of the government...