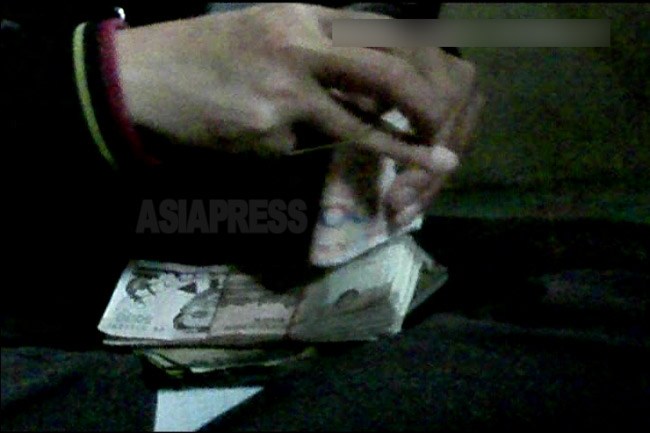 A money exchanger at a black market exchanging Chinese RMB with North Korean Won. 2013, in a northern part of North Korea(ASIAPRESS)

Long-held distrust and vigilance: citizens beware of the government.

However, some residents are cautious about using the bank cards.

A reporting partner in Musan County checked the usage of bank cards around him last December and reported the result: “Many people don’t use the card at all.  Especially, those who transfer a large amount of money–such as wealthy businesspeople, money exchangers, and traders–are afraid that the government may find out the details of their transactions.  It is because government organizations frequently censor banks.  Therefore, the majority of businesspeople would continue to use an individually-owned black market transfer of money instead of a bank card.  Transactions between state-owned companies are conducted via banks.”

Presumably, the North Korean government, by increased use of bank cards, intends to normalize the official financial system by inducing money of private financial sector into it and to restrict the non-transparent flow of money.
Related article: [Video Report] National bus network of the North Korean market economy

The public finance system in North Korea lost trust among its people as the devaluation of North Korean Won had continued since around 2000.  Also, people could not freely withdraw their deposited.  What is worse, the unexpected denomination at the end of 2009 ended was total failure–North Koreans had to exchange 1,000 Won notes for 10 Won notes.  Until now, the North Korean people don’t have trust in the finance system.

It will take time for the North Koreans, after having been betrayed by the government, to be able to use the banking system at ease.

1 2
Facebook Twitter はてブ Pocket Feedly
RECOMMENDATIONS
Special Gifts For the Worker`s Party Congress “Not enough.”: Only Toothpaste Set & Liquor
The 7th Worker’s Party congress ended on May 9. Despite initial expec...
＜Absolute Secret＞ Documents Detail Extensive, Multi-Generational Background Check Process for Kim Jong-un's Bodyguards
Internal Workers' Party documents obtained by ASIAPRESS reveal that in...
＜Latest Photo Report＞ A Trip to the North Korea-China Border (Part 1: The View Along the Yalu River)
ISHIMARU Jiro visited the North Korea-China border in early autumn las...
＜Inside N.Korea＞ Real Evaluation On Kim Jong-un By His Own People
2017/May/1 While I have worked in journalism specialized in North Kor...
＜N.Korea photo report＞A Look at North Korea's Impoverished Rural Women... Though they are producers they live in poverty due to exploitation
While North Koreans are very compassionate, there is one occupation th...
＜Inside N. Korea＞ "Show me your texts and photos": Strict Censorship of Cell Phones Comes with Threat of Death Penalty
The Kim Jong-un regime is censoring the country's cell phones with unp...
＜Inside N. Korea＞ Expansion of the market economy as the driving force behind social transformation--based on sources from inside N.Korea. (PART2)  The black market and “farmer’s market” connect. by ISHIMARU Jiro
2016/Dec/20 ◆ How did the expansion of the market economy take place?...
Possible Further Executions Related to Jang Song-taek Carried Out
Three persons - including the husband of Jang's niece, and two actress...
ASIAPRESS ARCHIVE SERVICE-Image/Footage licensing
ASIAPRESS ARCHIVE SERVICE ASIAPRESS has an IMAGE archive <footage/ ...
＜Inside N. Korea＞ Residents celebrate as Yanggang Province’s first traffic lights bring a stop to police extortion
◆Traffic police labeled ‘roadside thugs’ and 'caterpillars' In early D...