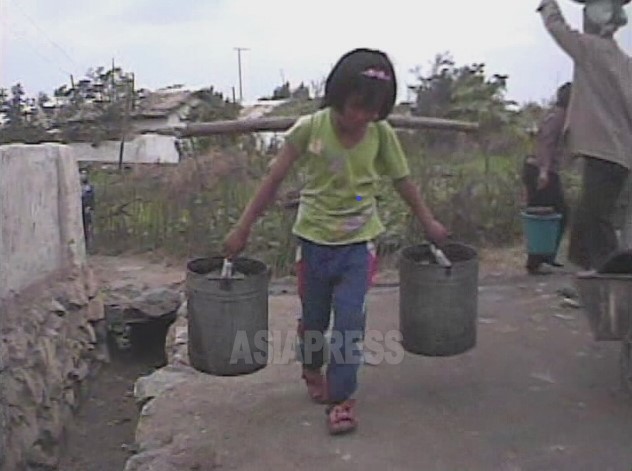 (Photo) A girl forced to collect water due to a freeze in the supply of tap water. She lifts the pales of water with all her might. Photographed in October, 2008 in South Hwanghae Province by Shim Ui-chun (ASIAPRESS)

According to a reporting partner living in the northern province of Ryanggang, the number of typhoid patients across the region has been sharply on the rise since June.

Speaking with ASIAPRESS on June 7, the reporting partner said, “Cases of typhoid were observed in late May but, since June, have shot up dramatically. According to the official quarantine agency, about 10% of residents in Hyesan City’s local political units have developed the disease. However, there have been no countermeasures, with residents simply recommended to go to the hospital to be vaccinated. They still haven’t even isolated the patients.”

Typhoid is transmitted through contaminated drinking water and food, with food and water contaminated by the feces or urine of infected individuals a typical source of further infection. As such, the disease is typically endemic to underdeveloped regions with poor sanitary conditions.

Currently, most households in the northern region of the country are not receiving power and are unable to operate their pumps.

The reporting partner explained the situation in Hyesan City, “People can get water from the tap once a day, at best. Some areas do not receive water at all. That’s why there are so many people collecting drinking water straight from the river.”

In late November of last year, typhoid was prevalent in Hoeryong, North Hamkyung Province, and Hyesan, Ryanggang Province, leading to many deaths. As such, there are a growing number of households that are buying water from local businesses, rather than taking the risk of contracting typhoid by drinking dirty water. (Kang Ji-won)

Facebook Twitter はてブ Pocket Feedly
RECOMMENDATIONS
＜Inside N.Korea＞ DPRK high-ranking state officials ordered to attend seminar against escaping the country: frequent escapes concern Kim regime
It has been revealed that the North Korean State Security Department –...
＜Inside N.Korea＞ Defense Drill For Cruise Missile Attack: Soldiers Suffer From Malnutrition, Tuberculosis and Chaos
2017/May/19 The People’s Army of North Korea have worked to reinforce...
◆ “A Taxi Driver” Gains Popularity Among North Korean Youth The Kim Jo...
＜Inside N.Korea＞ North Operates Kaesung Industrial Complex Unlawfully
2018/Jan/29 It is reported that the North Korean government unlawfull...
＜Inside N. Korea＞ Growing discontent with Kim Jong-un regime in North Korea
2018/Aug/1 Recently it seems as if North Koreans’ opinion of Kim Jong...
＜Inside N. Korea＞ High-ranking Officials and Public Largely Unaware of the Situation in Ukraine…What Lies Behind the Regime’s Silence?
While the Russian invasion of Ukraine has shaken the world and forced ...
● About Our Team - ASIAPRESS and Rimjin-gang
ASIAPRESS International ASIAPRESS started in Tokyo in 1987 as an indep...
＜Inside N. Korea＞ Killer Counterfeit: Regime Orders Urgent Recall of Dangerous Fake Alcohol
◆"Round up the fake soju!" A number of North Koreans have been sent to...
"You must start with denuclearization"...S. Korean Media Reports that Xi Pressured Kim to Give up Nukes at January Meeting
◆Recently obtained excerpts of summit suggest Kim disregarded Xi’s gui...
＜Inside N. Korea＞ Residential Electricity Suddenly Improves…Why are Some Cities Receiving 10 Hours of Power a Day?
The power supply for civilian use, known as the "residents' line," ha...