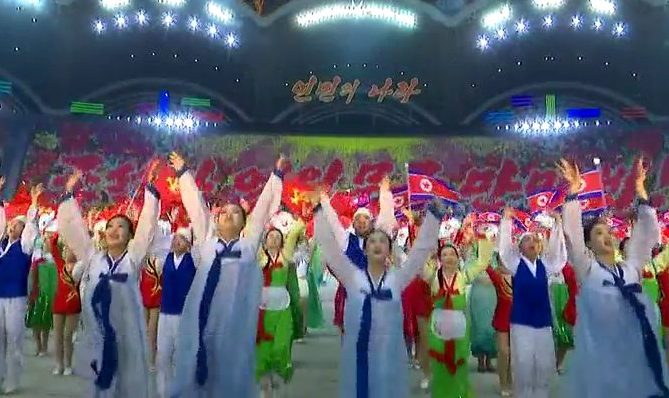 Mass Games which started on June 3. As browncasted by Chosen Central Television

A travel agency that operates tours to North Korea has stated that the daily performances of “People’s Country”, the mass games spectacle which began in Pyongyang on June 3, would be suspended from June 10. While reports state that Kim Jong-un criticized the production value of the show, it seems that financial constraints had already precluded the possibility of continued performances. It has been revealed that students, mobilized from the provinces to perform in the mass games, were suffering from hunger due to inadequately supplied meals. The regime’s financial woes appear to have prevented it from securing enough food for participants. (Kang Ji-won/ISHIMARU Jiro)

In late May, just before the mass games began, an ASIAPRESS reporting partner living in North Hamkyung province met with an official in charge of mobilizing the children to participate in the performance’s group gymnastics section. The partner reported the following.

For this year’s mass games, 60% of the students, including those selected to perform gymnastics, were mobilized from the provinces. Children from regional art troupes, army bands, and art and dance schools were brought to Pyongyang. Once in the capital, they would stay in shared accommodation for the length of the mass games.

The biggest problem the children face is a lack of proper meals.

According to a parent of an art and dance student, “It’s heartbreaking for us parents to get calls from our children in Pyongyang crying about being hungry. Our children say on the phone that each meal consists of only about 160 grams of Chinese rice and a side of preserved radish.”

Pyongyang officials in charge of the mobilized children tried to calm down the concerned parents by saying, “As they are now rehearsing, the meals are inadequate, but the supply will improve once the performances are underway.”

Money has also become a burden for the parents. A parent who sent their child to Pyongyang said, “We have to give about 400,000 won (about 55,000 South Korean won) to our children. They need between 30,000 and 50,000 won a month for costume repairs and transportation expenses. On top of that, our hungry children need money to buy bread and snacks to eat.”
Next page : A shortage of participants in the card section due to dropouts...

Next Page： ◆ A shortage of participants in the card section due to dropouts
1 2
Facebook Twitter はてブ Pocket Feedly
RECOMMENDATIONS
[Special Report] ＜Inside N. Korea＞ Shaken by Sanctions- Regime Takes a Direct Hit as Pyongyang’s Privileged Feel the Pressure
On February 27, Kim Jong-un and Donald Trump met in Hanoi for a secon...
＜Photo Report on N.Korea＞ Soldier’s Hard Life 5. Poorly Nourished Young Soldiers: Soldiers’ hunger started from 80’s. (4 Photos)
◆ Hunger of soldiers started from 80’s.Lee Sang-bong, a defector from ...
＜Inside N.Korea＞ Total War Is Impossible for N.Korean Army
2017/May/11 Many Japanese media in the recent month have produced th...
"Our Life in Pyongyang Is Not So Easy As You Imagine" - Even in the highest quality apartments in Pyongyang running water is irregular and unreliable
Rimjin-gang 2014/January/20Even in the highest quality apartments in P...
＜Inside N. Korea＞ Drug Trade: Addicts and Traffickers Turn to Opium as Methamphetamine Prices Skyrocket Due to Border Blockade
The price of methamphetamine trafficking has skyrocketed in North Kore...
＜Inside N. Korea＞ Power Struggle: Fearing Collapse of Power Grid, Regime Orders Crackdown on Electricity Bribing
Reports are coming in from all regions of North Korea that the power s...
● About Our Team - ASIAPRESS and Rimjin-gang
ASIAPRESS International ASIAPRESS started in Tokyo in 1987 as an indep...
Arduous Starch: Soaring Price of Potatoes Sees Anxious Poor Hoard Supplies and Panic Buy
According to a reporting partner in Hyesan, Ryanggang Province, the co...
＜Inside N. Korea＞ Costly Contagion: Typhoid Spreads to 10% of Border Population as Impoverished Residents Drink Straight from Rivers
According to a reporting partner living in the northern province of Ry...
With time running out for the aging families of Japanese abductees, the Abe administration must lay out a roadmap for settlement talks with North Korea (ISHIMARU Jiro)
January 12 marked the 59th birthday of Keiko Arimoto (有本恵子), a Japanes...