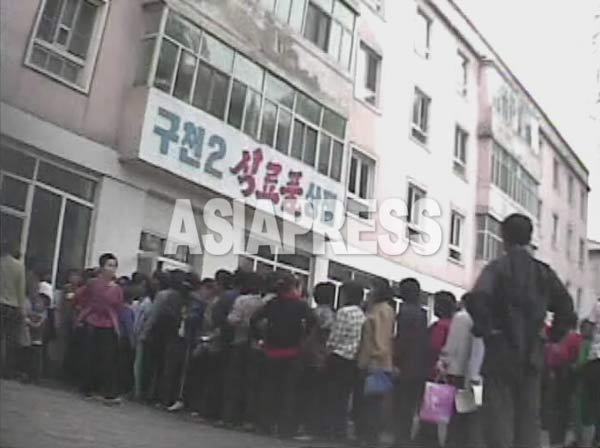 A queue at a North Hwanghae grocery store. People are required to queue when there is a special allocation of rations. Taken by Shin Eui-cheon at North Hwanghae Province, September 2009. (ASIA PRESS)

The 7th Worker’s Party congress ended on May 9. Despite initial expectations, most people did not receive the special commemorative gifts supplied by the government. Those who did have voiced discontent regarding the poor quality of the gifts. On May 11 an ASIAPRESS reporting partner explained:

“After the 70-day battle, the government supplied toothpaste, a toothbrush (made in North Korea) and a bottle of liquor to every household.”

But because most North Korean people are accustomed to better quality Chinese products, they regarded the toothbrush set with disappointment. In addition, the government required them to pay for the supplies, which brought further criticism.

“People at a nearby collective farm didn’t go to pick up the supplies as the authorities required them to pay 1,500 Won (U$0.18). I didn’t go either.” 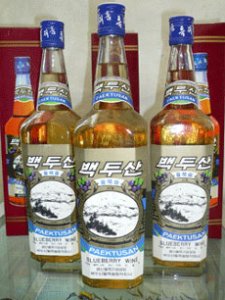 All the North Korean people were mobilized for the historic Worker`s Party congress. But the rewards fell short of expectations. That is the reality of the Kim Jong-un regime.

It is not confirmed whether Pyongyang and other regions got the same supplies.

According to the ASIAPRESS reporter, a school uniform was supplied to his daughter in elementary school for free, on April 15 (the birthday of Supreme Leader Kim Il-sung), before the Worker`s Party congress. The quality of the uniform was also extremely poor He said, “I really felt really sorry for my daughter in her new uniform. The color of the skirt is dull grey and the fabric is of a poor quality. It is similar to the clothes old ladies wear.”

Facebook Twitter はてブ Pocket Feedly
RECOMMENDATIONS
Column –Voices from inside N.Korea, ISHIMARU Jiro
Among East Asian countries, only the people of North Korea have been l...
＜Inside N. Korea＞ A sergeant dies in the act (of stealing) ... Desperate soldiers raid smuggled goods to survive
◆State agencies involved in smuggling Hit hard by the United Nations' ...
Program for the Legitimization of Kim Jong-un Regime
2013/October/23 Written by ISHIMARU Jiro, Editor in Chief, Rimjin-gang...
Peddlers Carrying the Future of N.Korea on Their Backs
The Daily Life of North Koreans: Peddlers Carrying the Future of North...
＜Inside N. Korea＞ Homework and Housework: Children Forced to Do Chores and Study From Home with All Schools Closed Due to COVID-19
◆ Families become desperate as economic threat looms larger than risk ...
With time running out for the aging families of Japanese abductees, the Abe administration must lay out a roadmap for settlement talks with North Korea (ISHIMARU Jiro)
January 12 marked the 59th birthday of Keiko Arimoto (有本恵子), a Japanes...