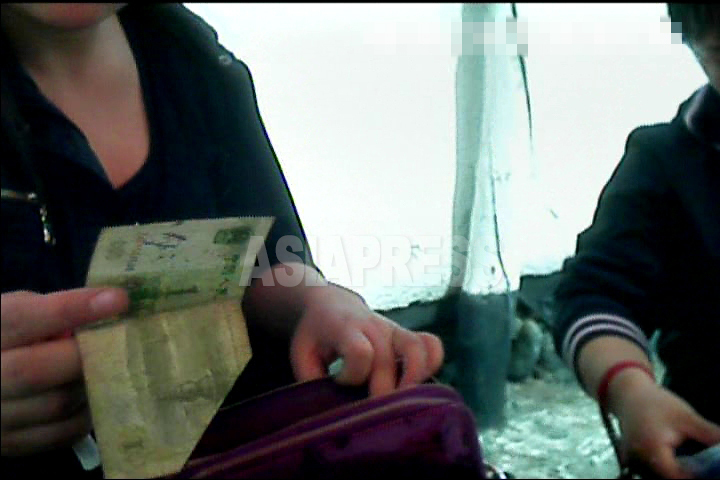 (Photo) A street vendor trading in Chinese yuan. She gives back a 1 yuan note in change. Photographed in Ryanggang Province in October 2013 (ASIAPRESS)

On August 6, the exchange rate of the North Korean won against the US dollar and Chinese yuan plunged by 10%, only to rebound on August 13 by 11%. Relaying information, ASIAPRESS reporting partners in North Hamkyung Province and Ryanggang Province surveyed market exchange rates in the northern region of the country.

According to the official exchange rate, set by the North Korean authorities, 1 US dollar is worth roughly 100 won. In reality, however, the exchange rate is based on the trends of the international foreign exchange market and fluctuates on a daily basis.

In late November, 2009, the North Korean authorities suddenly carried out “currency reform”, slashing the won to just one-hundredth of its original value. Citizens had only a week to exchange their money for the new currency, at a limit of 100,000 won at a time, before the money would become worthless. Economic chaos ensued, as well as sudden hyperinflation.

The won’s decline began to level off, however, in mid-2014. Since then, the exchange rates of won to US dollars and Chinese yuan have remained fairly steady.

Though it had stabilized, the North Korean people lost confidence in their country’s currency. These days, as a matter of course, not only personal transactions, but transactions between enterprises as well, are conducted in foreign currencies.

In addition, the massive impact of the economic sanctions, imposed by the international community since late 2017, cannot be overlooked. In 2018, the country lost close to 90%, year-on-year, of its overall trade. Though the foreign currency crisis is getting worse day by day, strangely, the North Korean currency is remaining stable.

This shift coincided with the US government’s announcement, on August 13, that it would delay the imposition of additional tariffs on China. The decision immediately caused stock prices to rise worldwide and the value of the US dollar to climb by 1%.

For now, the reason behind the North Korean won’s sudden drop in value remains unclear, as does the question of whether the currency’s subsequent rise will continue. (Kang Ji-won)