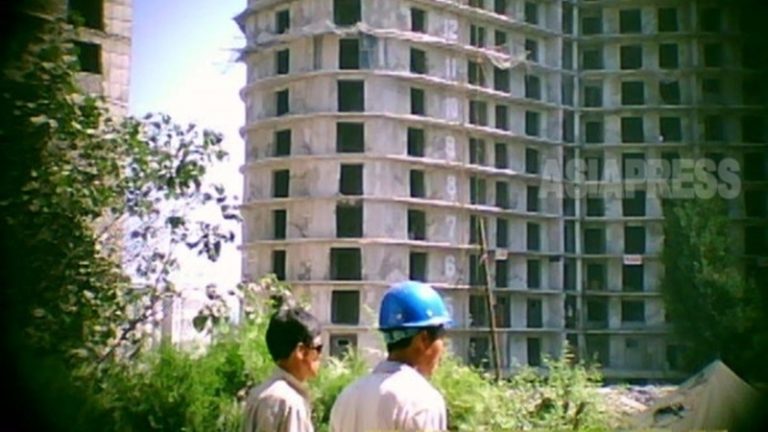 Apartment prices are reportedly plunging across North Korea in the wake of economic sanctions. To investigate, ASIAPRESS conducted a survey in Pyongyang, Hyesan- a city in the northern province of Ryanggang, and Hoeryong- a city in the central province of North Hamkyung. The survey found that apartment prices in Pyongyang, in particular, took a heavy hit. (Apartments are bought and sold in Chinese yuan in the central and northern regions of the county and in U.S. dollars in Pyongyang. In our report, however, all prices appear in South Korean won.)

◆ Prices in Pyongyang cut by more than half

In June and July, ASIAPRESS met with two Pyongyang trade officials on business in China. They said that, as apartment prices in Pyongyang vary widely depending on the area, they would limit their discussion to the high-end apartments in the city center. For background, though many high-rise apartments have been built over the last 7 years under Kim Jong-Un’s orders for the redevelopment of Pyongyang, most of the city’s apartment buildings were built in the 70’s and 80’s.

The 2 men gave near-identical accounts of the situation, with their descriptions yielding the following details:

Large, 100 square-meter apartments in Pyongyang’s most expensive, downtown area used to cost 81-97 million won in 2016, before the sanctions were tightened. Now though, prices have plunged to 21-48 million won, with some apartments costing 50-70 percent less.

In addition, apartment prices in the downtown area have taken a big hit due to stronger security measures. One of the trade officials said, “In June, under direct orders from Kim Jong-un, the authorities took cement and blocked the verandas of all apartments that looked out onto important buildings such as the Workers’ Party building. They were worried about snipers. Thus, the prices of some of the best apartments in the area have plummeted, with no one willing to buy them for even just a million won.”
Rimjin-gang Report - Pyongyang Construction Sites to Build 100,000 Apartments (2011) North Korea

The verandas of downtown apartments were blocked by the secret police to stop owners from coming out, but the concrete is also blocking light from coming in. With no natural light coming through the blocked windows, the apartments now have no interested buyers.

According to the South Korean Trade-Investment Promotion Agency (KOTRA), North Korea’s trade volume in 2018 fell by 48.8% from the previous year, with exports falling by about 86% and imports by 31%. International sanctions have completely blocked exports of coal, minerals, and seafood products, having a huge knock-on effect on Pyongyang’s apartment market, as profits from these industries were mostly funneled to the capital.
＜Inside N. Korea＞ State Welfare: Citizens Forced to Enroll in State Insurance Plan to Prop up Government

Next page : ◆ The situation in the trading city of Hyesan

Next Page： ◆ The situation in the trading city of Hyesan
1 2
Facebook Twitter はてブ Pocket Feedly
RECOMMENDATIONS
＜Inside N. Korea＞ Housewives-turned-dealers Sell Meth Hidden in Masks as Drug Use Reaches a High under Desperate COVID-19 Conditions
Methamphetamine crimes are getting worse under the influence of COVID-...
Mass Starvations Occurring in the Breadbasket [pdf]
Mass Starvations Occurred in the BreadbasketJanuary 2013 Rimjin-gang -...
＜Inside N. Korea＞ Costly Contagion: Typhoid Spreads to 10% of Border Population as Impoverished Residents Drink Straight from Rivers
According to a reporting partner living in the northern province of Ry...
＜Interview from Inside N. Korea＞ People are afraid of starvation if cities are locked down…PCR tests don’t exist…ASIAPRESS interviews a N. Korean to better understand the situation in the country and how people are feeling
North Korean state-run media has been reporting that the number of pe...
＜Inside N. Korea＞ A recent flood has left thousands dead: following the flood mass forced-migration of the poor into the affected area. 'Entire villages have disappeared. '
2016/Dec/1 Toward the end of August this year, 2016, a large flood oc...
＜Inside N. Korea＞ Minus 30 Degrees Celsius! Residents Live With Neighbours to Save on Heating as Coal is Rationed to Workplaces
Winters in northern North Korea are cold. Especially in the upper reac...