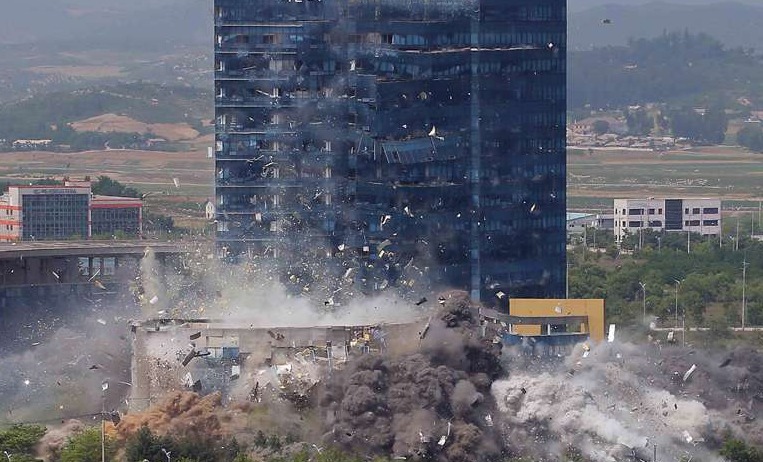 The demolition of the inter-Korean joint liaison office. Photograph originally published in the June 17, 2020 edition of the Rodong Sinmun

With the Kim Jong-un regime deciding to destroy the joint liaison office in Kaesong, inter-Korean relations have entered an extremely difficult phase of confrontation. But how is the recently-launched anti-South Korean campaign going down with the North Korean people? What is the current atmosphere in the country? On June 18, the day after the destruction of the liaison office, ASIAPRESS asked reporting partner “B”, a senior official of the Workers’ Party living in North Hamkyung Province, about the local reaction to recent events. (ISHIMARU Jiro/Kang Ji-won)

◆ Some citizens worried about war

-- The joint liaison office was blown up. Did you see it on the news?

B: Yes, I saw it. There are some people here that are worried that this will immediately start a war.

-- You needn’t worry about there being a war just yet.

B: I know there is no way the country will go to war. But people who don’t quite have a grasp of the situation are thinking, “The North and South were saying that they wanted to get along well and now we’ve gone ahead and suddenly blown up the liaison office, so anything could happen.”

-- Do you think the North Korean defector groups that were sending over propaganda leaflets are at fault for the destruction of the liaison office?

B: Everyone thinks so. People here were so happy when the inter-Korean summit happened and thought that unification could be just around the corner. The atmosphere was so great and, when President Moon visited Pyongyang, we honestly thought unification was here. But, in the end, it all came to nothing. We are questioning if, during that whole time, South Korea was doing nothing but sending over propaganda leaflets.

-- Do you understand why North Korean defectors in South Korea are sending over propaganda leaflets?

B: As I work with you, I am well-aware of the external situation and understand why they send the propaganda leaflets. I would be the first to distribute such leaflets. To be honest, we are all just human. That extends to even the one we call our “sun” and “general” (Kim Jong-un).

-- How is the atmosphere in North Korea right now?

B: Right now, officials are encouraging us at meetings to be prepared for backlash and to maintain our loyalty. Yesterday (June 17), at the local people’s unit (inminban) meeting, the inminban leader told us that the situation is quite tense due to the anti-South Korea campaign and that our mobilization posture must be maintained.

※ Organizational life
In North Korea, everyone above the second grade of elementary school is obliged to belong to an organization. There, they are mobilized for ideology examinations and lectures as well as for labor. This is referred to as organizational life and, if one neglects their duties connected to it, they will be subjected to harsh criticism and punishment.