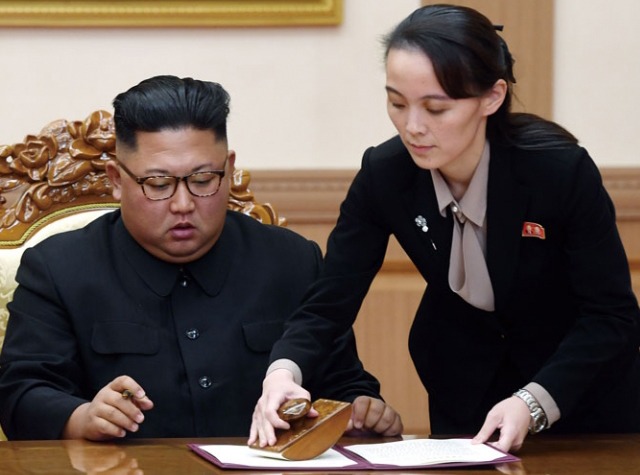 On June 5, North Korea’s state media, including the Korean Central News Agency, reported a statement by Kim Yo-jung, now First Deputy Director of the Central Committee of the Workers’ Party.

In the statement, Kim Yo-jung harshly criticized North Korean defector groups in South Korea for sending defamatory leaflets to the North in balloons, condemning the groups’ members as “garbage” and “mongrel dogs.”

This is the third time a statement has been released by the regime through Kim Yo-jung. Earlier this year, on March 3, she released a scathing criticism of the South Korean presidential office for its protest of North Korea’s missile test launch. A short while later, on March 22, she released a second statement, this time praising President Trump for sending a personal letter of gratitude to her brother, Kim Jong-un.

Kim Yo-jung’s latest statement, however, is far different from those she released in March. With her latest remarks delivered at the level of a ruling figure, Kim Yo-jung is being introduced as a top leader.

What is unusual is that the regime’s department for managing relations with S. Korea, the United Front Department, issued a follow-up statement the next day, declaring that the people must take Kim Yo-jung’s words to heart and discuss its contents. The statement also stated that Kim Yo-jung is officially “overseeing relations with the South.”

The statement by the United Front Department also proclaimed that, “as first deputy director of the department, Kim Yo-jung has given orders for carrying out the measures alluded to in her address.”

It is noteworthy that the statement referred to “orders” given by Kim Yo-jung. In North Korea, it is only the supreme leader who can give such “orders.” (Though such an expression is also used to refer to orders received through the central party.)

There are indeed a few terms which are used solely in relation to North Korea’s leaders. For example, the term “교시” (teachings) is only used to refer to the words of Kim Il-sung. Kim Jong-il and Kim Jong-un’s remarks are referred to differently as “말씀”. The words “방침” (policy course) and “비준” (ratification) are also terms that are used specifically in relation to Kim Jong-un.

When Vice Chairman Park Bong-joo of the Workers’ Party Central Committee made a visit to the Hwanghae Steel Company, the less-rarefied expression “현지료해” was used. Because the term “지시” (command) is another term that can only be used in reference to Kim Jong-un, it was instead written that Kim Bong-joo “emphasized the intentions of the Workers’ Party.”
Next page :◆ North Korea’s Supreme Code...