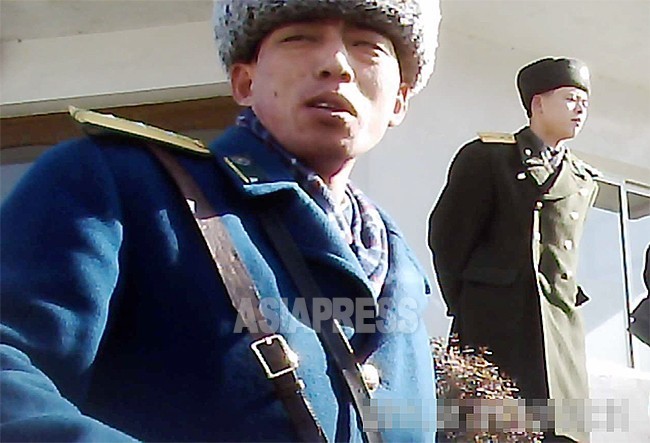 (Photo) A police officer stands at a checkpoint. Photographed in South Pyongan Province in January 2011 by Kim Dong-cheol (ASIAPRESS)

◆ Conducting house-to-house investigations without a warrant

In North Korea, copies of dramas and movies from abroad, including South Korea, are regarded as “impure goods” and are strictly banned from being sold or viewed. Last year, a crackdown on foreign media was tightened and random searches of neighborhoods were conducted without warrants, leading to many arrests around the country. Police officials would blatantly demand bribes from those caught in violation of the law and residents became deeply dissatisfied with the situation.

In early August, a 22 year-old man was arrested and taken into custody for watching a Chinese movie at his home in Hyesan City, near the Chinese border. During the investigation, however, the man committed suicide by throwing himself off the top of the investigative agency’s building. According to a reporting partner, the incident completely shocked local residents.

The organization that leads the crackdown on the spread of foreign media and other acts that “disrupt the socialist order” is referred to as the “109 Sangmu” and is jointly filled with personnel from the Workers’ Party, the military, the police, the prosecution, and the secret police.

The building occupied by the “109 Sangmu” is located in Shinheung-dong, in the center of Hyesan City. This was where the 22-year-old man was being held after authorities had burst into his house and arrested him on suspicion of watching a Chinese film. During his detention, the young man was beaten and poorly fed, which apparently led him to jump from the building and kill himself.

Shortly after, the young man’s family gathered in front of the building, weeping and shouting, “Save our son.” The scene apparently drew much attention from the local community.

NextPage: ◆ Regime extremely wary of information from the outside world…

Next Page： ◆ Regime extremely wary of information from the outside world
1 2
Facebook Twitter はてブ Pocket Feedly
RECOMMENDATIONS
＜Inside N. Korea＞ Military Cuts (Part 2): Frustrations Rise Amid Forced Deployment of Discharged Soldiers to Farms and Coal Mines
The Kim Jong-un regime has decided to drastically reduce the number of...
＜Inside N. Korea＞ Electricity Situation Deteriorates Further as Equipment Remains Stuck in China… “Even in the city center supply is limited to one or two hours a day”
Sixty to seventy per cent of North Korea's electricity comes from hy...
＜Photo Report＞ People are exploited in mobilized labor (2) Recorded women’s complaining voices; “This is all free labor,” “Everything is taken by the high ranks”
The mobilized labor is performed by the unit of work place and school....
＜Inside N. Korea＞ Hundreds mobilize in Hyesan to rally against fortune-telling and drug use
In Hyesan, North Yanggang province, fortune-tellers and drug users wer...
＜Inside N. Korea＞ The maximum penalty for the "Korean Wave Suppression Act" is death. Still, K-pop is popular among young people.
"These days, Hallyu culture, which is popular among my daughters' gene...
＜Inside N. Korea＞ Power supply to northern regions cut off due to Samjiyeon construction project
Since late October, the power supply to residents in the northern regi...