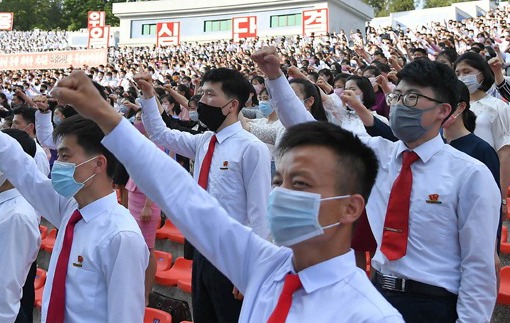 A rally organized for youth organizations. Its slogan reads, “Tear the defectors to death.” Photograph originally published by the Rodong Sinmun on June 4, 2020

According to a woman who works in the market and is a member of the Women's Alliance, who reported to ASIAPRESS on June 15, "They are calling defectors 'traitors' and 'scum'. Because of this, mothers with children who have defected cannot raise their heads at daily meetings. A few days ago at the market, there was a customer who burst into tears because a merchant had called them 'human scum' for being related to a defector."

If a family’s relative is discovered to have defected, the entire family is usually banished from Pyongyang to the provinces. Once in a provincial city, the outcast family will be subject to strict surveillance and scrutiny, though they are seldom placed under arrest.

As of 2020, the total number of North Korean defectors in South Korea stands about 35,000. In addition, there are about 200 defectors living in Japan. Many of these people send remittances through brokers to their relatives in North Korea.

After the UN Security Council tightened sanctions in 2017 and the economic recession became serious, people related to defectors in the South became objects of envy.

The reporting partner explained, “These days, people with relatives in South Korea are the richest ones around. When they come to the market, merchants even tell them, ‘You can buy now and pay later.’ Everyone is struggling due to the coronavirus but those with relatives in South Korea are doing well. Everyone was envious of them. But that has now changed. They’ve become the targets of hatred, harassment, surveillance and criticism. They now live in silence.”

Kim Yo-jung is currently leading the campaign against North Korean defectors to the South. It is said that the slogans of the campaign, which include “death to defectors” and “defectors are scum,” are inciting hatred.

With life worsening due to the economic effects of the coronavirus, the envy that North Koreans felt towards those with relatives in the South has now turned to hatred. (Kang Ji-won)

Facebook Twitter はてブ Pocket Feedly
RECOMMENDATIONS
〈Photo Report 3〉Widening Gaps - The Privileged Enjoy a Luxurious Life And the Homeless Suffer Harsh Days
2011/December/15 Report by Gu Gwang-ho (June, 2011) Our country's TV n...
＜Inside N. Korea＞ "Our expectations were foolish"...Trade Officials Disappointed by Breakdown at Hanoi Summit
◆It would have been better to threaten the U.S. than to have the summi...
＜Inside N. Korea＞ Squelching the Grapevine: Secret Police Mobilized to Stem Rumors of Kim Jong-un's Ill Health
◆ Rumors spread as the authorities stay suspiciously silent According ...
＜N. Korea＞ Strict Coronavirus Prevention Measures Result in 99% Year-on-year Drop in Trade for October
North Korea's trade with China in October decreased by 99% compared to...
search
...
The Weakest Won: Markets Run Entirely in Chinese RMB as Shoppers Abandon their Sanctions-Hit Currency
On August 6, the exchange value of the North Korean won took a massive...