“The 7th Korean Workers' Party congress,” is the biggest fair since the inauguration of Kim Jong-un regime. It is reported that information about the congress is strictly kept confidential; the participants of the congress were prohibited from having a cell phone, being left without any notice about the itinerary. (defector reporter - Kang Ji-won and Paek Chang-ryong) 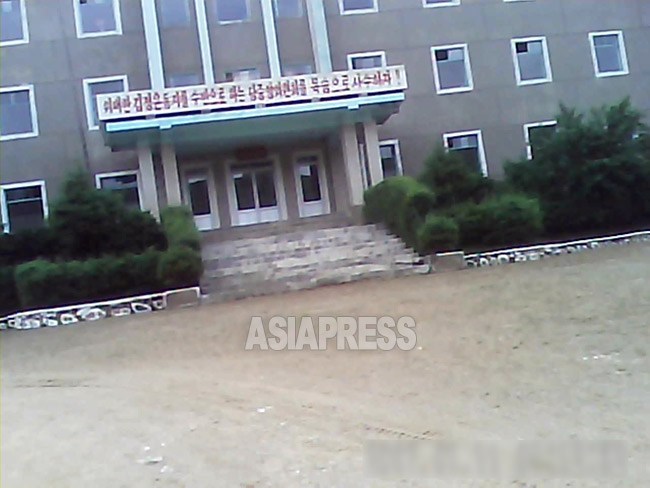 Slogan: “Let’s guard, with our lives, the Central Committee of the Party with the head ‘Great Comrade Kim Jong-un!” Taken by ‘Mindulle’ at Hyesan City of Yanggang Province on September 2013

After the closing of the KWP congress, a couple of reporting reporters from North Hamkyung Province reported on May 11, 12 as follows:

“It was said that the participants gathered at Province and departed for (Pyongyang), but we didn’t know when and how. They didn’t allow carrying a cell phone not to be able to contact family, or making a call at Pyongyang.”

What ‘Province’ means here is Cheongjin City of North Hamkyung Province where the province capitol is located.

Information about the congress has been strictly kept confidential for security reasons. Selection of the participants has been made through two tier system, but the second tier which was supposed to hold at Pyongyang was abruptly cancelled on early April. They also declared a special security period from May 2-6 without notifying any deadline of the Worker`s Party congress , just commencing on May 6. But suddenly right after opening the congress, they extended the period until May 10. 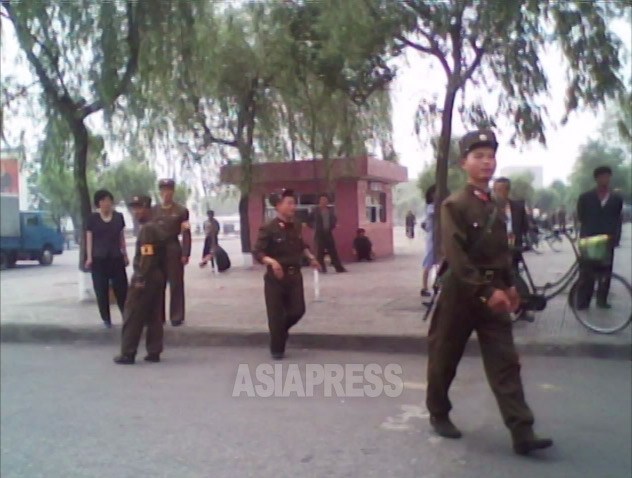 Soldiers are deployed for vigilance, which is familiar sight in North Korea. Taken by Kim Dong-cheol at Pyongsung City of South Pyongan Province on June 2010. (ASIAPRESS)

It is certain that this kind of disconcertion is for the security of Kim Jong-un. It is called ‘Number 1 Event’ at which Kim Il-sung, Kim Jong-il or Kim Jong-un attends. A defector from North Korea who had attended several times at ‘No1 Event’ said “It is normal to pay great attention on this level of national event” and testified as follows: “No participants without exception receive any details of the event in advance. More than four times of body search is done by agents of the Security Forces (Police), the State Security Department (Secret police), and its Event Department (In charge of No 1 Event) on participants’ way to the venue. Any metal or hard material including cell phone can’t remain in pockets. It is because, so called ‘the security for the head of revolution members.”

Although the foreign reporters to report the Worker`s Party congress were heavily checked for their belongings, it is not comparable what the residents had experienced for security checks. It is certain that the people in North Korea had greatly experienced inconvenience due to the vigilance and security.

Facebook Twitter はてブ Pocket Feedly
RECOMMENDATIONS
＜Inside N. Korea＞ More Elderly and Children Begging in the Streets…Girls at Greater Risk of Sexual Abuse
The population of vagrants, known as "kochebi," has been on the rise ...
＜Inside N. Korea＞Poverty Forces Rural, Underage Women into Prostitution: Regime Responds with Rallies and Police Stings
◆ Dragged before a crowd to be condemned Authorities are stepping up a...
Individual transport of grains strictly prohibited ... Private distribution to cities and theft from fields to be highly punished
In North Korea, where harvest is in full swing, the government has dec...
＜PHOTO REPORT＞Sino - N.Korea Border: ［PART2］A Sign of Late Spring In the Border Town of Hyesan
2014/April/19 (This report first appeared in the Korean and Japanese e...
＜Inside N. Korea＞ 22-Year-Old Man Jumps to his Death Following Arrest For Watching Foreign Film, Leading Bereaved Family to Rise in Protest
◆ Conducting house-to-house investigations without a warrant In North ...
The goal of N. Korea’s missile and nuclear development is to perpetuate the rule of the Kim family…The regime is ignoring the existence of its starving population ISHIMARU Jiro
Starting in late September, North Korea fired off a succession of ball...