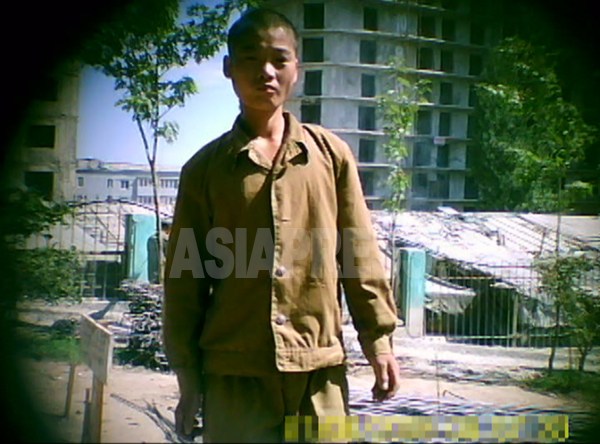 Mobilized Storm Trooper of the Youth Union for construction of 100,000 households in Pyongyang. Taken by Koo Gwang-ho at Daedonggang District in August 2011.

The Youth Union(*), an umbrella social group of DPRK Worker’s Party, is strictly checking teenagers for their cloths or whether they have put on Kim Il-sung badge at market places or on street since March. Violators are often moved to remote region for labor without a chance to notify their family. The parents of the detainees are protesting together at the Party office. Followings are reports from reporting partners in North Korea. (ISHIMARU Jiro/ Kang Ji-won)

Our reporting partner in North Hamkyung Province said “subjects of control are tight pants such as jeans (called ‘pants without line’), dyed hair with yellow or brown color (‘soaked in capitalist culture’).”

There is a similar report from Yanggang Province. Reporting partner B in Hyesan City reported the target costumes for cracking down are as follows; “Blue jeans, tight cloths, ponytail hair style and dying are the subject of control. Earrings are fine but piercing is prohibited. They also check on whether they are wearing Kim Il-sung badge or not.”

The reality is that the caught juveniles are legally arrested and sent to the labor site. ‘A’ said “Storm Trooper office of the Youth Union detains caught youth up to 30 and then sent them to ‘6.18 Storm Trooper’ in Kangwon Province.”

‘Storm Trooper’ is a labor force formed to work for large construction projects of the nation. They are organized and managed under the Youth Union and workplaces as a work force for the construction of rail way, power plants, and so on.

‘6.18 Storm Trooper’, belonging directly to the Worker’s Party, was organized by the order of Kim Jong-il to construct Samjiyon District on June 18, 1999. Each workplace gets the allotment of personnel to dispatch and the base is Kangwon Province.

Next Page： ◆Group protesting by parents to get their kids back.‘A’ continues “The caught juveniles, regardless of their gender, are sent to the trooper office without a chance to notify their family. Parents, being worried about their kids who didn’t come back home, can finally learn where their kids are when they are informed to go to the Youth Union from the securities office.ASIA Press asked another reporting partner ‘C’ in North Hamkyung Province for investigation and got a reply on April 12: “The parents couldn’t just sit and wait when their kids are arrested. Every day they shout or cry out to get their kids back in front of XX District Party office. There was a group protest of 15 parents on April 2. The Party notifies the arrest of the kids to their parents who are police officer, high ranking official, or rich and requires them to pay a fine of 800,000 won (U$100) for the release of those kids. Poor parents are wailing and protesting; Is it right to take those kids from families without power like a piece of luggage? An acquaintance, whose daughter was arrested, said that he was told from the security office, “Educate your kid well! If you want to see her, go to ‘6.18 Storm Trooper.’What on earth is ‘6.18 Storm Trooper’? Reporting partners explain as follows;“If you were taken there, you have to work for six months at least. It is a military life. The Youth Union sends violators of public morals to the Trooper as they can hardly find any applicants for them. (‘B’)“The detainees become half-dead as they have to work long hours for a lightening construction with a meager meal with salt soup. This is my first time to see this kind of ruthless mobilization (for the Storm Trooper). It seems certain that there was an order from the superior office since the mobilization is happening everywhere.” (‘A’)◆Is the mobilization for the lightening construction for the preparation of the Party Conference?
1 2 3
Facebook Twitter はてブ Pocket Feedly
RECOMMENDATIONS
The lockdown in Hyesan suddenly lifted after only two days, due to strong opposition
Hyesan’s lockdown was suddenly lifted on the evening of March 4, just ...
Compulsory Collection of Harvest for Military Supply - Farmers' Discontent Growing
2014/January/29 Written by PAEK Chang-ryong . a defector reporter. &lt...
[Video Report] Parade Drill by Female Students
◎ASIAPRESS rimjingang YOUTUBE playlist Reporter, Lee Jun of ASIAPRESS,...
★★★ASIAPRESS ARCHIVE SERVICE-Licensing Fee
LICENSING FEE The client shall agree to all articles of the Conditions...
＜Inside N. Korea＞ “No plan, No policies”: Residents Confounded and Critical after Kim Forgoes New Year Address
For the majority of North Koreans, the New Year kicks off with a tedio...
● About Our Team - ASIAPRESS and Rimjin-gang
ASIAPRESS International ASIAPRESS started in Tokyo in 1987 as an indep...